The prospect of facing the 5-1 MacEwan University Griffins of Edmonton — the stiffest test of the season — won’t change the action plan of the UBC Okanagan Heat (5-1) women’s basketball team.

In fact, rookie coach Claire Meadows will be looking for even more of what earned her team a sweep of the visiting Mt. Royal Cougars on the past weekend, and extended their winning streak to a school-record five CIS Canada West games. 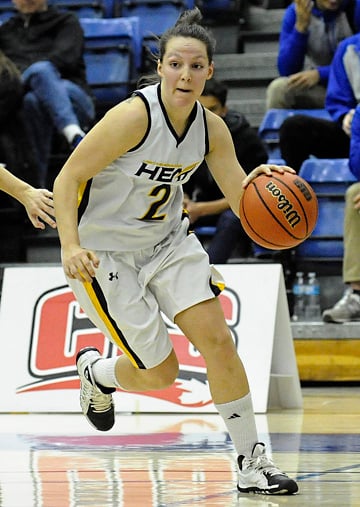 “Since the beginning, we’ve stressed it’s our work ethic and defence that’s going to define us,” said Meadows following the Heat’s 64-42 to triumph over the winless Cougars on Saturday that came on the heels of their 70-50 victory on Friday. “The girls have been working hard and things are coming together, but we know we have to keep on the same path and be even more consistent over 40 minutes — try to limit the dips in our offence — if we hope to compete against a well-rounded squad like MacEwan.”

For a team short on star power, the Heat’s offence is driven by its tenacious defensive effort, generated by fresh legs. In both games against Mt. Royal, nine players received more than 15 minutes of floor time, while 12 players scored at least two points.

“Because we have faith in everyone, we can put pressure on the whole game,” noted Meadows. “We’ve been wearing down teams, especially in the second half, and taking advantage of their fatigue.”

Meadows says she’s “quite happy” having the scoring spread out among so many different players. 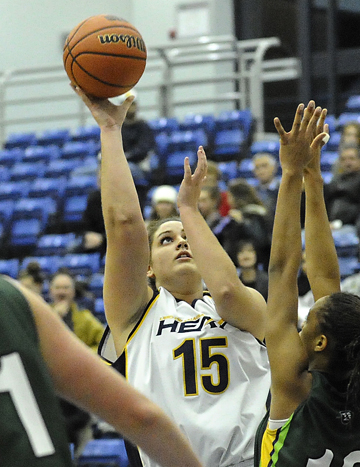 “We have girls who can do a lot of different things for us on the court, so it’s luxury to know I can go with different looks in varying situations throughout the game.”

The first-year coach also knows it will be difficult for opposing teams to get a read on her lineup.

“With the scoring so spread out, it’s tough for coaches to scout us,” said Meadows. “That’s certainly a plus for us”

Saturday’s game at UBCO was a good example of the depth and versatility of the Heat, as the Heat dominated Mt. Royals despite no one on the roster making it to double digits.

While Meadows is quick to stress the team concept, she reserved some special praise for Aulin-Haynes, a 6-foot-2 freshman from Argyle Secondary in North Vancouver.

“It’s been tough for Robyn, having to go through two ACL injuries and then fracturing her ankle, but she’s come back to make an immediate impact for us,” said her coach. “She was a difference-maker in her CIS debut (Nov. 13 vs UNBC) and she now gives us a nice presence inside.” 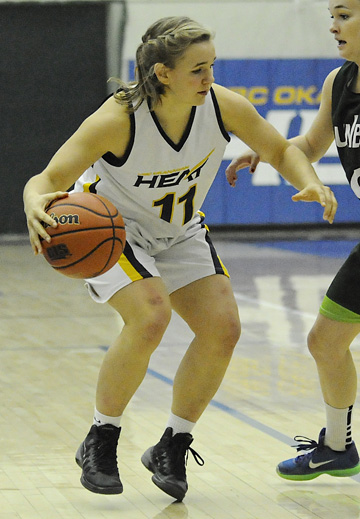 On Friday, Emily Kanester of Vernon led the offence with 13 points in 22 minutes of play. Meadows has been impressed the with fourth-year VSS grad’s poise and leadership.

“Emily as been very consistent for us and has been shooting the ball well, particularly from the three. When she has the ball in her hands, I don’t have to worry. She brings composure and a good IQ to our offence — as well as making nice reads on defence.”

As for local talent making a stellar contribution, Meadows needs to look no further than Immaculata High School grads, Olivia and Emma Johnson.

Honing their defensive skills under the tutelage of veteran coach Dino Gini at Immaculata, the Johnson sisters have made a relatively smooth transition to the CIS and Meadows’ defence-first philosophy.

“They’re complete energy givers,” says Meadows. “It’s rare for a coach to have two players like that who give every ounce of energy and leave it all on the court on such a consistent basis. They set a great example and their play rubs off on their teammates. We now have several players in the lineup who we can put up against an opponent’s best player and have them get into their heads with the pressure and tenacity.”

That will be a big part of the plan when the Heat go up against MacEwan on Friday and Saturday in Edmonton.

“These five wins have been a good confidence builder for us, but we’re still going into the games with McEwan with an underdog mentality — needing to fight for every inch. It will be interesting to see what we can do.”