Holding the upper hand on the Kelowna Chiefs during the regular season, the Summerland Steam continued the trend in the first round of the Kootenay International Junior Hockey League to eliminate their Okanagan Division rivals on Tuesday.

A 3-0 victory over the Chiefs at the Rutland Arena earned the Steam a 4-2 series win and the right to play the Osoyoos Coyotes in the division final beginning on Saturday. 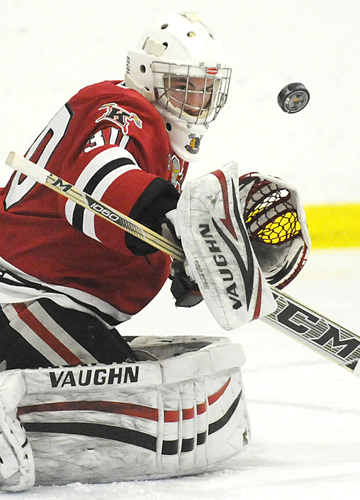 Goals by Michael McEachern and Kelowna Minor Hockey Association product, Braden Eliuk, in the second period proved more than the Steam would need to end the Chiefs’ season on their home ice. Jack Mills closed out the scoring with an empty-net goal with 2:29 remaining.

Held to just nine shots in the first two periods, the Chiefs did put on a serious push in the third period, outshooting the visitors 16-5, but as was the case for much of the season, the Kelowna squad had its trouble finishing and couldn’t beat winning goaltender Matthew Kostiw.

The series clincher came a night after the Steam had taken the best-of-seven series lead with a 4-3 overtime victory over the Chiefs in Summerland.

In the regular season, Summerland won six of eight games between the two teams, with the Steam outscoring the Chiefs 31-14.

The Steam now have the formidable task of attempting to upset an Osoyoos team that finished the regular season with 84 points and defeated Summerland in seven of eight meetings. The Coyotes outscored the Steam 37-14.