(UPDATE: Jan. 17 @ 8 am): A new round of weather alerts have been issued by Environment Canada as parts of British Columbia brace for more snow, cold and wind.

The alerts cover the west coast of the province, almost all of Vancouver Island and the Fraser Valley.

Metro Vancouver could also be affected.

Environment Canada is warning of a possible winter storm hitting Friday night and stretching into Saturday.

Crews get up, way up, to reload the cable collar system on the #PortMannBridge this morning. We’ll be dropping the collars, as needed, to address accumulation on the bridge cables.
How do you know it’s cold? Look at the ice in the river. 🥶 #BCHwy1 #Coquitlam #SurreyBC pic.twitter.com/lLbh5SL2N5

It could bring a mixture of snow, freezing rain and high winds.

“The storm will arrive tonight with heavy snow beginning late this evening across the south coast,” the agency explained.

“There is a chance that this transition could be delayed resulting in higher snowfall amounts. It is also possible this transition will include a period of freezing rain.” 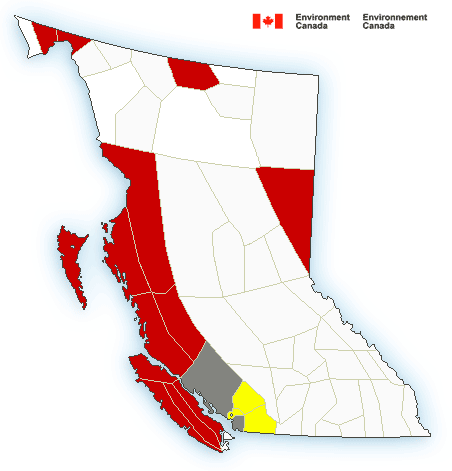 Environment Canada also explained that temperatures around the Fraser Valley, Howe Sound and Whistler will remain just below zero because cold winds coming from the BC Interior.

“Surfaces such as highways, roads, walkways and parking lots may become icy and slippery,” the agency added.

Parts of Vancouver Island, meanwhile, are under snow and wind warnings, while the Peace River area is expected to experience extreme cold.

(Original story: Jan. 15 @ 6: 10 am): Environment Canada has issued weather warnings for much of British Columbia.

Police in Abbotsford have warned drivers not to travel along Hwy 1 in the Fraser Valley due to “extreme whiteout conditions.”

Blizzard, extreme cold, storm or wind warnings are in effect across vast swathes of the province, with the Okanagan one of the few spots not to be affected. 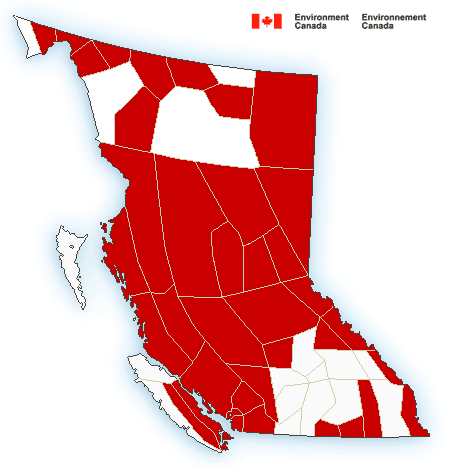 In the Greater Vancouver Area, residents and visitors are being warned about southeast winds of 70–90 km/h and snowfall of between 10 and 15 cm.

Vancouver Island, the Southern Gulf Islands and the Sunshine Coast are all under the same warning.

“Winds will shift abruptly to the southwest late overnight or Thursday morning in the wake of the low with gusty winds,” Environment Canada explained.

EXTREME WHITE OUT CONDITIONS ON HWY 1. Please stay off the highway through Abbotsford to Chilliwack. Emergency crews are having a difficult time reaching stranded motorists. The roads are treacherous. Please stay home.

“Damage to buildings, such as to roof shingles and windows, may occur. High winds may toss loose objects or cause tree branches to break.

“Be prepared to adjust your driving with changing road conditions due to high winds.”

In much of the province’s north, meanwhile, extreme cold warnings are in effect.