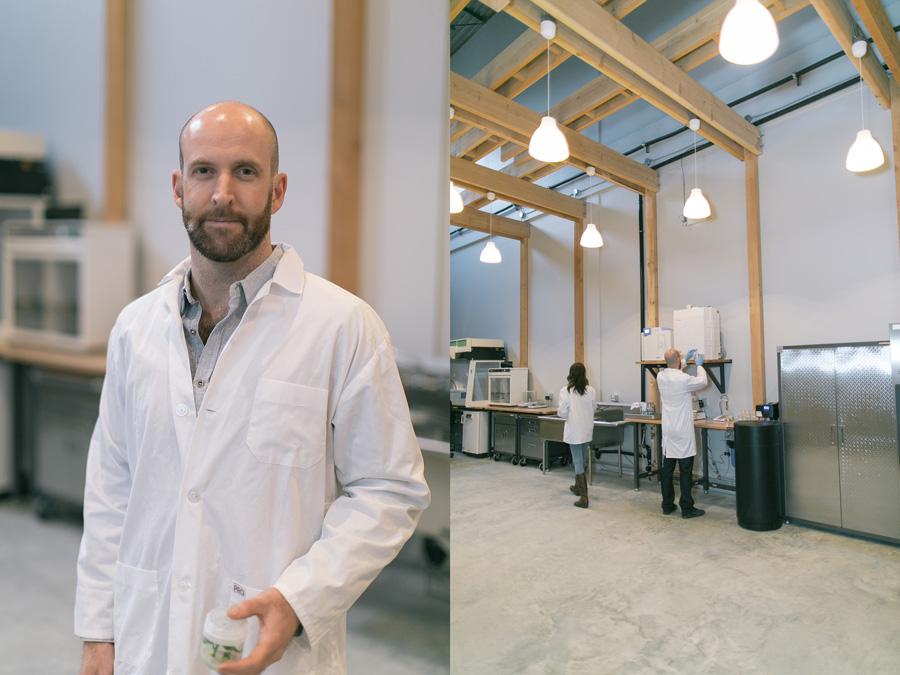 In a nondescript warehouse in Penticton, shiny new lab equipment rests on modular workbenches purchased from the Canadian Tire down the street. The look is minimalist and functional, with drop lights hung from a wooden pergola that seems somewhat out of place in a warehouse; it's the kind of thing you'd expect to be providing shade on a winery patio, not in the middle of a warehouse obscuring the high ceiling.

The room is vaguely nostalgic if you've taken chemistry in high school: autoclaves and fume hoods, freezers and glasswear, and the expected latex gloves and white coats. There's nothing old-fashioned about the work though; Geoff White is at the forefront of commercial plant biotechnology, and the work he's doing is unlike anything else out there.

As the man behind ProgenyBio, the pride White has in his new lab is apparent. He's quick to point out the small details as he tells the story of how he found himself at the cutting edge of a market set to explode.

White came to the Okanagan in the early 2000s to do his PhD work at the Summerland Research Station. He went on to work with farmers and vintners in the area, first with a private agricultural firm and later striking out on his own to start ProgenyBio.

Initially the company focused on agricultural consulting, but White soon began focusing on molecular virus testing for wineries. The BC wine industry has a reported annual economic impact of over $2 billion and, through working with various wineries in the Okanagan, White became alarmed at the increasing vulnerability to viruses. "It became apparent to me very early that despite a few forward-thinking producers, the industry as a whole doesn't fully appreciate the risk viruses pose." White continues to offer those services for his clients, but he's turning his attention and talents to the burgeoning medical marijuana industry. 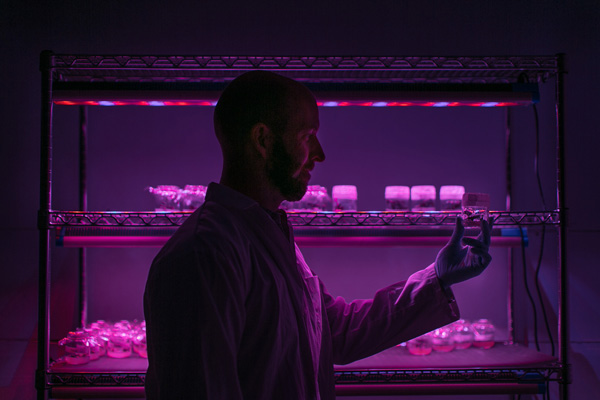 The Government of Canada first established regulations in July 2001 to allow access to cannabis for medical purposes, yet the industry is still in its infancy. The Health Canada website currently lists ten licensed producers in Canada, with further licenses expected to be issued within the next 18 months. Prescription users of marijuana in Canada are expected to grow from the current 40,000 to nearly half million within that same period, representing an industry with a massive economic impact. Estimates of the potential size of this market differ depending on the source of the study created, but the tax revenue could reach up to $7.5 billion annually.

The projected growth of this market is in large part due to new government legislation set to take effect soon. Since the initial regulations were enacted, Canadians with licenses to possess cannabis for medicinal purposes have been allowed to grow marijuana for their own personal use. After April 1st, 2014, prescription holders will be required to purchase their marijuana from sellers licensed by Health Canada and no longer permitted to grow their own.

The combination of consumer demand and new legislation has created a gold rush of sorts as commercial-sized businesses rush to set up shop.

Most producers of medical marijuana follow the same business model: specific strains are cultivated and tested, and those strains with the most desired traits are cloned and small plants are grown from cuttings. The small plants are then brought to flowering, harvested and then distributed. The total growth cycle is approximately 4 months, with the bulk of that time taken up in the genetics and vegetative stages.

ProgenyBio's niche is in the initial stages of this process, acting more like a genetics supply company than as a producer itself. White has developed a proprietary method of cultivating the plants and preparing them for growing in a fraction of the time it normally takes. Through a partnership with The Herbal Clone Bank (THC Bank) licensed producers will be provided with uniform, purebred cultivars at the exact same growth stage. By removing the genetics and vegetative component from the growth cycle, licensed producers can improve their competitive advantage by focusing solely on the flowering, harvesting and distributing, which significantly reduces overhead and increases the number of harvests they can produce.

"Ultimately, this reduces the risk for the licensed producers," says White. "The potential for profit has brought in a lot of companies that are unprepared and under-qualified to produce marijuana on such a large scale. Shoddy workmanship and inefficiencies are guaranteed as production increases."

Producers are quick to recognize that the benefits ProgenyBio and THC Bank can bring to the industry. "Every conversation I have with producers ends with them asking 'When can we start?'" laughs White. "The demand is absolutely there."

ProgenyBio has been a part of the Venture Acceleration Program at Accelerate Okanagan since the company's inception in 2012, and White is quick to credit the program and its Executives in Residence (EiRs) for helping him grow as quickly as he has. "The Venture Acceleration Program has been a great resource for a scientist who had no real business experience, giving me the tools to validate my ideas." he says. "I found that leveraging the experience of the EiRs was fantastic, and allowed me to realize that these ideas actually had potential. Their experience and encouragement convinced me to pursue them."

Pursuing those dreams is what led White to open this new lab, and he's already begun hiring assistants to keep up with demand. Although he's just moved in, White already has eyes on expanding as he finds himself at the forefront of this industry. "I initially thought that adding medical marijuana to my tissue culture services would be a good business move, but it's obvious it's much bigger than I'd anticipated. This industry is still in its infancy, and right now there's very little competition for what I can provide."

Progeny Bio is a VAP Client, and a past participant in the Jump:Start:Challenge.