With overdose deaths rising across Canada, advocates for drug users are calling for the implementation of a national safe supply program as part of an effort to save lives.

Failing to do so, they say, will lead to more deaths from overdoses across the country.

A public health emergency was declared in 2016, a year that saw 991 deaths. More than 1,500 people have died in British Columbia from illicit drug overdoses in 2020.

Ontario’s chief coroner’s office estimates 50 to 80 people per week are dying of overdoses. 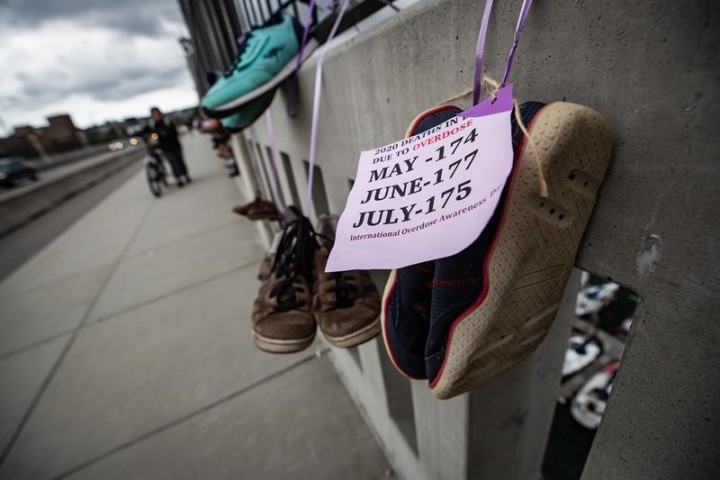 Karen Ward, a drug policy and poverty reduction consultant with the City of Vancouver, said the concept of the program needs to be expanded across the country.

“It’s like you’re struggling to tread water in a tsunami,” she said in an interview, referring to the number of overdoses in BC.

Experts say COVID-19 has exacerbated the situation as the supply of illicit drugs became more toxic when the border was closed and more drugs were made or altered in Canada. The pandemic has also impeded access to key harm reduction services, such as supervised consumption sites.

The federal government issued data on Wednesday showing 17,602 people have died from opioid overdoses between January 2016 and June 2020.

Between January and June of this year, 86% of all opioid overdose deaths occurred in British Columbia, Alberta or Ontario.

“It will get worse. It will, definitely. Unless we stop talking and do some very specific things,” said Ward. “Let’s do safe supply. Nothing is perfect, but let’s find ways to prescribe in your community, in your area, right away. Or it will get worse.”

Along with a national safe supply program, Ward argues decriminalization is something governments should be considering.

It would mean police wouldn’t charge someone caught with a small amount of drugs and they would not seize the substance.

She is also critical of the scope of BC’s safe supply program, arguing health professionals need to be more willing to prescribe pharmaceutical alternatives.

“We need a variety of ways to access the health benefits that we have decided are necessary,” Ward said.

The federal government announced $9.5 million in funding for four safe supply pilot projects in Ontario in September, but advocates say that the small size of the project doesn’t do enough.

Federal Health Minister Patty Hajdu was unavailable for an interview, but her office sent a statement saying it is reviewing Vancouver’s proposal.

“The COVID-19 pandemic has worsened the ongoing opioid crisis. We have lost too many Canadians to overdose and all levels of government must redouble our efforts to save lives,” she said in the statement.

Prime Minister Justin Trudeau said in September that he supported safe supply but maintained his stance against drug decriminalization.

Dr. Mark Tyndall, a professor at the school of population and public health at the University of British Columbia, said more support is needed for safe supply programs and decriminalization efforts.

“Safe supply, to me, is the only real practical thing to do,” he said in an interview.

It’s frustrating to see governments and public health agencies not put as much effort as they could into saving the lives of drug users, said Tyndall, who used to head BC’s Centre for Disease Control and worked to launch an opioid vending machine in Vancouver’s Downtown Eastside.

“I’m pretty pessimistic,” he said on what the next year holds for drug users. “The chance of you overdosing from street drugs are probably higher than they were five years ago … we haven’t really made any significant changes that have made people safer.”

Zoe Dodd, a co-organizer with the Toronto Overdose Prevention Society, said governments need to understand the wider impact that overdoses are having.

“If we don’t seriously address the overdose crisis, we will lose a workforce,” she said.

Along with safe supply and decriminalization, more support is needed for people who work and volunteer at overdose prevention sites.