Since Monday, the out of control blaze has grown from just over 100,000 hectares to the latest estimate of 230,000 hectares. 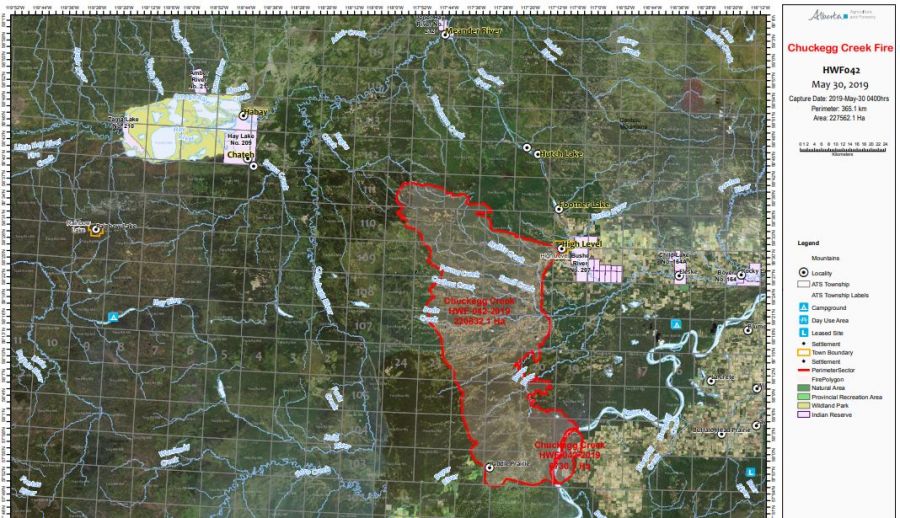 There's a second out of control fire, the Steen River wildfire, in the area as well, which was last measured at 17,419 hectares.

To battle these two fires, there are 142 wildland firefighters, 23 helicopters, one airtanker and eight pieces of heavy equipment assigned to the area. 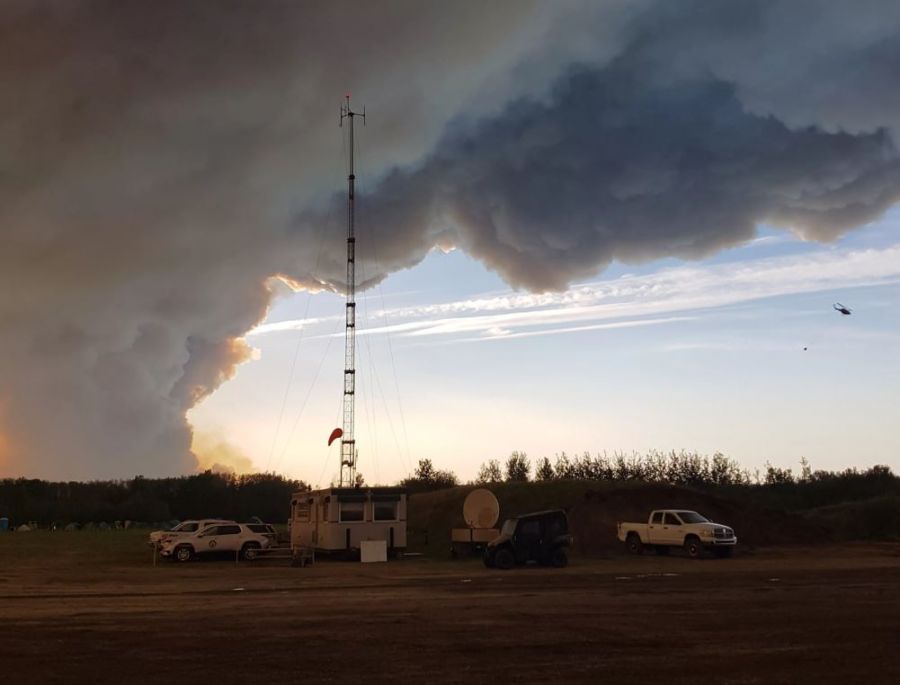 "Continued hot and dry conditions along with variable, gusty winds have proved a challenge to firefighting efforts and safety," says the latest update from Alberta Wildfire.

Crews continue to perform controlled burns in an attempt to control the fire's perimeter and are hoping that cooler, calmer conditions can help them get head.

(UPDATE: May 27 @ 7:30 a.m.) - The winds had been favourable for crews battling the Chuckegg Creek wildfire is northern Alberta, but that started to change on Sunday.

Scott Elliot, Alberta Wildfire incident commander, said the wind shifted and is now coming out of the south, which means "smoke will start drifting towards town." 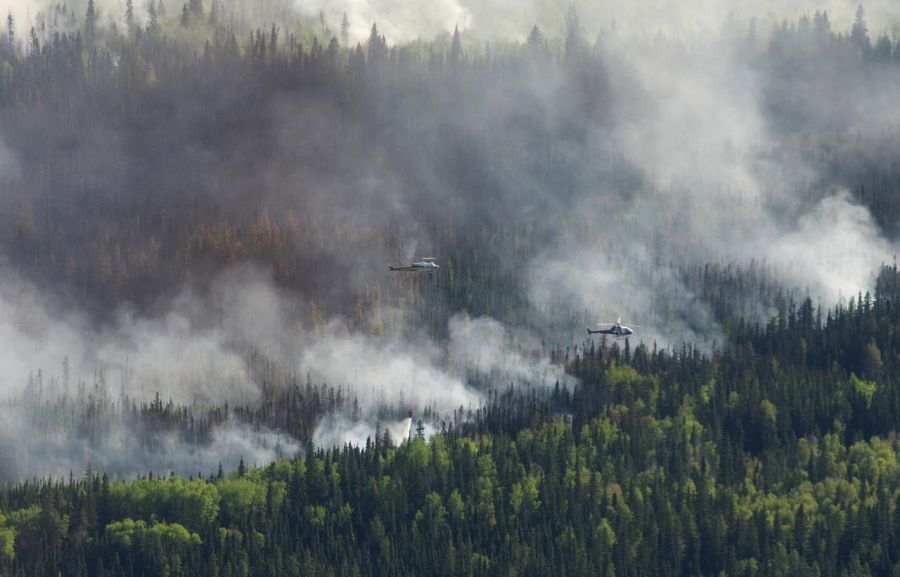 Officials, however, remain confident that the work they've done in recent days will keep the flames away from High Level.

"We’ve done many of the things we need to do in order to make sure the community is going to be safe from wildfire," said Elliot.

"The biggest thing for us is the conditions have continued to get worse. So until we get rain, the fire behavior situation continues to be in the extreme ... That threat still exists."

The fire is now over 100,000 hectares and around 5,000 High Level residents are still under evacuation order.

Officials have said the evacuees shouldn't expect to return before sometime later this week, but provincial emergency funds for gas, food and other expenses should be available starting today.

The blaze is spreading away from the Town of High Level as it approaches 100,000 hectares in size.

Alberta Wildfire incident commander Scott Elliot down warn that the forecast calls for a shift in winds early next week that could push the fire back towards High Level.

As a result, around 5,000 High Level residents remain evacuated.

A post shared by Michael Edward Merriam (@michael.merriam_photography) on May 24, 2019 at 1:12pm PDT

(UPDATE: May 23 @ 7:30 a.m.) - A controlled burn has been carried out south and west of High Level and protect the community from the nearby Chuckegg Creek Fire.

The 92,000-hectare wildfire remains about three kilometres southwest of the town and an evacuation order is still in place for around 5,000 residents.

Although the controlled burn was considered successful, Mayor Crystal McAteer stressed on Wednesday that the town is still at the mercy of the weather.

"I want to stress the importance to everyone, especially evacuees, that the danger has not passed nor has it diminished," McAteer said.

"We know based on recent experiences of Slave Lake and of Fort McMurray that wildfires are highly unpredictable and can change at any moment."

According to Alberta Wildfire, rising temperatures, a gusting wind and no significant rain have pushed the wildfire danger in the area into the extreme range.

The goal is to perform more of these controlled burn operations when conditions allow.

(UPDATE: May 21 @ 2:05 p.m.) - Alberta has made a request for assistance as the province continues to deal with multiple large wildfire.

That includes a nearly 80,000-hectare blaze in northern Alberta that forced the evacuation of the Town of High Level and the nearby Bushe River Reserve.

They'll be deployed on Wednesday and Thursday to various areas depending on where they're needed.

All associated costs regarding this assistance will be paid for by Alberta.

The #BCWildfire Service will be supplying @AlbertaWildfire with 267 BCWS personnel to assist with its increasing wildfire threat. To all those responding to wildfires in Alberta, we wish you safety and success! More info: https://t.co/lSFIgNC2pL

(UPDATE: 8:50 a.m.) - Crews fighting to protect the town of High Level, Alta. from an encroaching wildfire are getting help from favourable winds.

The winds have started to push the fire, which was last measured at 69,000 hectares, away from the town and the nearby Bushe River Reserve.

Both communities were evacuated as the blaze got to within three kilometres of High Level, but Alberta Premier Jason Kenney says the fire is now about five kilometres away.

Winds are forecasted to be out of the southeast for the next several days, which will continue to push the fire away from homes and other buildings.

HIGH LEVEL EVACUATION UPDATE #1 (9:15 P.M.) -- The High Level evacuees are starting to arrive. The reception center in Slave Lake is at the Legacy. It will be open 24 hours. The phone number for reception is 780 843 5651. Vouchers are available for hotels. #slavelake #slavelakeab pic.twitter.com/jjLTqdyd2h

(Original story: 6:35 a.m.) - Thousands of people are being told to leave High Level, Alta. as a wildfire makes its way towards the town.

The Chuckegg Creek wildfire grew from around 25,000 hectares on Sunday to 69,000 on Monday and was just three kilometres from High Level when evacuation orders were given.

People living on the nearby Bushe River Reserve have also been told to pack up and leave.

"The winds are pushing the smoke away from the Town of High Level,” said Mayor Crystal McAteer.

“It looks very scary on the horizon, but in the Town of High Level the skies are blue and sunny and windy.”

In total, around 4,000 people from High Level and 750 from Bushe River are affected by the evacuation order.

McAteer says people should expect to be away for 72 hours.

Residents are being told to leave town via Hwy 58, since highways south and west of the communities have both been closed due to the fire. 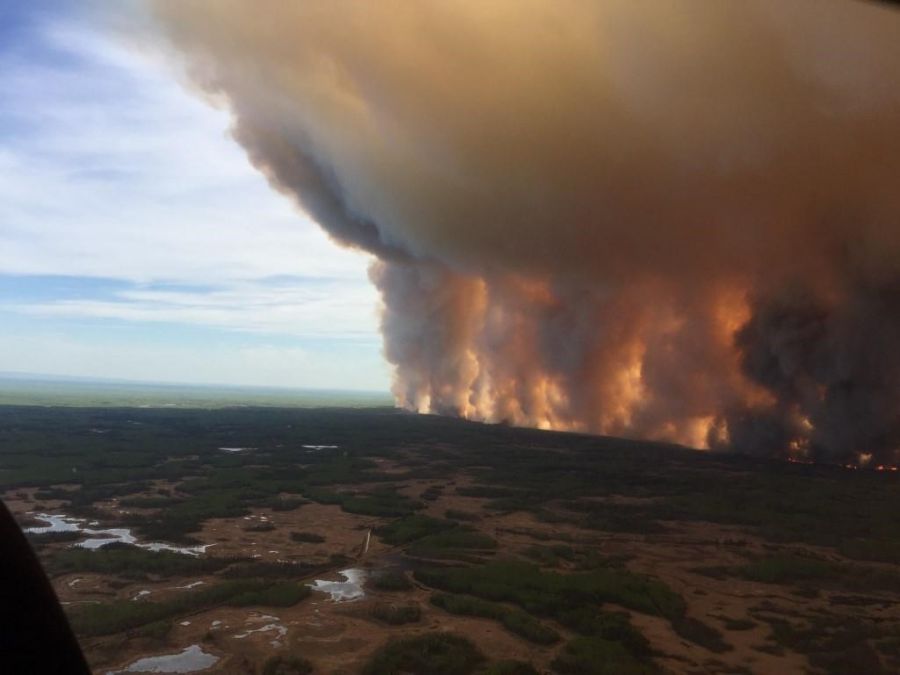 Scott Elliot, an incident commander with Alberta Wildfire, did have some good news on Monday, saying that the fire had shifted away from High Level.

However, city officials decided it was best for everyone to leave since the flames were so close and these fires are unpredictable in nature.

"If there was a subtle shift in the wind direction, that would increase the likelihood of rapid fire spread towards the community," Elliot said.

A reception centre has been set up for evacuees in Slave Lake, Alta., which is just under five hours away by car.