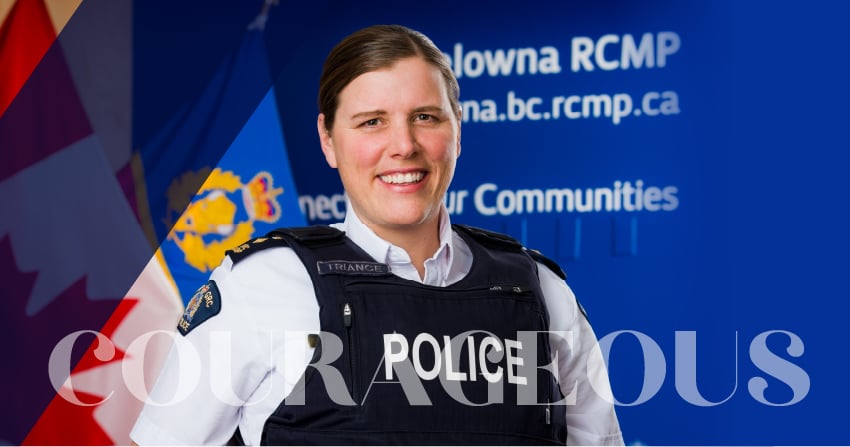 Superintendent Kara Triance is the first female Officer in Charge at the Kelowna RCMP Detachment—the third largest RCMP Detachment in Canada that serves a number of cities and townships on unceded Sylix Okanagan territory—and she’ll be the first to admit that her journey to that title wasn’t without challenges.

“There were absolutely challenges that I had to deal with building my career as a woman in the RCMP,” she says. “I’m a mom of two, and having young children made the demands of my job challenging at times. We moved around the province every few years so I could take on promotions, which meant my husband had to make career sacrifices. I’m very grateful that he was so supportive of my goals.”

That said, Kara says the challenges associated with the job are nothing compared to the joy it brings her. “Policing is a very interesting job and it brings immense satisfaction and unique opportunities, particularly as a Mountie where we have the privilege of working throughout Canada in a wide variety of roles,” she says.

Across all communities that she’s served in, Kara has strived to establish relationships and work in partnership with agencies and individuals, to drive forward effective change and have a positive impact.

Kara is a tireless advocate for improving access to leadership positions for women in law enforcement and beyond. She is involved in BC Women in Law Enforcement as an Executive Advisor, an association dedicated to strengthening, uniting and promoting women in BC law enforcement.

The work of improving diversity within the RCMP, says Kara, is crucial to elevating the quality of services the RCMP provides.

“Only about 33% of the officers in the Kelowna Detachment are women,” says Kara. “While that’s actually relatively high compared to some police agencies in BC, I’d like to see the number closer to 50%. Inclusive leadership broadens our perceptions of what makes a good leader. Women in positions of leadership will influence decision-making around policy, laws, and management practices.”

While feminist activism plays a large role in Kara’s life today, she wasn’t always so acutely aware of patriarchal systems and the ways they hinder societal progress.

“Earlier in my career, I never really thought about the fact that I was one of few women in the RCMP,” she admits. “What actually empowered me to look at the world from a feminist perspective was becoming a parent of two daughters. I want to remove the barriers I had overcome to make their journeys a little easier.”

Kara knows that making change—especially as a woman in a male-dominated field—can be exhausting. But she believes that everyone has a part to play in creating a more equitable world.

This article was originally published in the inaugural edition of I Am Woman, a magazine celebrating female leadership in the Okanagan. Read more stories of exceptional local women.