(UPDATE: Oct. 21 @ 10:40 pm) - In a situation eerily similar to the one that played out in the United States three years ago, Canada's electoral system will surely be questioned after the results of tonight's federal election.

Justin Trudeau and the Liberals won a minority government, earning 156 of a total 338 seats. 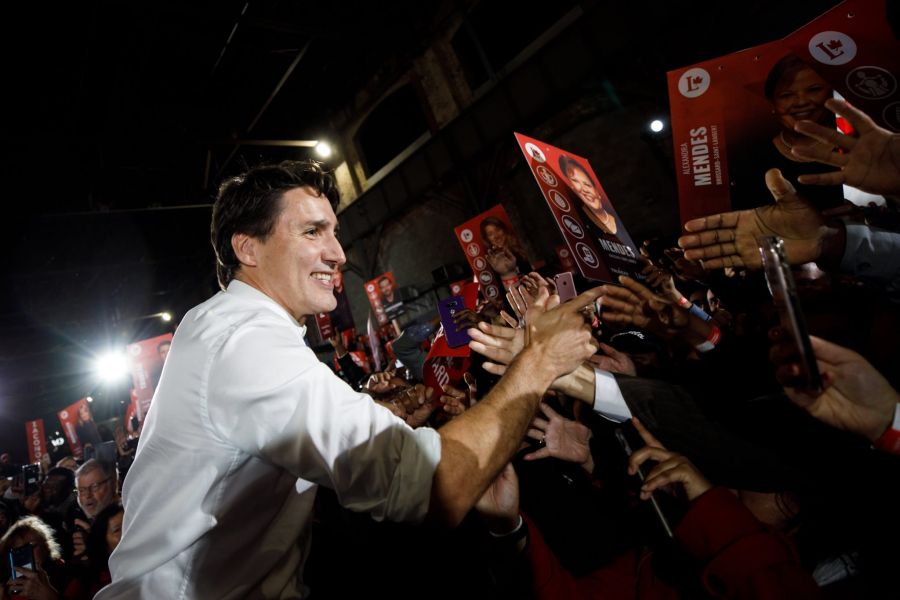 Andrew Scheer's Conservatives, however, had more total votes, as his party had over 250,000 more than Trudeau's Liberals with just a few polling stations still to report.

Meanwhile, the Liberals dropped 21 seats and the NDP surprisingly fell from 39 seats to 24.

The Green Party won three seats, which included their usual two on Vancouver Island and a historic win in Atlantic Canada's Fredericton riding.

In Quebec, the Bloc Québécois dominated the province, picking up 32 seats.

The final seat in Canada was won by Jody-Wilson Raybould, the former Liberal who was ousted from the caucus by Trudeau in April and ran in this election as an Independent.

Liberal Leader Justin Trudeau says the re−elected Liberal government will always put the country and its people at the heart of every decision.

Speaking to supporters in Montreal, Trudeau says Canadians voted for a progressive agenda and strong action on climate change, and is promising to deliver on that. 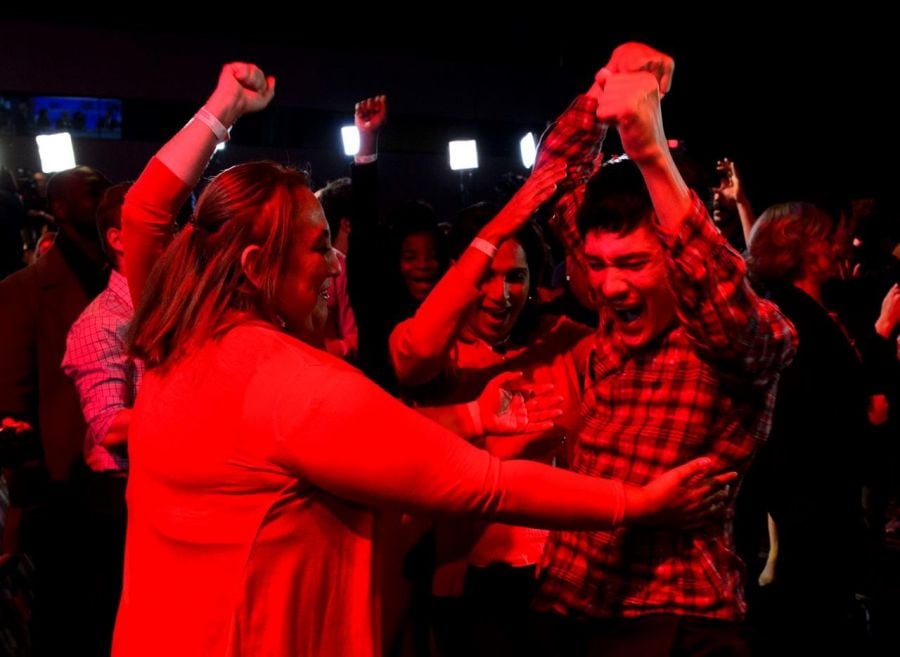 He also delivers a message to voters who didn’t back the Liberals, promising to govern on behalf of all Canadians, including Albertans — who didn’t elect a single Liberal MP.

Scheer tells supporters that the strength of Canada’s democracy is not only measured by the ballots Canadians cast, but also how the country moves forward after they are counted.

But he says the election results show Conservatives have put Trudeau on notice that the Tories are ready to govern when the Liberal government falls.

NDP Leader Jagmeet Singh is vowing his party will play a constructive role in the new Parliament that Canadians have chosen, saying he delivered the message to Liberal Leader Justin Trudeau in a phone call tonight.

In a speech that touches on many of the issues and promises he raised during the 40−day campaign, Singh also talks about Grassy Narrows First Nations as an example of the work the federal government still must do on Indigenous issues.

Singh is projected to be re−elected in Burnaby South, with his party leading or elected in 24 seats, which would be a decline from the 39 seats the party held when Parliament was dissolved for the election campaign.

The electoral map is now coming into closer focus with a Conservative sweep of Saskatchewan, including leader Andrew Scheer’s re−election, and a near sweep in Alberta as part of the 121 ridings they are leading in or have been elected.

The Liberals are leading or have captured 157 seats nationwide, many of them in Ontario, Quebec and in Atlantic Canada.

In B.C., Liberal Terry Beech is projected to hold his Vancouver−area riding of Burnaby North−Seymour where the government’s purchase and support of the Trans Mountain pipeline project was controversial.

The Greens will have three seats in the House of Commons, as Paul Manly is projected to keep his B.C. seat in Nanaimo−Ladysmith.

People’s Party of Canada Leader Maxime Bernier is projected to lose his seat in Beauce, the only one his upstart party had going into the election.

Bernier had hadily won the riding in 2015 and had held the seat since 2006, but split from the Conservatives after losing the party leadership to Andrew Scheer.

Liberal Leader Justin Trudeau, on the other hand, is going back to House of Commons after handily winning his home riding of Papineau.

The Canadian Press projects that Adam van Koeverden will be elected in the Ontario riding of Milton, defeating longtime Conservative MP Lisa Raitt.

Meanwhile, in Burnaby, B.C., the mood is sombre among supporters entering the ballroom at NDP Leader Jagmeet Singh’s election night party, where campaign staffers — hoping for a bigger breakthrough — are anxiously looking at TV screens and their smartphones.

(UPDATE: Oct. 21 @ 7:30 pm) - The Canadian Press is projecting that the Liberal party will win the most seats in the 2019 federal election, giving them the best chance to form the next government.

Whether Liberal Leader Justin Trudeau wins a majority, however — or can reach an arrangement with another party to sustain a minority government — is yet to be determined.

The Liberals left Atlantic Canada with a commanding lead, down just a few seat from their sweep in the region in 2015, and the gains Conservatives made as more westerly votes were counted were not enough to make up the difference.

The New Democrats have been reduced to a rump in Quebec thanks to a resurgent Bloc Quebecois taking back numerous seats from the NDP.

With ballots yet to be counted in many British Columbia ridings, expected to be the Green party’s likeliest territory for pickups, the Greens are still enjoying a commanding lead in the New Brunswick riding of Fredericton.

(Original story: Oct. 21 @ 4:45 pm) - The polls have closed in Atlantic Canada, signalling the start of what promises to be a long night to determine whether Justin Trudeau’s Liberals will get a second mandate to govern Canada.

Early results had the Liberals leading in six of the seven ridings in Newfoundland and Labrador, where polls closed half an hour before they did in the rest of the region. The seventh — St. John’s East, thought to be the seat in the province where the Liberal incumbent was most vulnerable — had not yet reported any results.

In 2015, the Liberals swept all 32 seats in Atlantic Canada, a feat they’re not expected to repeat tonight. But they can’t afford to sustain many losses. 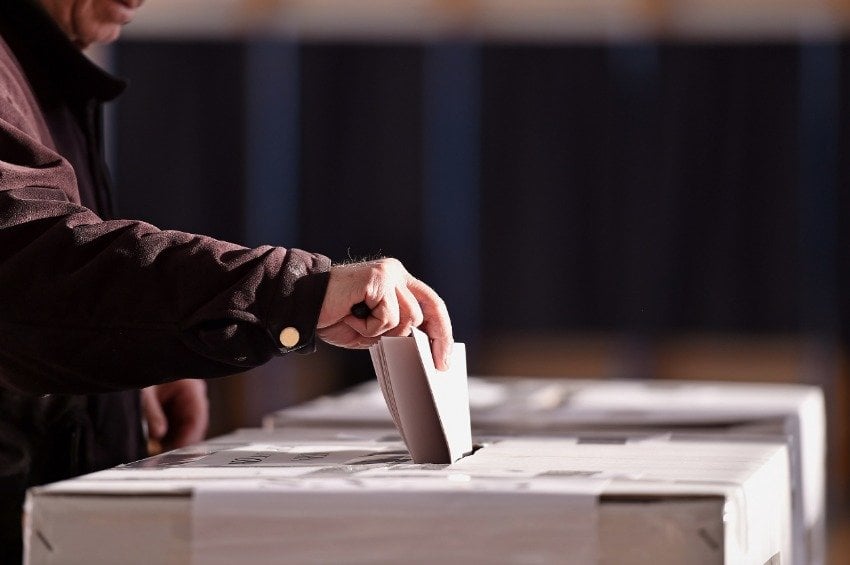 Polls have suggested that the Liberals and Andrew Scheer’s Conservatives finished the 40-day campaign in a dead heat, with neither in position to win a majority of seats in the House of Commons.

The Liberals appeared to have an edge over the Conservatives in Ontario and Quebec, which account for almost 60 per cent of the 338 seats up for grabs.

Still, an unexpected surge in support for the Bloc Quebecois upended the hopes of both the front-running parties for gains in Quebec.

And a bounce for the NDP after Jagmeet Singh’s performance in the leaders’ debates ate into Liberal support in Ontario and British Columbia.

The Green Party, which had hoped for a big breakthrough in this election, appeared to stall mid-campaign but is in a battle with the NDP in B.C.

Maxime Bernier, leader of the fledgling People’s Party of Canada, is fighting to retain his own Quebec seat in Beauce.

Neither Trudeau nor Scheer seemed able to generate much enthusiasm throughout the campaign, which frequently devolved into mudslinging and misrepresentations of one another’s policies and records.

Trudeau, who had barely recovered from months of controversy over the SNC-Lavalin affair last winter and spring, was embarrassed during the opening week of the campaign when it was revealed that he had at least three times in the past dressed up in black- or brownface. The revelation undercut his image as a champion of diversity and inclusion.

He was also plagued with unsubstantiated rumours and fake reports, spread on social media, about his conduct as a teacher at a Vancouver private school.

Scheer was dogged throughout the campaign by questions about his personal beliefs about abortion and same-sex marriage and repeatedly insisted that he would not reopen debate on either issue should he become prime minister. However, doubt remained whether he would allow Conservative backbenchers to initiate legislation to restrict access to abortions.

Conservative hopes in Quebec took a beating after Scheer put in what was widely considered a bad performance in the first French-language leaders’ debate. And in the dying days of the campaign, he was hit with reports that his party had hired an outside consulting firm to conduct a “seek and destroy” campaign against Bernier, Scheer’s one-time leadership rival.

Only 4 new COVID-19 cases announced on Friday, no new deaths