They also named the injured individual in the incident as Captain Richard MacDougall, a Snowbird co-coordinator and the pilot of the aircraft.

"The RCAF has suffered another tragic loss of a dedicated member of the RCAF team. We are deeply saddened and grieve alongside Jenn's family and friends."

The RCAF has suffered another tragic loss of a dedicated member of the RCAF team. We are deeply saddened and grieve alongside Jenn’s family and friends. Our thoughts are also with the loved ones of Captain MacDougall. We hope for a swift recovery from his injuries. - Comd RCAF pic.twitter.com/8U41bdVqcU

The two were involved in the crash during Operation INSPIRATION, a national tour meant to "lift the spirits of Canadians and salute front-line workers during the COVID-19 epidemic," says a defence ministry statement.

"For the past two weeks, the Snowbirds have been flying across the country to lift up Canadians during these difficult times ... their flyovers across the country put a smile on the faces of Canadians everywhere and make us proud," Prime Minister Justin Trudeau said in a statement. 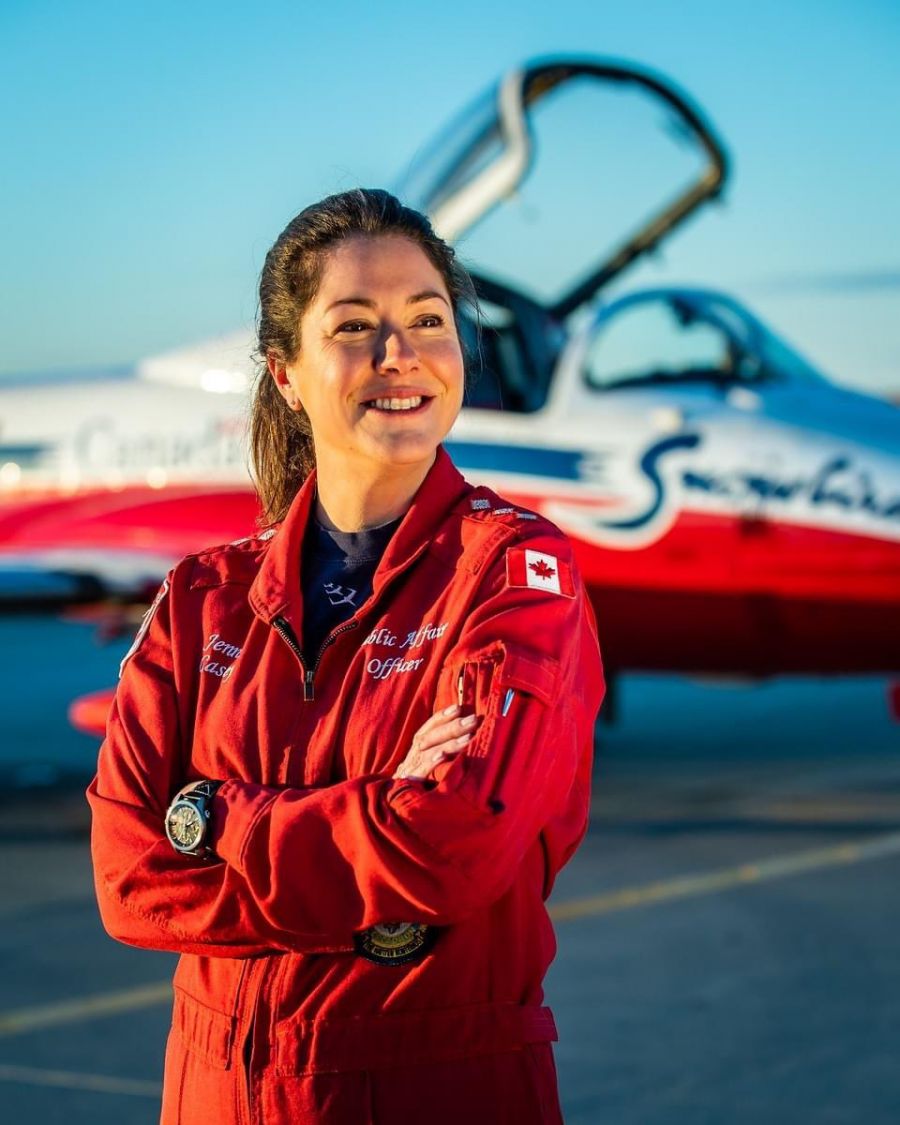 “Sophie and I join all Canadians in offering our heartfelt condolences to the family and loved ones of Captain Jennifer Casey. All Canadians are with you during this difficult time.”

Casey and MacDougall were flying in a Royal Canadian Air Force CT-114 Tutor aircraft when the plane suddenly nosedived and crashed in a Kamloops neighbourhood.

Both the CT-114 Tutor fleet and the Operation INSPIRATION tour have been delayed indefinitely.

An RCAF Flight Safety team is leaving Ottawa "shortly" to investigate the incident and the circumstances that led to the crash.

(UPDATE: May 17 @ 6:26 pm) - The victim in a tragic plane Snowbirds plane crash in Kamloops has been identified by a previous employer.

HalifaxToday, powered by News 95.7, said that Captain Jenn Casey died today in the crash. Casey was a former reporter for the outlet and was a public relations officer for the Canadian Armed Forces.

Sources from Dalhousie University, where Casey studied, have also confirmed the news while offering their condolences. 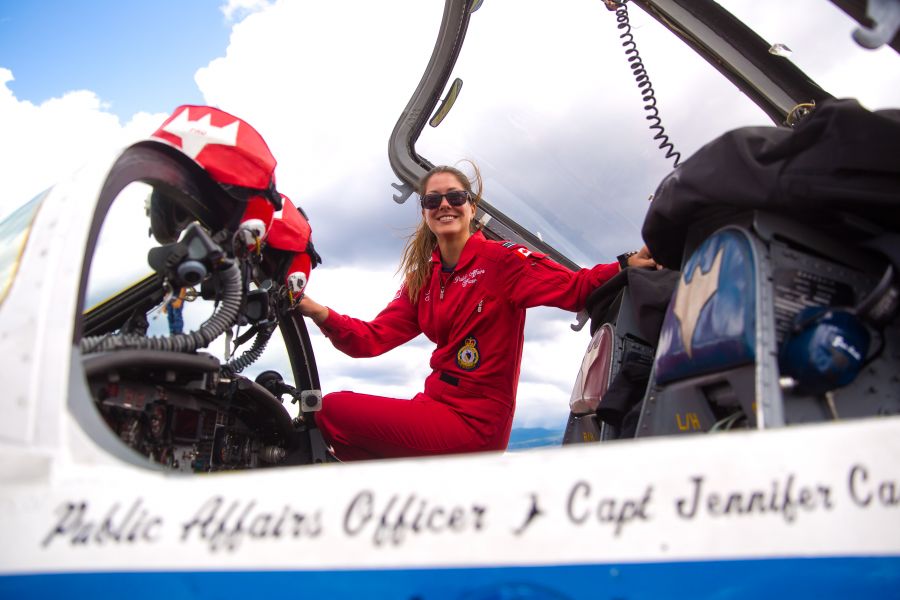 She was originally from Halifax, Nova Scotia. Prior to joining she spent several years working in broadcast radio as a reporter, anchor, and producer in both Halifax, NS and Belleville, ON.

It is heartbreaking to learn about the death of Captain Jenn Casey, @DalhousieU and @ukings graduate, in the crash of @CFSnowbirds in Kamloops, BC. Our sincerest condolences to the family and @CFSnowbirds

Heartbroken to learn of the death of @ukings @kingsjournalism @DalhousieU graduate Capt. Jenn Casey in terrible @CFSnowbirds crash in Kamloops. With gratitude and admiration for her service, we mourn with her family, friends and colleagues.

Officials have confirmed that the crash resulted in one death and one injury. Interior Health says that the injured person, who was also on the plane, was transported to Royal Inland Hospital.

"It is with heavy hearts that we announce that one member of the CF Snowbirds team has died and one has sustained serious injuries. We can confirm that we have contacted all primary family members of those involved. More information will be communicated in the near future," they said in a statement.

It is with heavy hearts that we announce that one member of the CF Snowbirds team has died and one has sustained serious injuries. We can confirm that we have contacted all primary family members of those involved. More information will be communicated in the near future.

In a tweet, the Royal Canadian Air Force stated that while the surviving member of the crash sustained serious injuries, their injuries are not considered life threatening.

Update: Our previous statement indicated that the surviving member of the crash suffered serious injuries, we can confirm that their injuries are not considered life threatening.

No other injuries have been reported, said Kamloops Fire Rescue Platoon Captain Darryl Cooper, including members of the household near which the plane crash occurred.

"When the plane crashed, I believe they were in the house, then they got out of the house," said Cooper.

"They've been put up in emergency social services temporary housing for the night," explained Cooper, who could not specify how many people were in the house.

"It is with a heavy heart that I want to express my most sincere condolences to the Canadian Forces Snowbird organization, at the tragic loss of one of their members, and the serious injuries sustained by another," said Kamloops MLA Cathy McLeod about the incident.

"Our nation was thrilled as they undertook Operation Inspiration with the goal of boosting morale among Canadians as we have all endured COVID-19.

"Today is such a terrible tragedy, my heart goes out to the families, friends and to all our Canadian Forces members. Just as they were there for us, I know that everyone in Kamloops and every Canadian is there for the Snowbird family now."

I would also like to thank the emergency personnel in Kamloops who responded so quickly to this tragic incident.

(UPDATE: May 17 @ 4 pm) - Kamloops resident Marilyn Anderson, located on the 900 block of Schreiner Street, wasn't sure what the impact was about a block away, but she felt it.

"It was extremely loud . . . I don't know what it was but I actually thought the house was shaking," she said, first believing a cherry tree had tumbled in her backyard.

Judy Harestad only lives about four houses down from where the Snowbird crashed on Glenview Avenue. She was on her back porch watching a pair of Snowbirds fly above her. A couple of seconds later, Harestad says, she heard a noise she had difficulty describing.

"It sounded like metal, just exploding kind of. It was a weird sound," she explained.

"You could hear the sound all over the place, my son was out by the airport with his kid watching the planes and they could hear it. It shook our windows, it was really loud."

Shortly after, she went to go investigate what had happened.

"You couldn't really see much because there's too many flames and black smoke."

The Canadian Forces Snowbird crashed into a residence on Glenview Avenue. Police are asking residents to stay away from Glenview Avenue, Crestline Street, Schreiner Street, and Tranquille Road.

At this point, the dynamic situation has made it so RCMP can't confirm any status or injuries. The RCMP will be working with other safety and regulatory agencies to determine the cause of the crash.

(UPDATE: May 17 @ 2:30 pm) - Emergency crews continue to attend to the crash site after a Canadian Forces Snowbird went down in Kamloops this morning.

British Columbia Health Minister Adrian Dix confirmed that one person is in the hospital following the incident. Sunday's crash occurred the same day the Snowbirds were scheduled to make a trip from Kamloops to Kelowna as part of their "Operation Inspiration."

Late this morning @BC_EHS received multiple calls about a plane crash near the Kamloops airport. Paramedics and air ambulances were dispatched and one individual was transported to hospital. Our thoughts are with all affected during this difficult time.

Kenny Hinds, who lives seven doors down from the crash site, explained that it looked like the room of the house where the crash occurred was on fire.

“I just started running down the street. And I got there maybe a minute after it crashed and there were a couple of residents that had their hoses out and they were trying to put the flames out because it hit a house,” he said. “It looked like most of it landed in the front yard, but maybe a wing or something went through the roof perhaps.”

“So there was a bunch of people running around trying to see if we could get into the house to see if anybody’s OK.”

First responders arrived on scene just five minutes after the crash. A total of 14 Kamloops Fire Rescue personnel and five apparatuses were on site.

Marni Capostinsky, another resident in the area, said she was out on the deck when she heard the plane getting closer.

"We ran out under the cover to look and saw something black coming towards us, everyone hit the deck it was so loud,” she said.

She said her son immediately ran out with a hose and neighbours tried to help before first responders arrived.

"It was really scary but good to see everyone trying to come together."

This is the second time a Snowbird has crashed in less than a year.

(UPDATE: May 17 @ 1:20 pm) - Upwards of 10 police vehicles and a pair of ambulances are on the scene where a Canadian Forces Snowbird aircraft crashed earlier today.

Police have blocked off the 900 block of Schreiner Street to traffic while they tend to the situation. 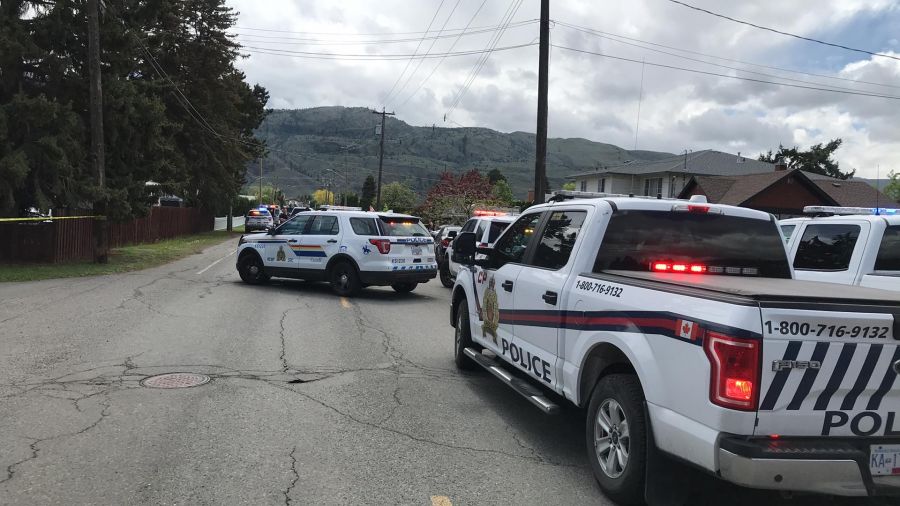 "Our priority at this time is determining the status of our personnel and supporting emergency personnel," said a tweet from the Royal Canadian Air Force. "When appropriate, more information will be made available."

The #RCAF has been made aware that a Canadian Forces Snowbirds aircraft crashed in the vicinity of Kamloops, BC. Our priority at this time is determining the status of our personnel and supporting emergency personnel. When appropriate, more information will be made available.

A Canadian Forces Snowbirds aircraft has crashed in the vicinity of Kamloops, BC. Our priority at this time is determining the status of our personnel and supporting emergency personnel. When appropriate, more information will be made available.

It appears in multiple videos of the plane crash that there were two people on board the plane when it went down and witnesses on scene have confirmed that.

When more information is made available regarding their status, NowMedia will provide that update.

(UPDATE: May 17 @ 12:20 pm): NowMedia has discovered video of the plane crash that took place in Brocklehurst sometime after 11 am.

The aircraft takes a nosedive when the pilot elects to eject.

NowMedia is headed to the scene. More to come.

(Original Story: May 17 @ 12:05 pm): Emergency crews are responding to Brocklehurst after a fiery incident this afternoon.

Unconfirmed reports say a Canadian Forces Snowbird plane crashed into a building near the neighbourhood.

Witnesses said the pilot was able to eject before the crash.

At this point, the cause of the incident and if there are any injuries are unknown.