(UPDATE: July 13 @ 11:20 am) - The RCMP has confirmed that four people are dead and another is presumed dead following Monday's crane collapse in downtown Kelowna.

Insp. Adam MacIntosh said that three workers from the site died at the scene, while another succumbed to his injuries in hospital.

The fifth person, who is presumed dead at this point, was working in a nearby office building when the crane collapsed.

Unfortunately, the body remains buried in the rubble, as the site is not safe enough for a recovery at this time.

"We anticipate, with the assistance of the engineers, we may be able to recover this individual as early as this afternoon," explained MacIntosh.

"Until such time as we’re able to secure that area, safely recover this individual's remains, that area will remain under a local emergency order preventing anyone from going in that area."

Once the area is secured, people will be allowed back in to return home or get their vehicles, but a local emergency order will prevent anyone from accessing the area until then.

MacIntosh also confirmed today that one person was sent to hospital with non-life-threatening injuries as a result of this accident, but they have since been released. 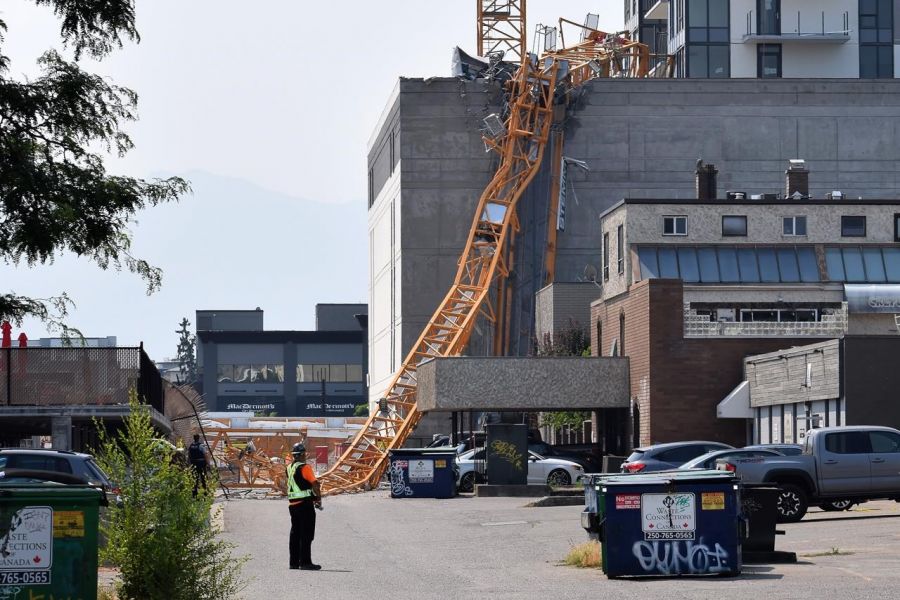 The crew was beginning the process of dismantling the crane when the tragic accident happened at 10:54 am on Monday.

There are no details beyond that about what caused the collapse and the WorkSafeBC investigation will aim to uncover what went wrong.

No official confirmation has been given regarding the crane company involved in this accident, but the Stemmer Construction website lists the Brooklyn Block tower as one of its current projects.

Brothers Patrick and Eric Stemmer have been identified through a GoFundMe as two of the crane operators who were killed in the collapse.

(UPDATE: July 12 @ 5:50 pm) - This evening CEO of the Mission Group, Jon Friesen, provided an update on the crane incident that happened on their Brooklyn construction site today.

"Crews at our Brooklyn site in downtown Kelowna were dismantling our tower frame, and there was a terrible accident that resulted in the collapse of the boom section of the crane, that fell all the way to the ground," said Jon Friesen.

"The RCMP have confirmed that multiple lives were lost, and that is a tragedy that we should keep in mind," said Frisen.

No confirmation could be made about the amount of people who passed away on site, but as RCMP reported more than one individual has lost their life.

The Mission Group has confirmed that the crane was contracted and belonged to another company, but would not disclose a name as police are still working to speak with next of kin.

An investigation is still on-going as to what happened in the dismantling process. "It's just far too early to point any fingers at all, like I said before, right now it's about the injured and the deceased," said Frisen. 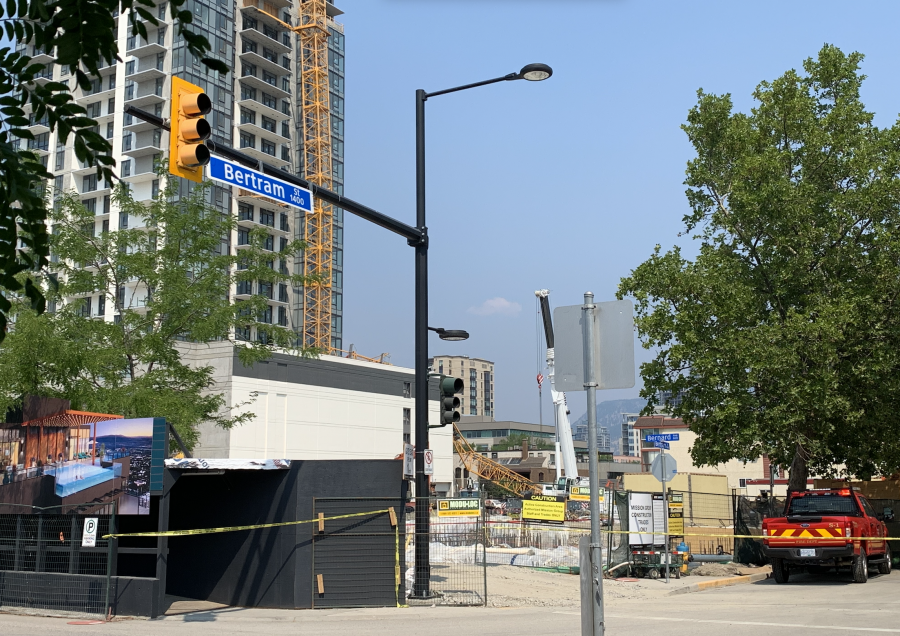 Mission Group has put in place grief counselling for anyone who has been affected by the incident, and there has been ongoing communication with all staff who are currently in a state of shock. As far as other expenses such as hospital bills and funeral services, nothing has been discussed.

"The deceased individuals were working on the site, and I can confirm that they were not Mission Group employees. That does not change the fact that people died today. It doesn't matter whose employees they were, they were on our site and as a result of their work they did lose their lives," said Frisen.

None of the workers on site were unionized.

"Our whole team, the Mission Group staff, and all of our sub trades are in a state of shock. It's not common to see this kind of thing happen on any job site. The characterization could be nothing short of absolutely tragic." said Frisen.

Minister of Labour, Harry Bains, spoke on the tragedy that happened on the construction site. “All workers have the right to a safe and healthy workplace – even one injury or death is too many. This is a heartbreaking reminder that we must strive to ensure the safety of all workers to prevent incidents like this from happening," sais Bains.

NowMedia will provide updates as they are made available.

RCMP Insp. Adam MacIntosh confirmed the reports at an afternoon media briefing and added that one person was still unaccounted for as well.

The missing person is not from the work crew that was on site today, but MacIntosh was unable to provide any further details. 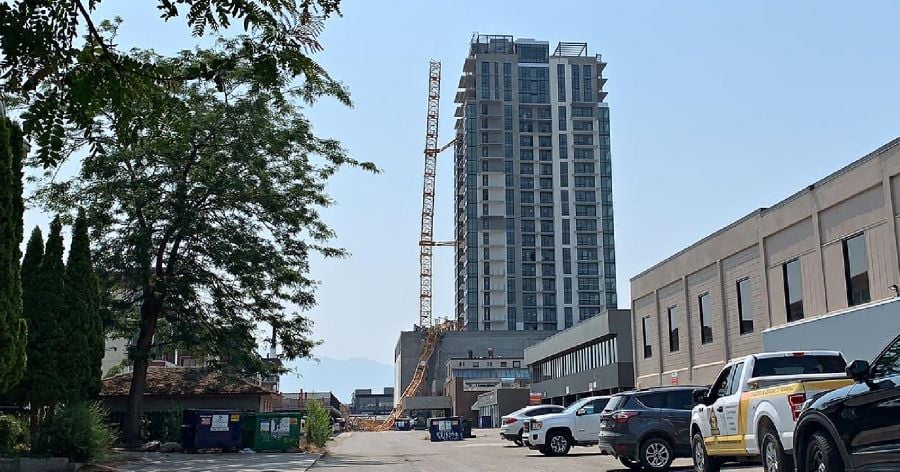 MacIntosh said the area remains "unstable and unsafe," and the RCMP continues to work closely with WorkSafeBC and the Kelowna Fire Department to secure the area with the BC Coroners Service.

A structural engineer has been brought in to assist with the evaluation of the site and to determine the appropriate steps needed to secure that area to make it safe.

An evacuation order remains in place for many downtown residences and businesses, with an Emergency Support Services centre available at the Salvation Army at 1480 Sutherland Ave.

The City of Kelowna has declared a local state of emergency and the following properties are under evacuation order:

(UPDATE: July 12 @ 2:10 pm) - An Emergency Support Services centre has been set up at the Salvation Army on Sutherland Avenue for anyone evacuated from the downtown Kelowna area.

In addition, families of those injured or missing can go to the Parkinson Recreation Centre.

Evacuees of the @cityofkelowna downtown area can go to the Salvation Army at 1480 Sutherland Avenue for Emergency Support Services (ESS). Separately, families of those injured or missing should go to the Parkinson Recreation Centre (McIntosh Room) at 1700 Parkinson Way.

Mission Group, the developer behind Brooklyn Block, has released a statement about this morning's tragic incident, calling it a "catastrophic failure."

The statement confirmed what KelownaNow had previous reported, that the crane fell as crews began the dismantling process.

"We are unable to confirm the number and extent of injuries at this time," explained the statement.

"Mission Group expresses its deepest sympathy for the families of those affected by this tragedy. We have set up support services to help those in need."

Kelowna General Hospital issued a 'code orange' at 11:30 am in response to the accident, but it was stood down around 1 pm.

A media briefing is about to begin and KelownaNow will provide more updates as they are made available.

"The purpose of our investigation is to identify the cause of the incident, including any contributing factors, so that similar incidents can be prevented from happening in the future," explained an email to KelownaNow.

The agency can't provide any more details at this time.

(UPDATE: July 12 @ 12:50 pm) - Emergency crews continue to filter in and out of a downtown Kelowna construction site where a crane collapsed shortly before 11 am today.

KelownaNow has now confirmed that the process to take down the crane began this morning and that's when the tragic incident occurred.

One woman at the scene told our reporter, Sarah Jones, that she rushed to the scene after getting a panicked call from her son, who worked at the site.

A woman describes the frantic phone call from her son, who was working at the downtown Kelowna construction site where a crane collapsed this morning. pic.twitter.com/gNIu96ozpE

"He called me frantically and said 'mom, I'm okay, but the crane just fell,'" she explained.

He told her that people were hurt, but he didn't know if anyone had been killed.

Earlier this morning, the woman explained, her son told her to say a prayer for him, as it would be a very dangerous day at the site during the crane takedown.

Kelowna General Hospital has declared a 'code orange', as the emergency room prepares for an influx of patients due to the collapse.

There have been widespread reports of two casualties, but nothing has been officially confirmed at this point. 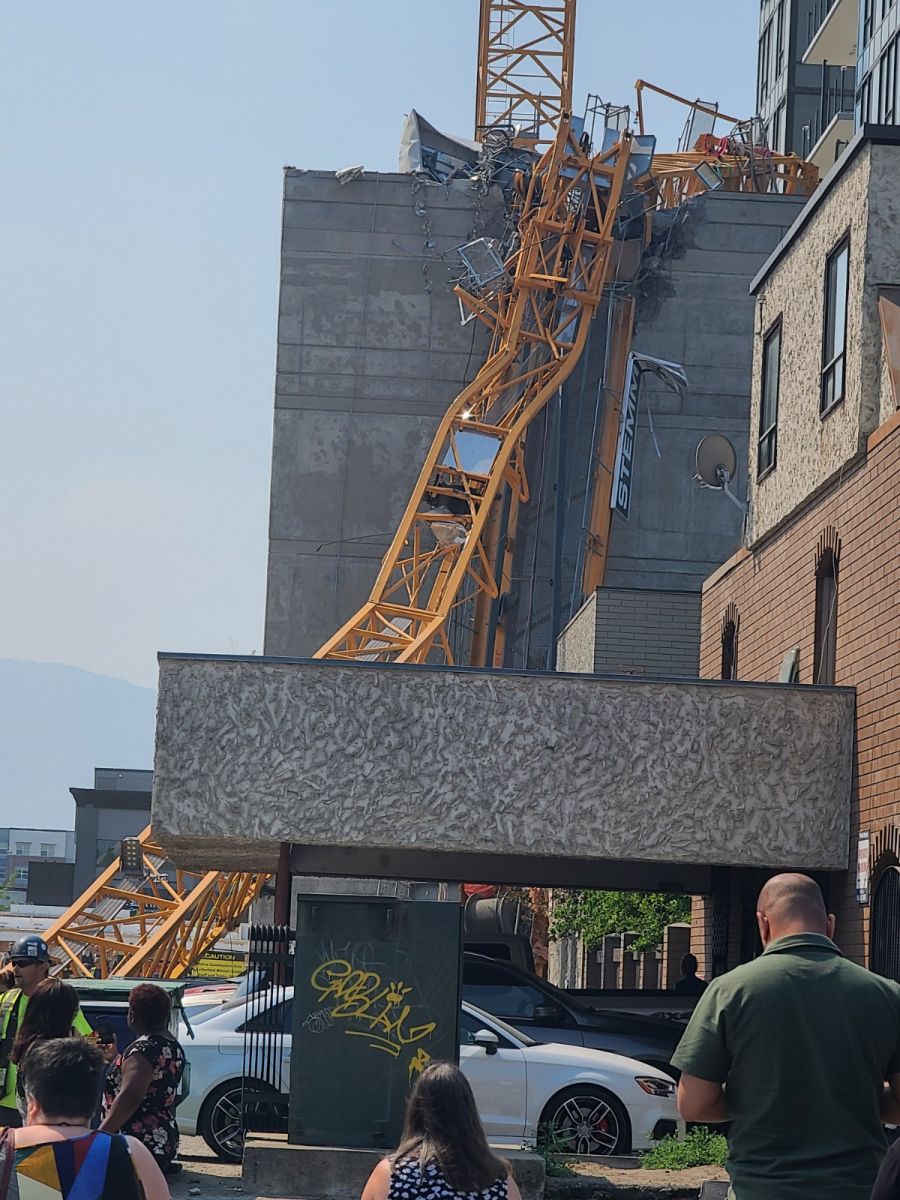 (UPDATE: July 12 @ 11:50 am) - A large chunk of downtown Kelowna is being cordoned off as emergency crews continue to respond to a crane collapse at the Bernard Block development.

The RCMP has been moving people as far away as Lawrence Avenue to the south and Richter Street to the east.

The top section of the crane on the building collapsed shortly before 11 am and there's concern about the rest of the crane that is still standing, albeit precariously.

A witness told KelownaNow that it "sounded like an earthquake" when the crane fell. 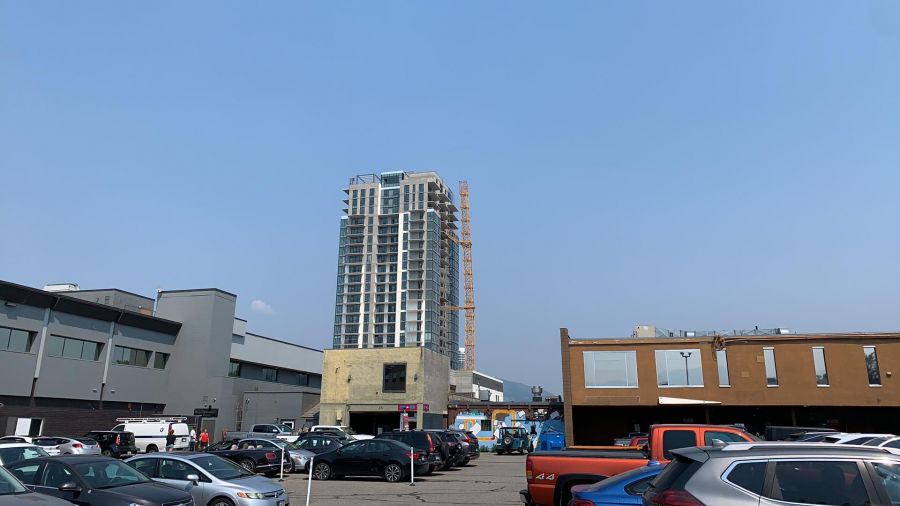 There are reports of possible deaths and injuries, and witnesses have speculated that there was a person inside the crane at the time of the collapse, but no official word has been provided at this time.

Power has been cut for a large chunk of the downtown core and FortisBC is reporting 2,500 customers are affected.

The area is being evacuated and the public is asked to stay away at this time.

NowMedia has a reporter at the scene and will continue to provide updates as they're made available.

(Original story: July 12 @ 11:20 am) - The area surrounding Bernard Avenue and St. Paul Street in downtown Kelowna is currently being evacuated due to an industrial accident.

It happened shortly before 11 am at the Bernard Block development. 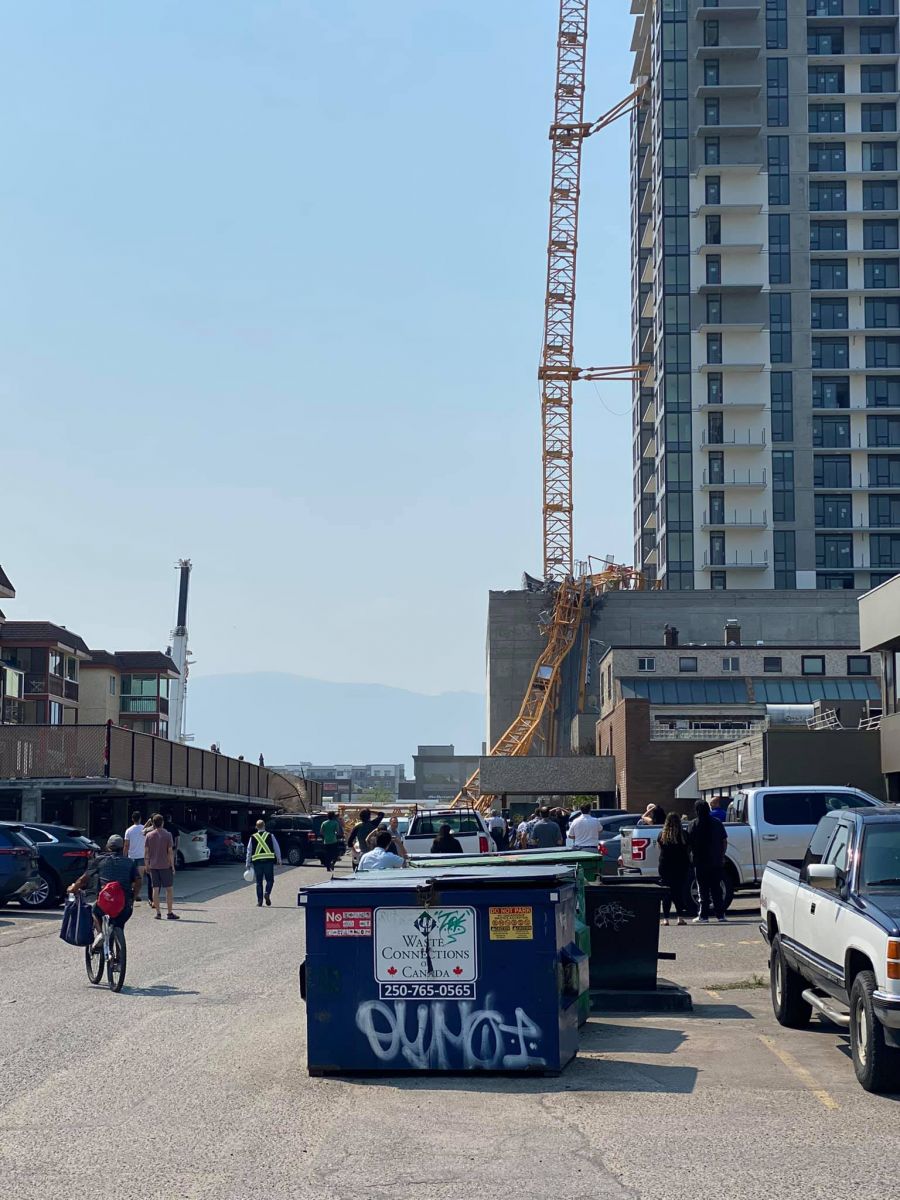 The RCMP is asking anyone in the immediate area to please leave as soon as possible and stay away until further notice.

Sections of Bernard Avenue, St. Paul Street and Bertram Street have been closed as well and motorists should avoid the area. 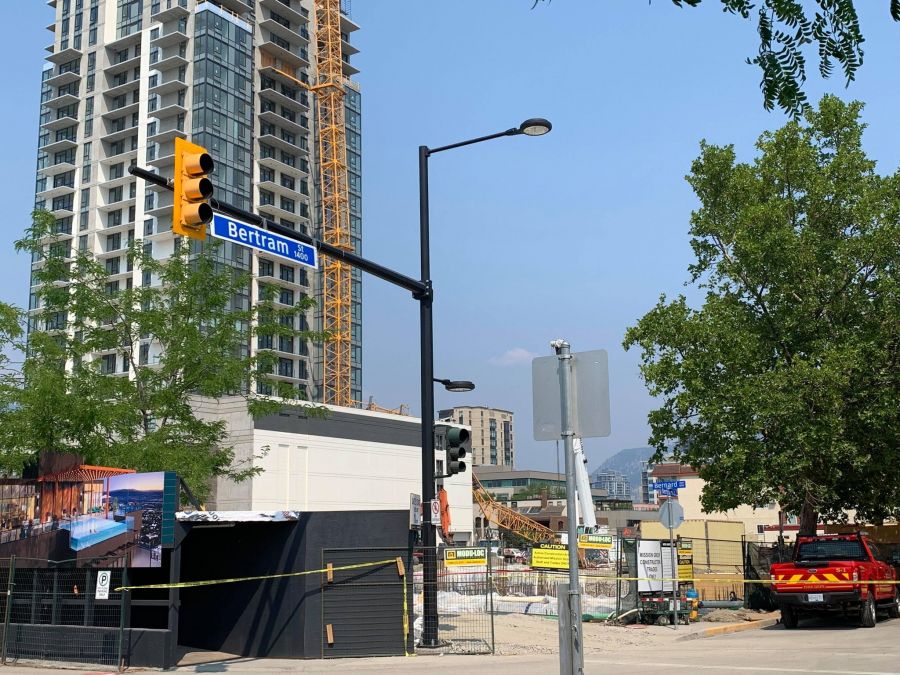 Multiple readers have also reported to KelownaNow that power has been cut to many downtown buildings as emergency crews respond to this incident.

NowMedia has a reporter heading to the scene and will update the story as more information becomes available.