The BC River Forecast Centre has downgraded the notice back down to a high streamflow advisory.

The flood watch was put in place Monday morning following significant rainfall in the Okanagan.

According to the BCRFC, the period of unsettled weather brought 10-40 millimetres of rain to the region since Sunday.

"On Mission Creek near East Kelowna, flows peaked on July 4 at 55 cubic metres per second (m3/s) and receded, with a minor peak last night of 41.2 m3/s, with current flows at 37 m3/s," the BCRFC explained.

"Current forecasts suggest continued recession within this system. Indeed, weather forecasts for the South Interior indicate less rain totals to the end of the week than we experienced over the past 72 hours, although unsettled weather is forecast to continue into Friday."

While the flood risk has decreased, the high streamflow advisory for Mission Creek and other waterways in the region remains in place for now.

That means that no major flooding is expected, but minor flooding in low-lying areas is possible.

To see the current flood warnings and advisories in place, click this link.

(Original story: July 4 @ 9:50 am) - The BC River Forecast Centre (BCRFC) has upgraded Mission Creek from a high streamflow advisory to a flood watch.

It comes after heavy rain fell in the region on Sunday and carried over into Monday morning.

While conditions have settled a bit, more rain is in the forecast for the start of the work week. 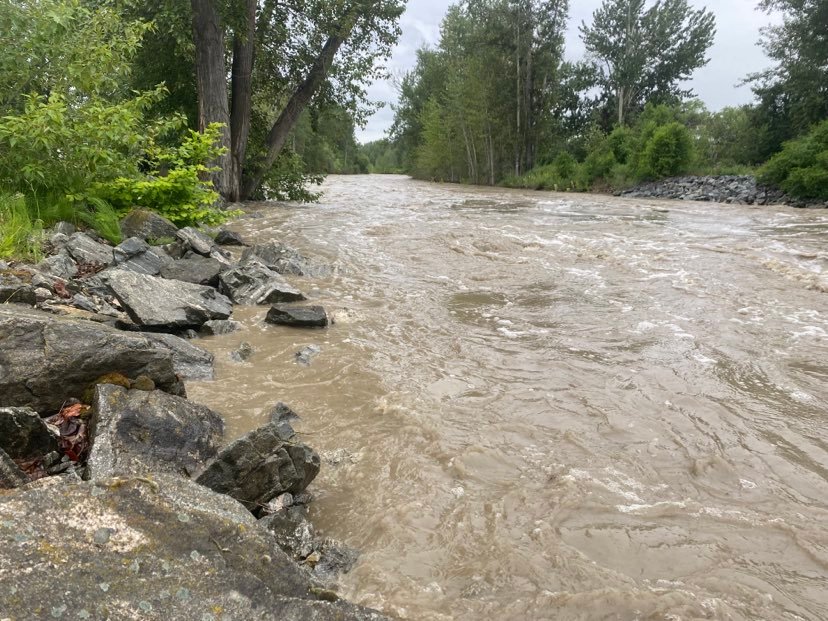 “A period of unsettled weather is occurring across southern British Columbia. Rainfall amounts in the 5 to 35 mm range have been observed throughout the region since yesterday,” notes of a BCRFC release.

“On Monday, an upper low is expected to track across south-west BC, bringing wraparound precipitation with the potential for heavier rainfall and thundershowers to areas in the South Interior and Kootenays.”

The BCRFC said that additional rises up to 80-100 cubic metres per second are possible this afternoon and into Tuesday, depending on additional rainfall amounts in the coming hours.

People are advised to stay clear of fast-flowing waterways and potentially unstable riverbanks at this time.