On Tuesday, Kelowna City Council decided to support a liquor licence application for Revelry, an entertainment venue that will be located at 1383 Ellis Street.

Despite opposition from nearby residents, council voted unanimously to forward the application and their recommendation of support to the provincial Liquor and Cannabis Regulation Branch.

However, following last week's public hearing a resident living in a nearby condo building is now looking to take legal action against the decision. He is citing concerns about noise, public intoxication and other disruptive behaviours.

In city staff’s report the two-storey building is described as a “spectator entertainment establishment” that could service 685 people at a time.

Staff added that Revelry would “fill a void in the arts and culture scene through providing a new live music venue in the community.”

Speaking in support of the proposal, councillor Luke Stack said the venue would fit nicely into the neighbourhood.

“It is part of the venue of what we’re developing in downtown Kelowna: a cultural district to attract people who want to live in that environment,” said Stack.

“At the end of the day, I actually believe this is strengthening our cultural district, and probably some of the reasons we see so many residential buildings coming into this area to enjoy it.”

According to staff’s report, Revelry would operate as a food primary “urban events hall” from 7 am to 5 pm before switching to a liquor primary “music hall” until closing. 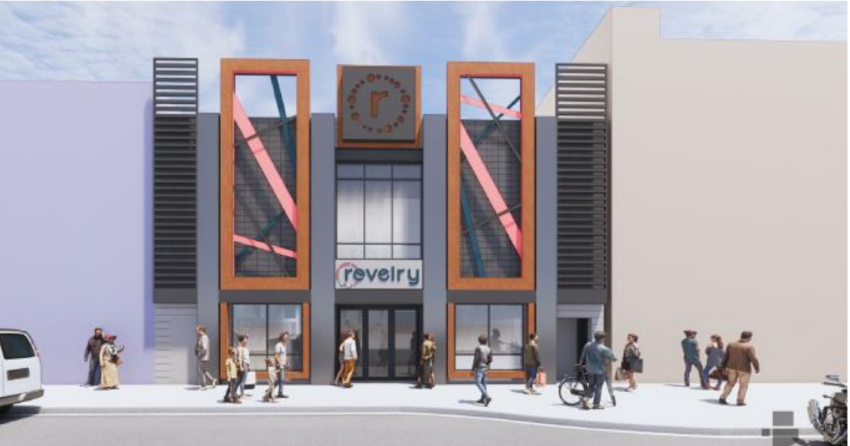 He explained that residents in the Madison condo building located next door were concerned that Revelry would turn into a nightclub and bring late night noise and disruption to the area.

“This application will be extremely disruptive to the life of residents in the Doyle Ellis corridor,” stated Pederson, who pointed out several recently approved housing applications in the area.

Revelry owner, Lee Simon, countered these claims by saying that those who believed that it would become a nightclub were misinformed.

When asked what he thought the difference was between a music hall and a night club, Simon said people were caught up on focusing on what already existed and applying it to his new concept.

“I think, to be honest with you, part of the problem with this process is that (people are focusing) on what exists already, that everybody tries to imply what they know that exists to something that is new,” stated Simon, who added that his background was in the hospitality industry.

“One of the focuses here is that, if you look at it, it is a food and music hub. Seeing that combination come together … is very different than the traditional night club or music venue model.”

Simon noted that the focus of the venue would be more on live music and food service with a limitation on alcohol service.

During the public hearing on Tuesday, mayor Colin Basran stated that he believed there was an obvious divide between these two parties and requested that they work together to ensure better communication.

“It would be my hope that with this project moving forward whether they are able to set up an arrangement where they can share feedback with one another. There’s got to be a way past this in order to have that dialogue and address concerns.”

Regardless, as a result of city council’s decision, Pederson has created a GoFundMe to raise costs for legal aid and as of Sunday it has raised $4,900 of the $25,000 goal.

There is no known timeline as to when the liquor application will be approved by the provincial branch.