How do you make maple syrup?

You start by choosing trees that are mature enough to handle the process. Trunks with a diameter greater than 25 centimetres are usually fine.

And then you need a solid stretch of appropriate weather. A late winter day when the temperature climbs above freezing in the afternoon then drops below freezing at night usually prompts the sap to flow. 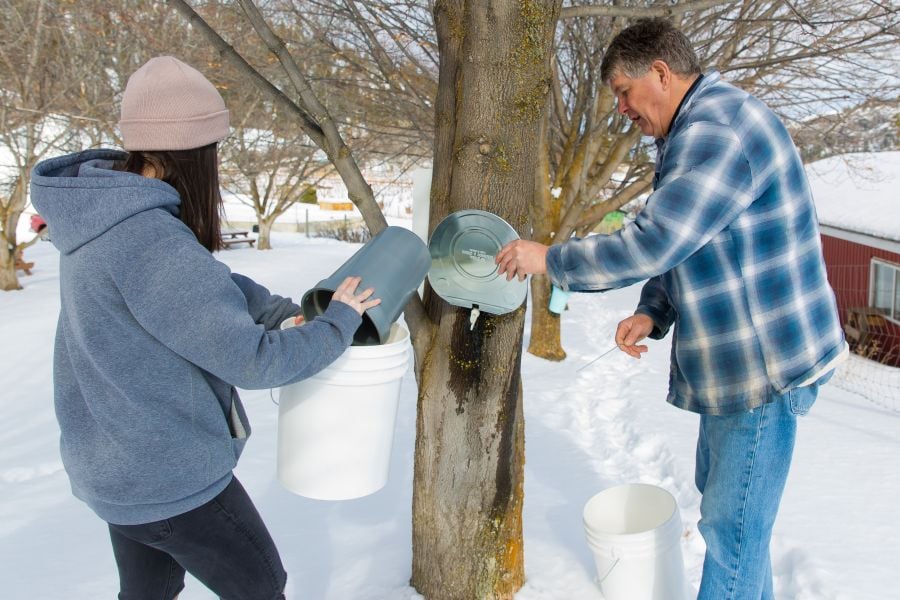 Then the work begins in earnest. You carefully hammer a spigot into each of the qualifying trees, and then suspend a covered bucket underneath. If you've played your cards right, each of those buckets will hold at least some "sap water" when you return the next day.

Then it's time for a little science. You'll take your collected sap water and pour it into a contraption called a "boiler," where the water slowly evaporates and you're left with an itsy-bitsy allotment of pure maple syrup.

Along the way, you'll be enveloped in a cloud of steam. And you'll need to bone up on a device called a "refractometer" too. Without it, you'll never accurately hit the sweet spot. 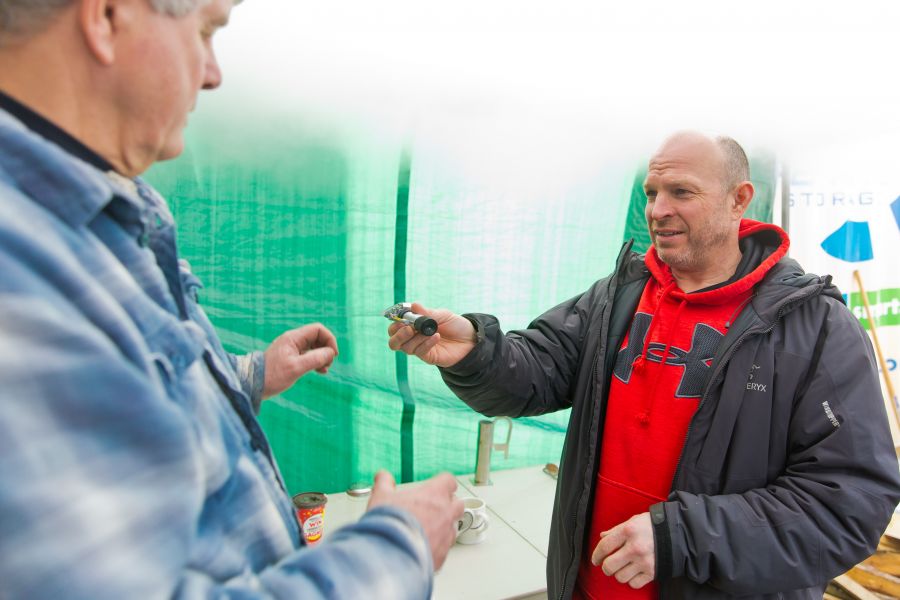 And whatever you do, don't over boil. Do so and you'll get a burnt crystallized mess and be forced to start all over again.

And one final thing. You'll probably need to head to Quebec. It's historically had the right trees and the right weather, and it's the epicentre of global maple syrup production. Out here in B.C., practically nobody makes maple syrup.

At least 'til now. 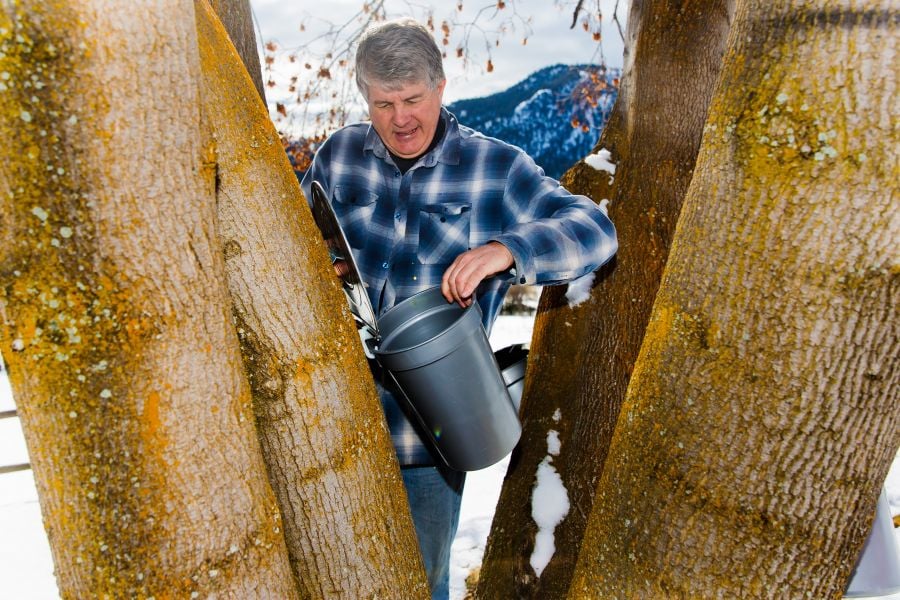 Two years ago, Roch Fortin, founder and owner of Summerland maple syrup purveyor Maple Roch, set out to change all that. He wanted to prove that B.C. really could produce maple syrup. Maybe not in the mass quantities coming out of eastern Canada, but enough to market at a boutique level.

And he figured he knew where to do it. Right in his own community.

"There are different kinds of maple trees," he explained last year. "What you have naturally up here in this region is a lot of Norway maples, which have very low quantities of sugar, which means you have to boil a lot of sap water before you get much good quality syrup." 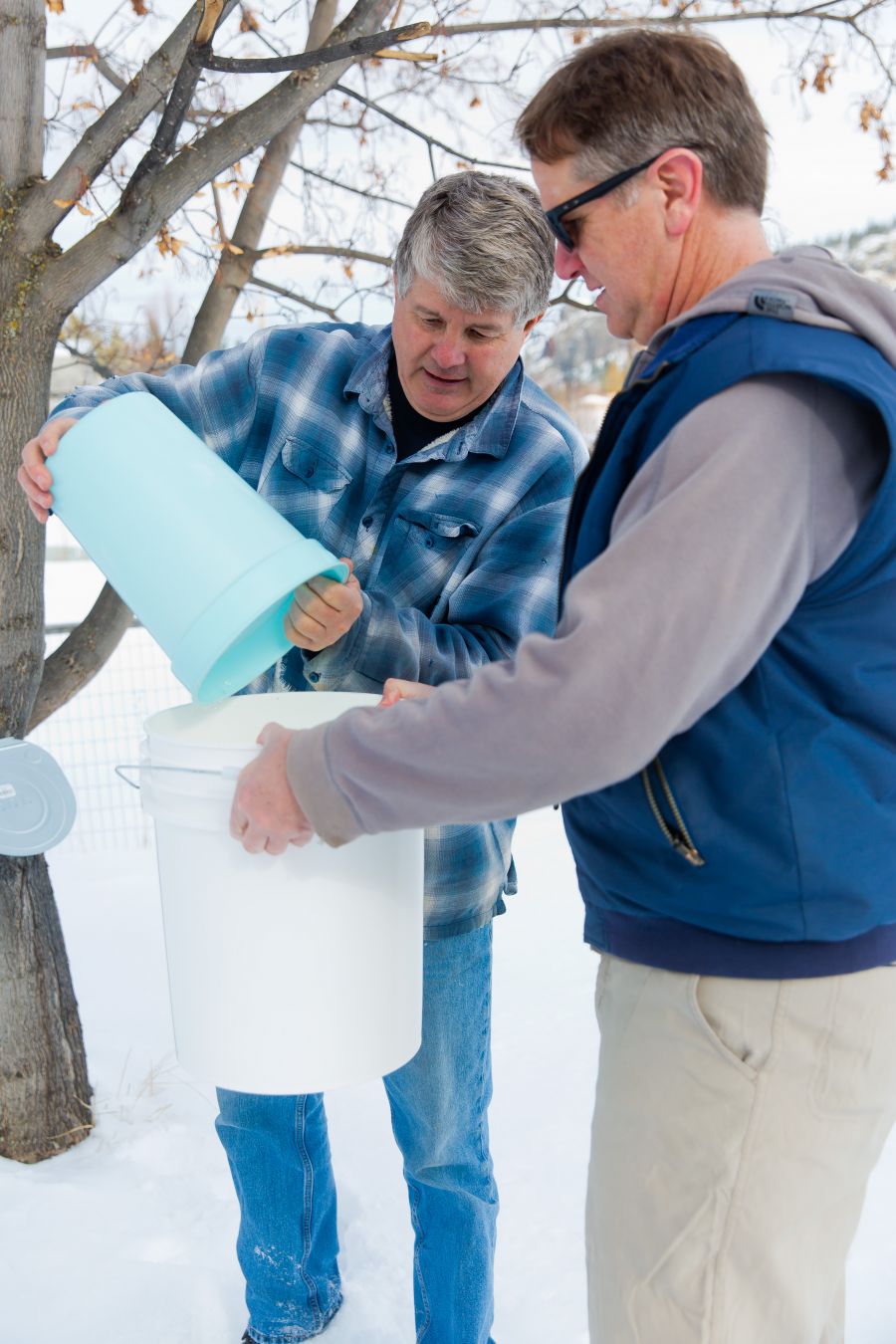 But, said Fortin, there might also be some of the high-producing trees too. "When they built the Kettle Valley Railway, the big cheeses of CP Rail had huge estates here in Summerland. They built canneries for the fruit business for their steamships. And I suspect that some of the maple trees were brought here from back east."

In April of 2018, Fortin conducted a "test run," tapping several trees in the picnic grounds of Summerland cidery Nomad Cider. And he was able to create a small amount of genuine, made in B.C. maple syrup.

But Fortin's equipment, and knowledge, was suspect. If he was ever going to produce appreciable amounts of great tasting syrup, he'd need to upgrade both.

So Fortin went to the source.

"I had the pleasure of going to Quebec City, and that is where I met Denis Fontaine and his family. An incredible family, you could tell the passion. And we've been good friends ever since."

"Denis makes so many products for us right now. But he looked at my system and said, 'This is pretty sad. Let's see if we can find you a machine.'"

"So he went to get it for me, he shipped it here, and after a while I said I don't know how to operate it. So he said, 'What if my dad and I come there and give you a hand?'" 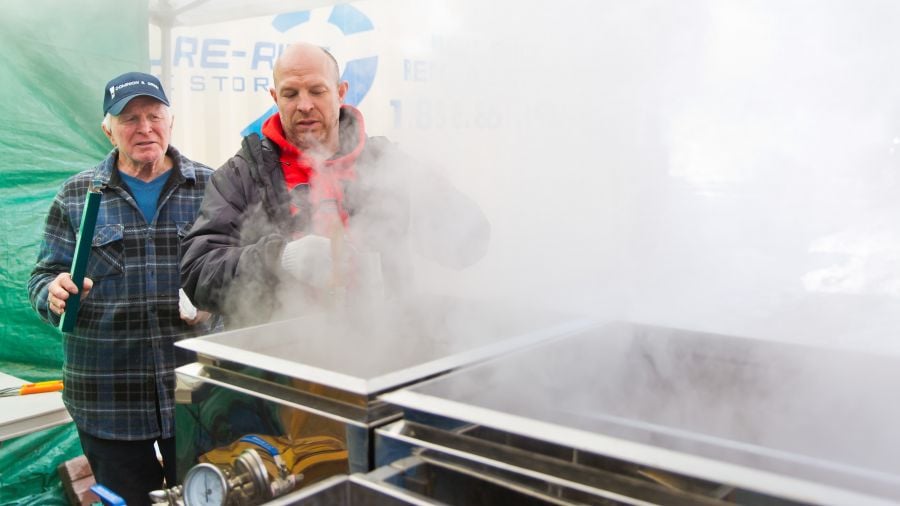 That's precisely what happened last week. Denis and his dad Jean-Guy, with a combined 100-plus years of maple syrup harvesting and producing experience between them, flew in from Quebec to show Fortin how it's done.

And last Thursday morning, they fired up the shiny new wood-powered boiler early, just outside the back door of the Maple Roch store. And Fortin, with friend Bernie Ens and student Athena Baklus, strolled through the snow at Nomad Cidery once again to collect sap water from the trees they'd tapped the day before.

The weather wasn't ideal. Fortin had scheduled the time based on historical weather data, not knowing we'd have a month-long cold snap. (Who did?) But they gathered enough to put the new gear through its paces. 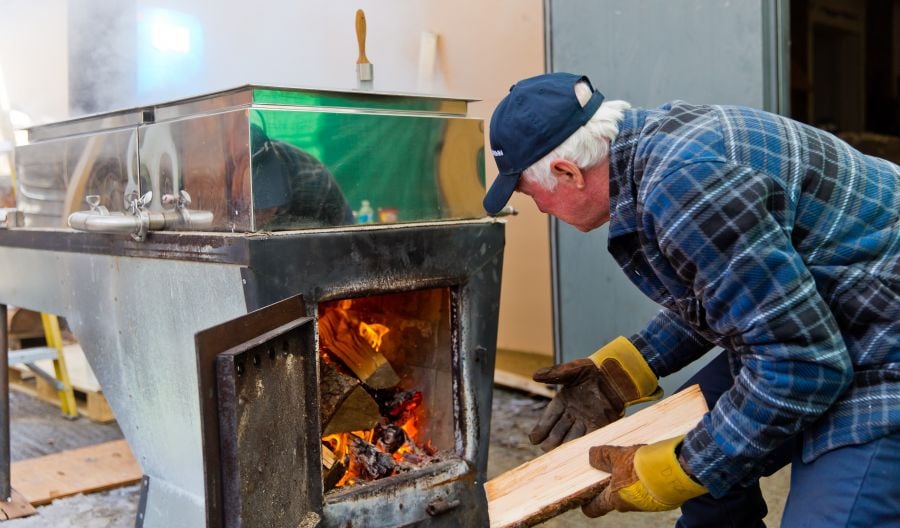 And the final results were surprising. The sugar content, for instance, was four percent and even higher, a figure that downright startled the Quebec gang.

"It's very good flavour. We are surprised for the maple of British Columbia," said Denis. "We're also surprised how much sugar is in the sap. Three and four percent in the sap of this tree. That's very, very much over my expectations."

As the afternoon wore on and the sap water continued boiling, Jean-Guy spent much of his time adding wood to the boiler firebox and overseeing the situation, while Fortin and Denis often huddled together, pouring out new samples of the syrup and staring at the results on Fortin's brand new refractometer. 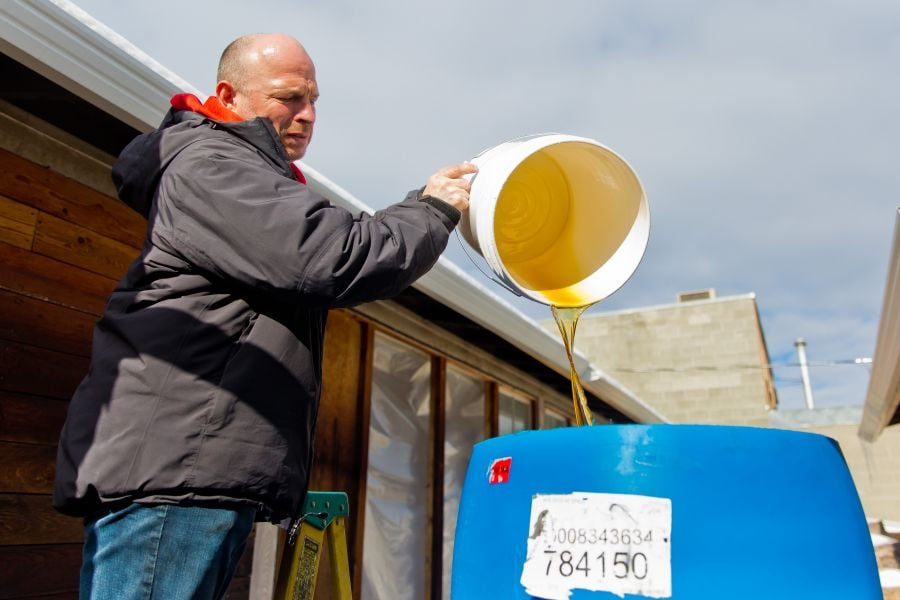 And they'd all take turns pouring the sap water into a large drum, suspended high in the air, where the whole boiling process began. From the drum, the solution would run through a tube to the boiler, where it made its way through several compartments, becoming thicker and less watery as it progressed. At the very end was a faucet, through which finished maple syrup would flow.

And yes, the entire tent was enveloped in steam. That's what happens when 90-plus percent of the sap water evaporates.

"The maple syrup density is measured in 'Brix,'" explained Denis. "Sixty-six brix is what we want. Higher brix means too much boiling. Less means too little. This part is similar to winemaking." 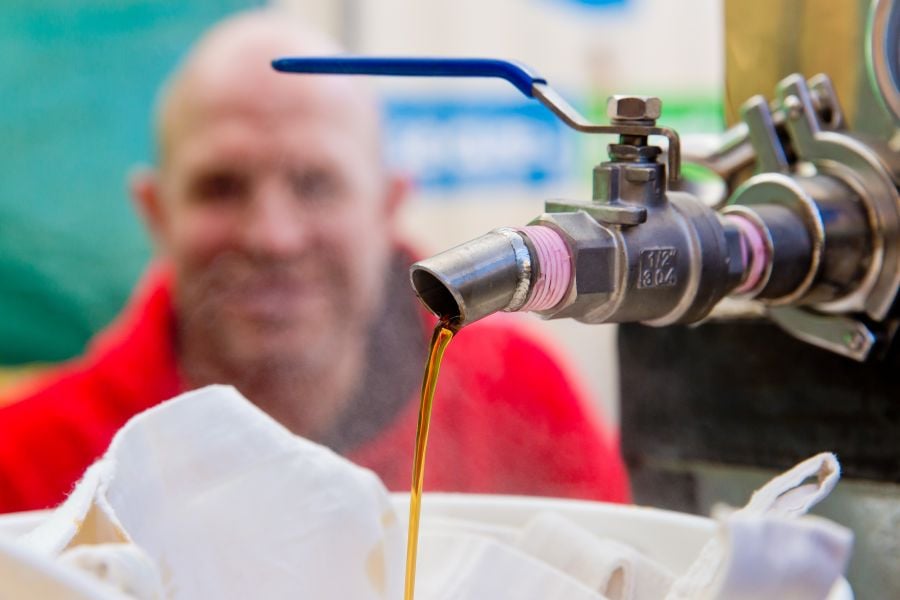 We got to try the results - standalone, and mixed with the syrup Fortin normally imports from New Brunswick. And it was just wonderful both ways. Who doesn't love a great maple syrup?

Going forward, and if the weather plays along, Fortin hopes to produce 50 litres of Summerland-harvested maple syrup this year - a first for anyone in the region. And he won't be confined to the trees at Nomad Cider.

"We have five locations so far around Summerland. A lot of people in the community have come forward and asked if we want to come over and tap their trees." 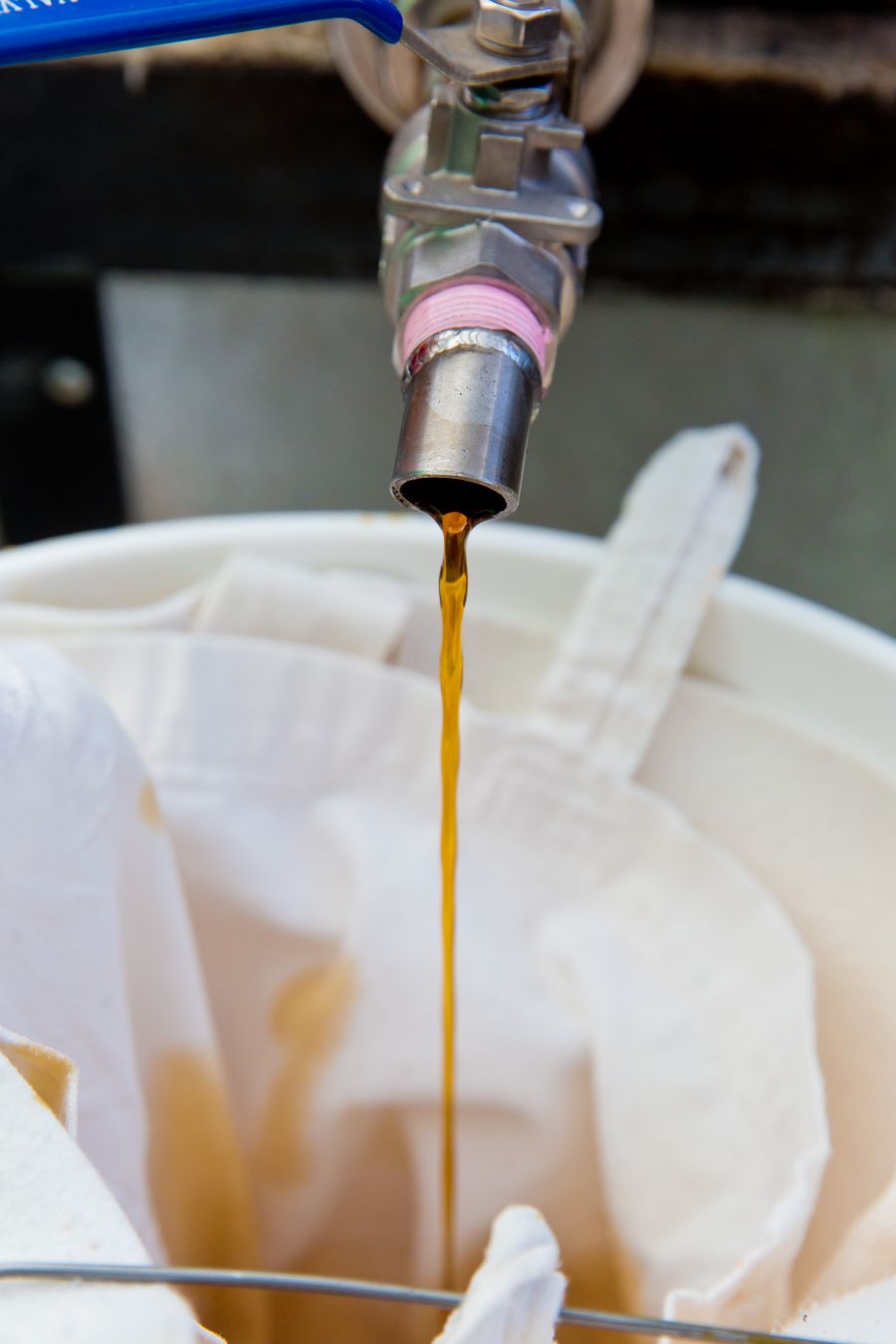 He's also hopeful his local syrup will find its way into a range of Summerland produced goodies. Stuff like the maple stout beer that will come out of brand new Maple Roch neighbour Breakaway Brewing later this summer. Or Nomad's very own maple bourbon cider.

As for the straight-up syrup, Fortin says, "We're taking pre-orders right now. And if you check out our Facebook site, every time we boil maple syrup, people can check when we're boiling."

And he encourages anyone who's interested in the process to drop by and check it out. "People can come by and take a look and help out, put a log on the fire, or do whatever they want to do. It's really all about community participation."