They should have booked a bigger room. 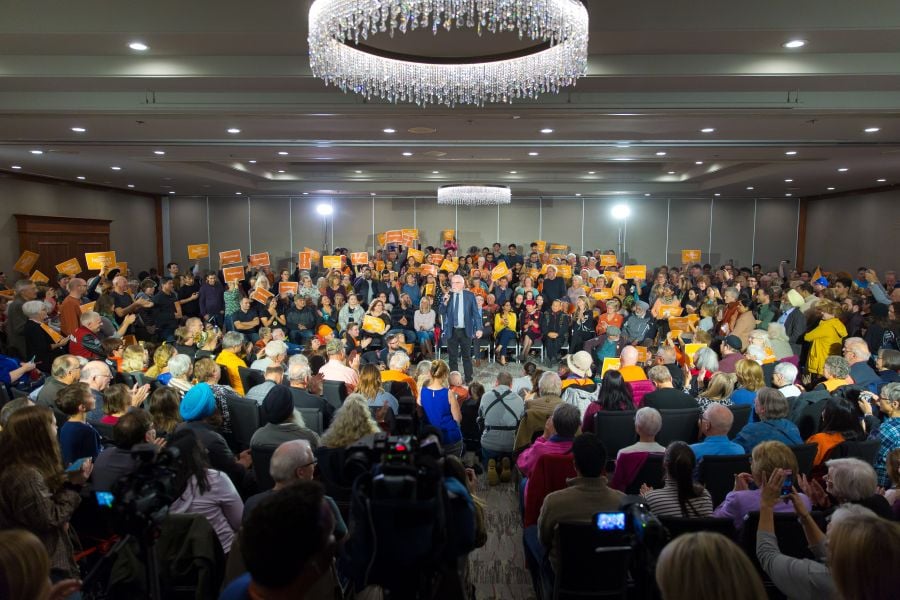 Riding a wave of popularity - at least according to recent polls - the Jagmeet Singh express crashed into Penticton last night, luring a crowd of approximately 400 into a main floor conference room designed for quite a bit fewer. 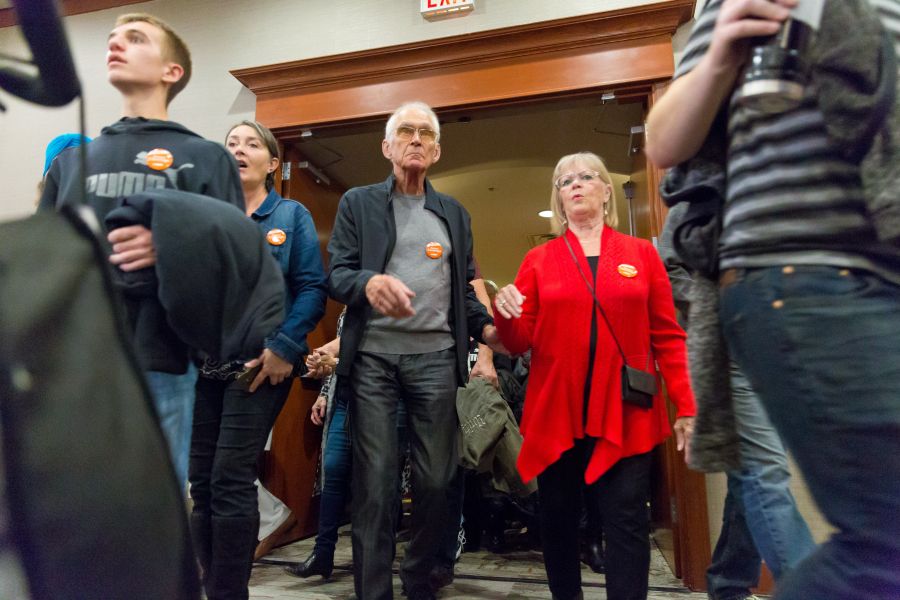 Indeed, scores more who simply couldn't fit in were forced to wait outside the doors, hoping to catch a glimpse of their hero after the rally. 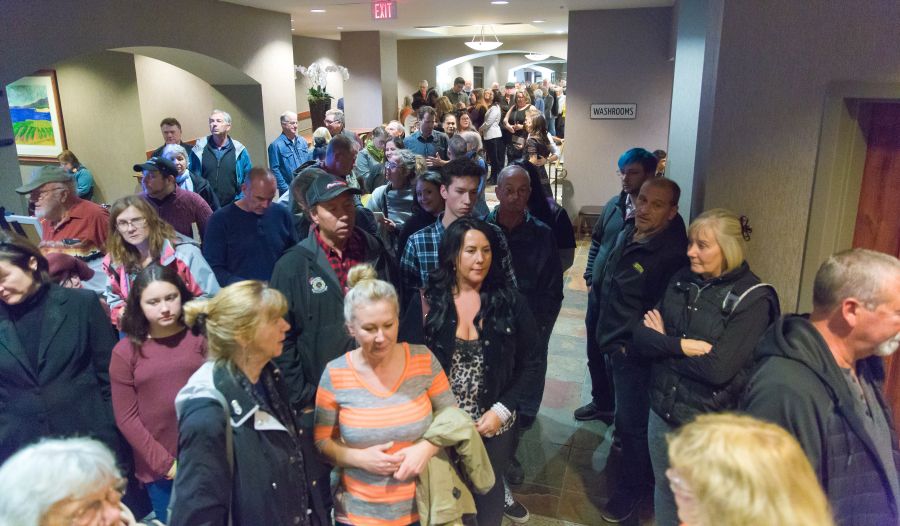 The night was billed as "UpriSingh" in honour of a Singh tweet from earlier this week. Apparently, the leader of the federal New Democratic Party knows a thing or two about social media.

He also knows how to work a crowd. His very first move after he squeezed himself into the sardine can known as Salon A was to hoist South Okanagan--West Kootenay MP Richard Cannings high into the air. 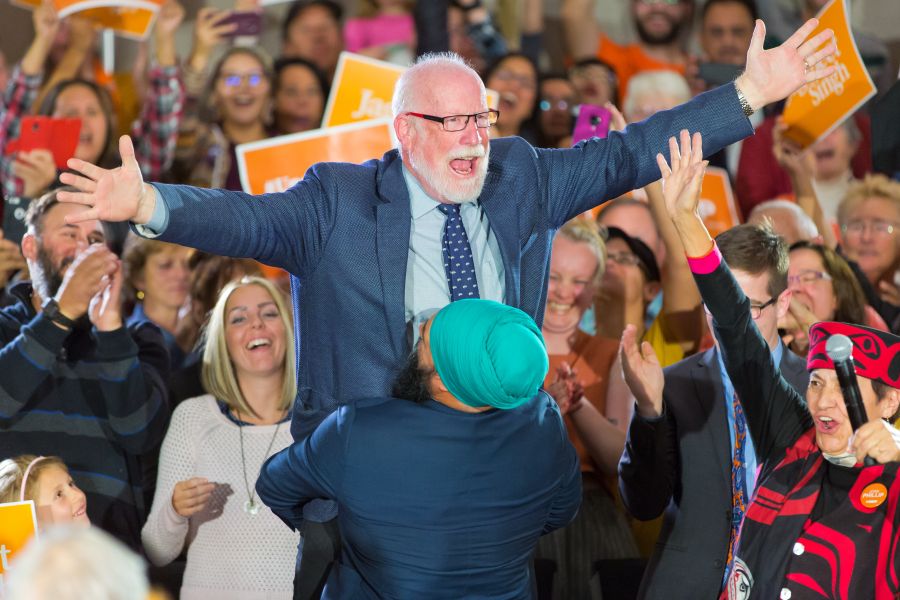 Cannings fed off it, defiantly stretching his arms above his head. And the noise level grew to a fever pitch. 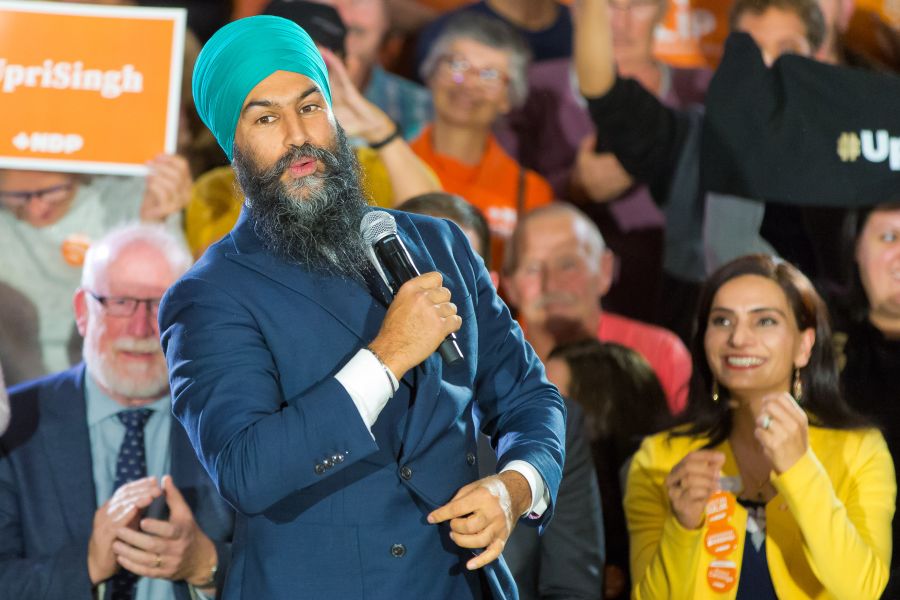 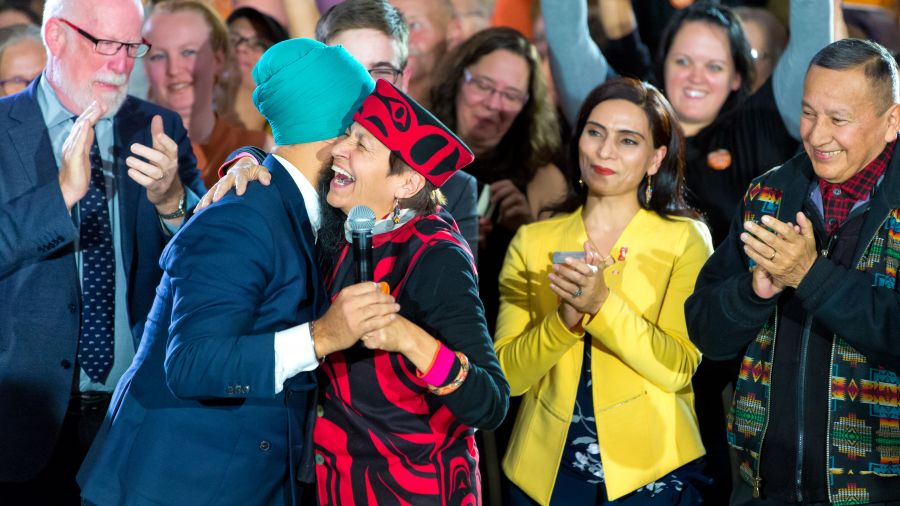 But Cannings was clearly the reason for Singh's visit to Penticton - his second of the campaign. Polls suggest the incumbent is in one heck of a dogfight with the Conservative Party of Canada's Helena Konanz.

Prior to the rally, the excitement was palpable. 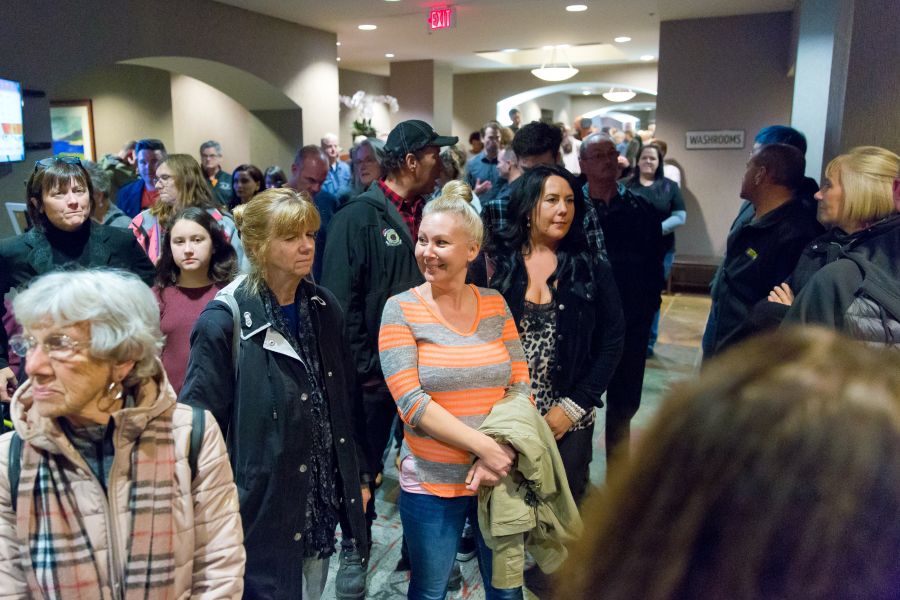 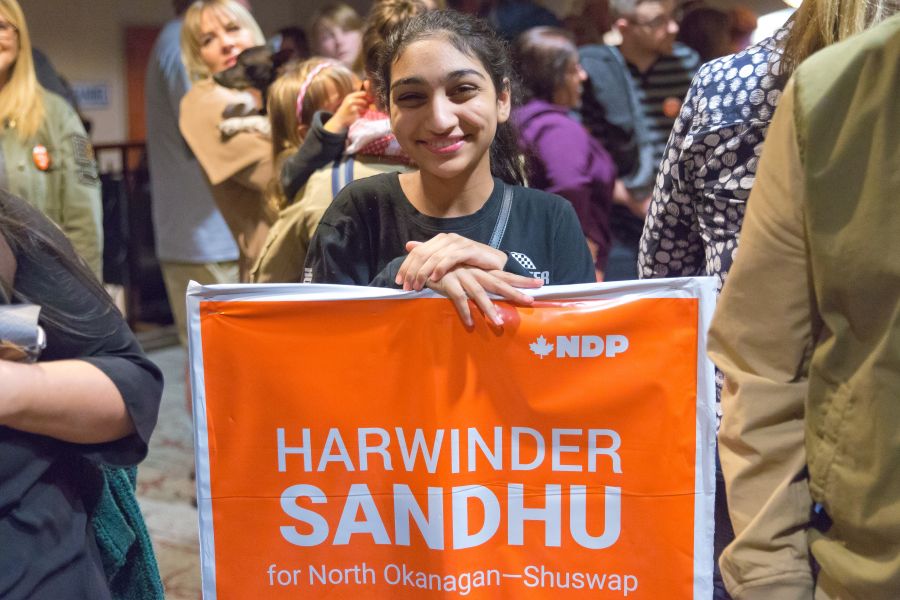 Crammed onto a bench with other NDP supports, some of whom had partially painted faces, was Effie Parsons.

"Things that are so important to the country, like feminism, LGBTQ, environmentalism, and immigration, he represents all of them," she said, "I've really liked him for quite awhile, but I'm seeing him all over social media now, especially over the past couple months." 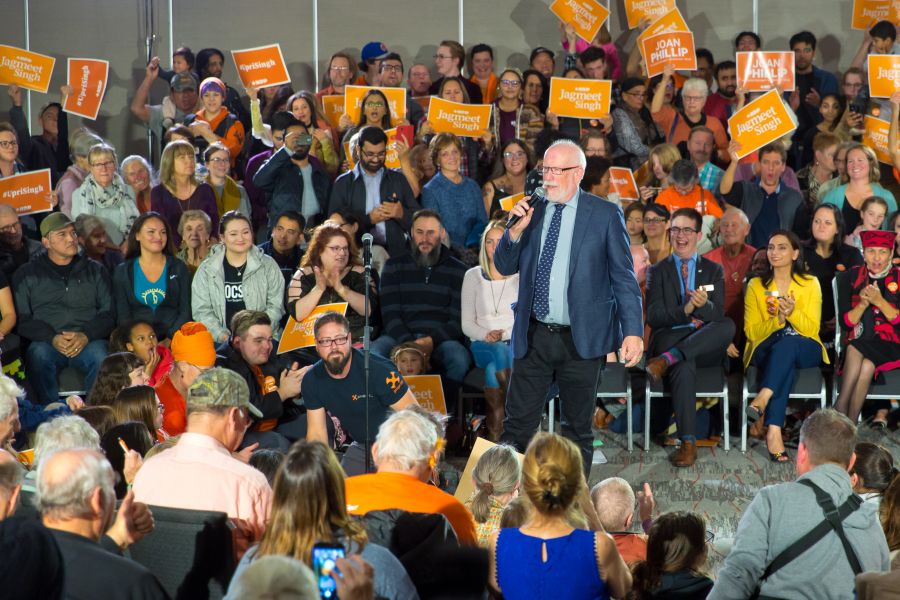 Clipboard in hand, Cannings' campaign worker Ross Arnott said he was there to see Singh, but also to "do a little rah-rah for Richard. I've been on his campaign since the beginning, and I wanted to see how many people we'd get out tonight."

"I've seen Jagmeet elsewhere in BC and these things are electrifying," he said. "We're very lucky he was able to get up here to see us."

Arnott freely admitted the South Okanagan--West Kootenay contest is tight. "Yep, there's a fight here. The Conservatives are a little more silent than the NDP, but they're there." 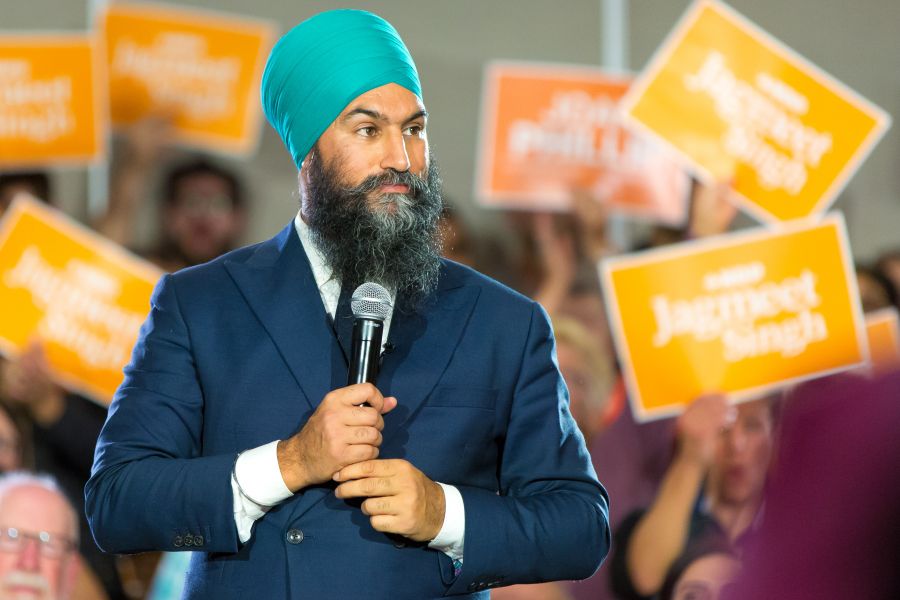 "But the vibe I'm getting is that the NDP have made a huge surge nationally. Whether they can form a government, I'm not sure. But we're going to give it a damn good try."

Jas Khun Khun came all the way from Kelowna with family and friends. "The way he approaches people and wins them over is just amazing," he said. "It would be great for Canada to have someone diverse, someone that's different."

Zaw Tun and Amanda Graziani of Penticton, taking selfies of themselves minutes before Singh entered the room, were clearly thrilled to be there. 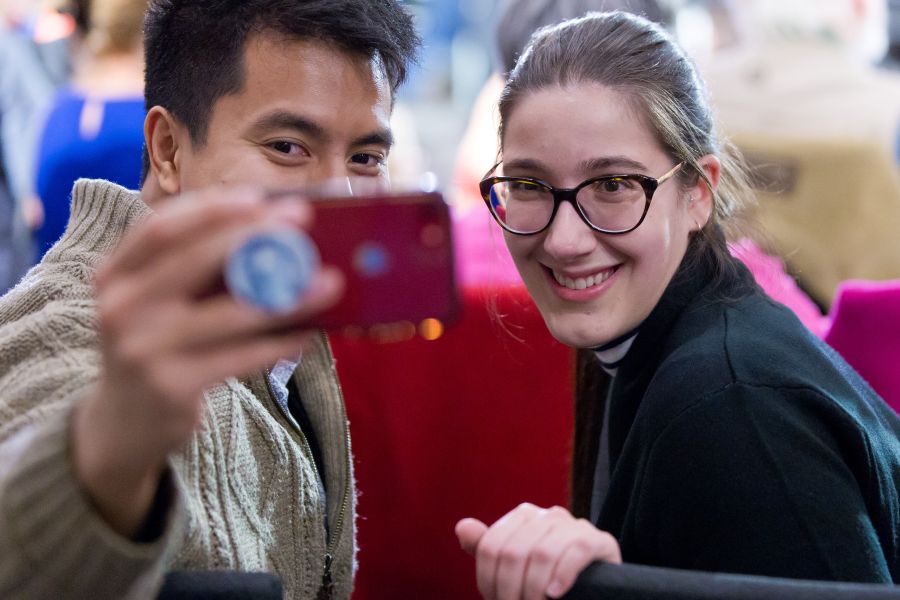 "I met Richard Cannings during the Climate Strike," said Tun," and had a conversation with him. I was borderline at the time, but I talked to him and I think he's a good candidate."

"I think his presence is very genuine," added Graziani of Singh. "He seems like a heartfelt guy. This election I'm very involved."

MP Cannings made his way through the throng prior to the opening of the doors. "Penticton's excited," he said. "There's a big hockey game on, there's the symphony, there's Oktoberfest (elsewhere at the Lakeside), yet this is where it's at." 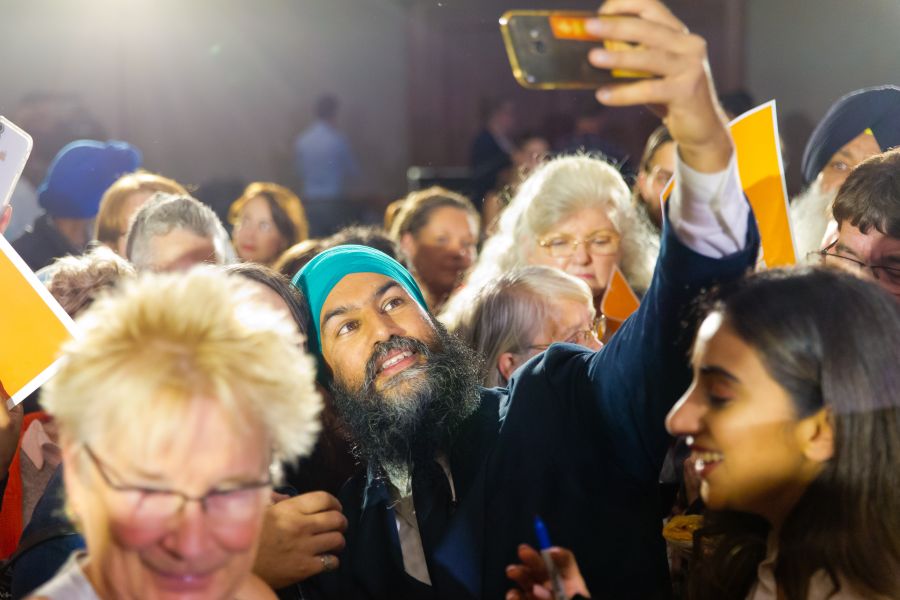 Asked if he felt he needed the boost, Cannings said, "We've been riding that surge of popularity, and we're happy to have him here to finish the campaign."

Expectedly, the rally itself didn't contain any new messages. It's too late in the campaign for that. 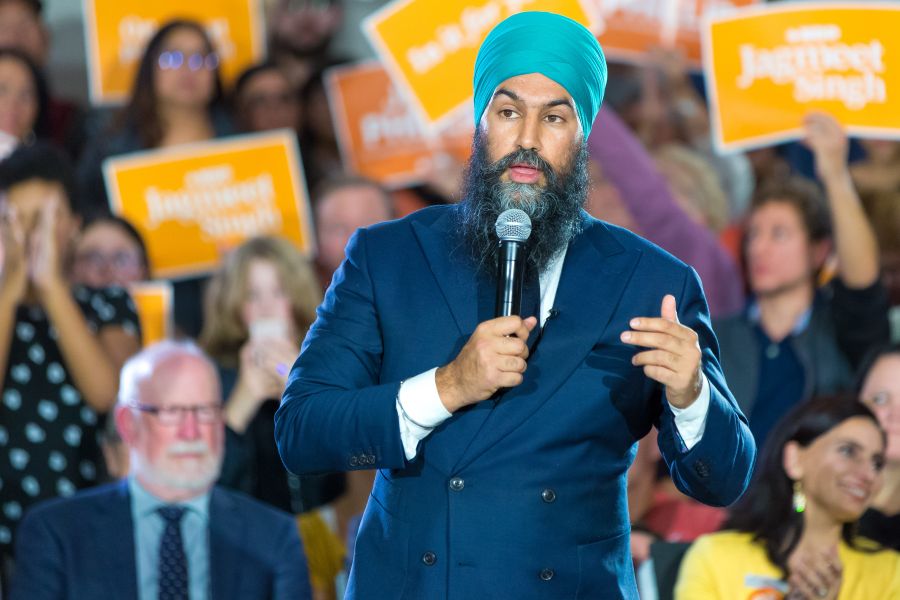 Singh touched on a variety of issues, including affordable housing, climate change, and even pricey cell phone plans. He reiterated that he'd "never work with a Conservative government," and repeatedly made a point of zinging both the Liberal and Conservative parties.

The crowd cheered every dramatic setup, and many of them stuck around later for an autograph and selfie session turned mob scene. 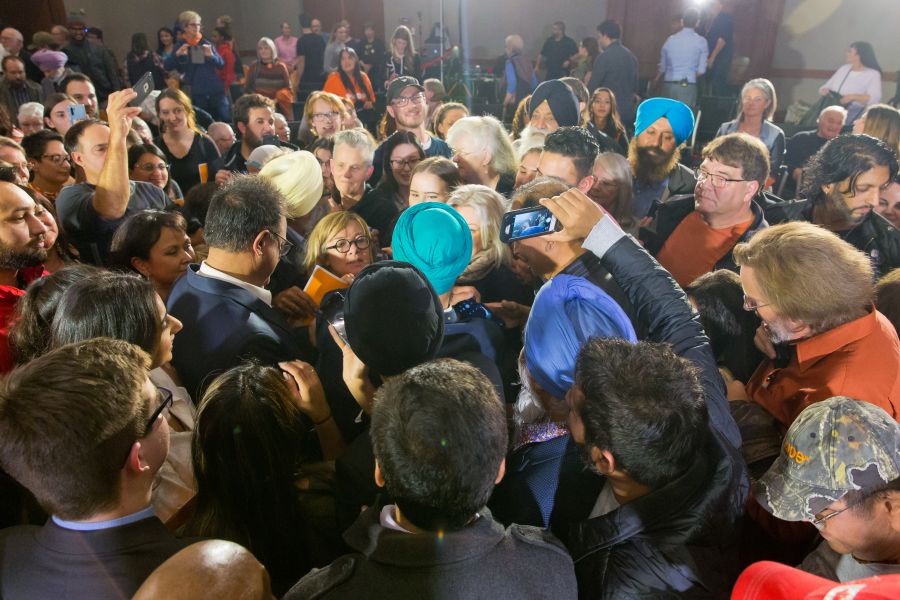 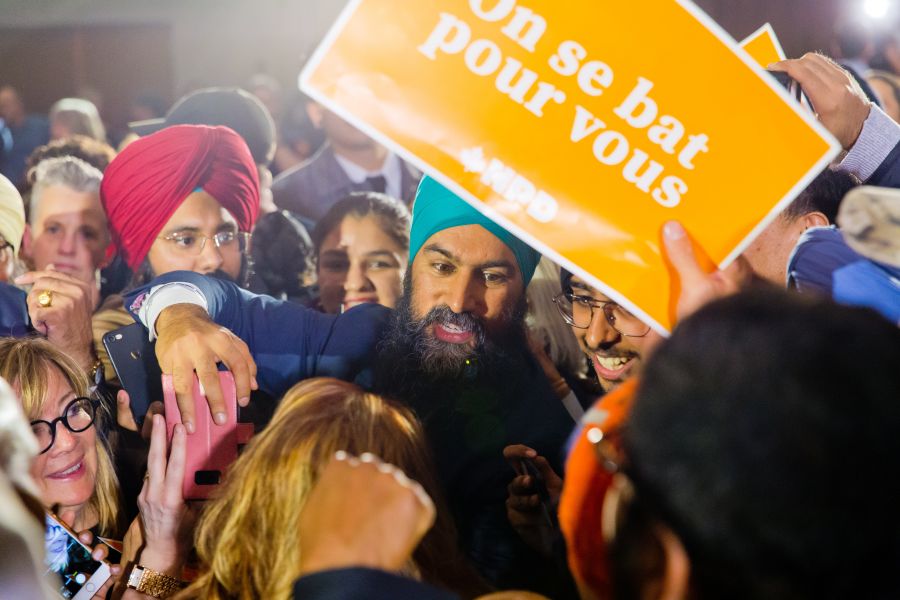 Now, there's little left to do but vote. To find your nearest polling station, go here.