A new commemorative licence plate is available in British Columbia for recipients of the Memorial Cross.

In a special ceremony in Vancouver this week, Ron McCully was presented with the first Memorial Cross license and he commented on the significance of the plate.

“This new licence plate is meaningful for my family, as this pays tribute to my son, Cpl. Matthew McCully.”

There will also be an option of a keepsake plate, should a Memorial Cross recipient want to receive a plate, but not display it on their vehicle.

The Memorial Cross was created in 1919 and is granted to the loved ones of Canadian Armed Forces personnel who have either died in the line of service, or whose death was attributed to their service.

It’s granted by the Government of Canada to up to three individuals that the fallen member has named.

“Our troop sacrifice so much for Canada and we are grateful for their service,” said Transportation and Infrastructure Minister Todd Stone. “The Memorial Cross licence plate is a small way we can honour these brave service members, who have paid the ultimate price for our freedom.” 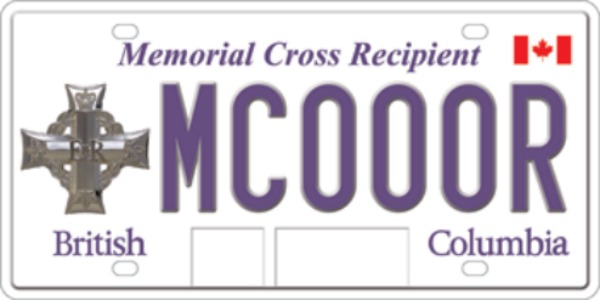 As for the details of the plate, it has purple letters on a white background, with a Memorial Cross symbol on the left and the Canadian flag on the right.

Besides B.C., Saskatchewan is the only other province in Canada that offers a Memorial Cross plate at this time.

There is no fee for the licence plate and you can apply for one by contacting ICBC.