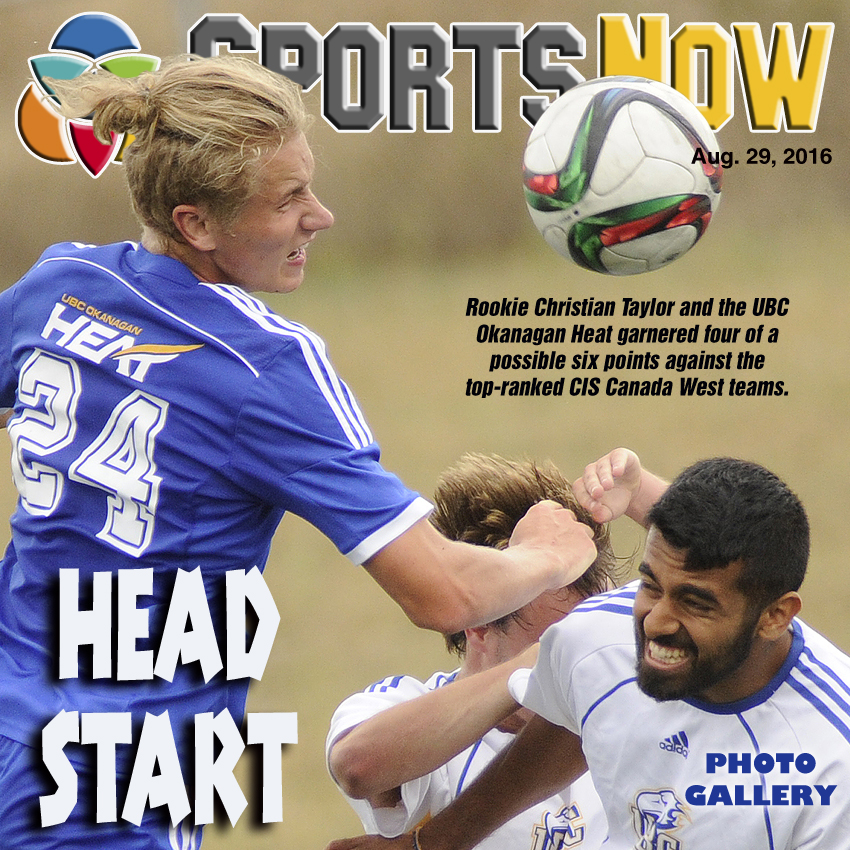 With 10 rookies on the roster, the UBC Okanagan Heat men’s soccer team is expected to have more lows than highs this CIS Canada West season.

Surprisingly, the highs outscored the lows on the opening weekend at UBCO’s Nonis Field.

Up against the pre-season-ranked No. 2 University of Victoria Vikes on Saturday and the top-seeded UBC Thunderbirds, the host Heat earned four of a possible six points with a 1-0 win over the Vikes and a 1-1 draw with the heavily favoured T-Birds.

“It’s always promising when you can get a start like that — especially when you consider how young we are,” understated head coach Dante Zanatta after’s Sunday conclusion of the homestand. “It was a learning experience, but being able to come out of that learning experience with four points is a great confidence builder for this group.

“Of course we’re going to enjoy the results from the weekend, however we’ll need to buckle down and work on the things we’ll be talking about starting on Tuesday,” added Zanatta, beginning his sixth season with the Heat.

Zanatta concedes there’s still a steep learning curve for his young team, but he’s confident in their ability to make the adjustments.

“We’re excited about the possibilities and that the boys have the capability to make huge strides this season.”

That the Heat held the territorial edge and produced more scoring chances against UVic on Saturday was a testament to the team’s work commitment, according to Zanatta.

“There was a willingness on the part of everyone to work for each other in both games,” he noted.

One of four first-year players to start in Saturday’s season opener, defender Spencer Young, an Okanagan Mission Secondary School graduate, scored the only goal of the game in the 88th minute to secure the three points against Victoria.

Receiving a pass out of a scramble from second-year midfielder Robert Hamilton of North Vancouver, Young buried a shot in the top right corner from just inside the 18-yard box.

For Young, fresh off leading the OKM Huskies to a B.C. School Sports AA provincial championship and having played last season with the Kelowna United U18s after two seasons with the Thompson-Okanagan Football Club, it was his second Grade A scoring chance of the second half. Moments earlier, his shot from about 25 yards out was punched just over the crossbar by Vikes’ keeper Noah Pawlowski. 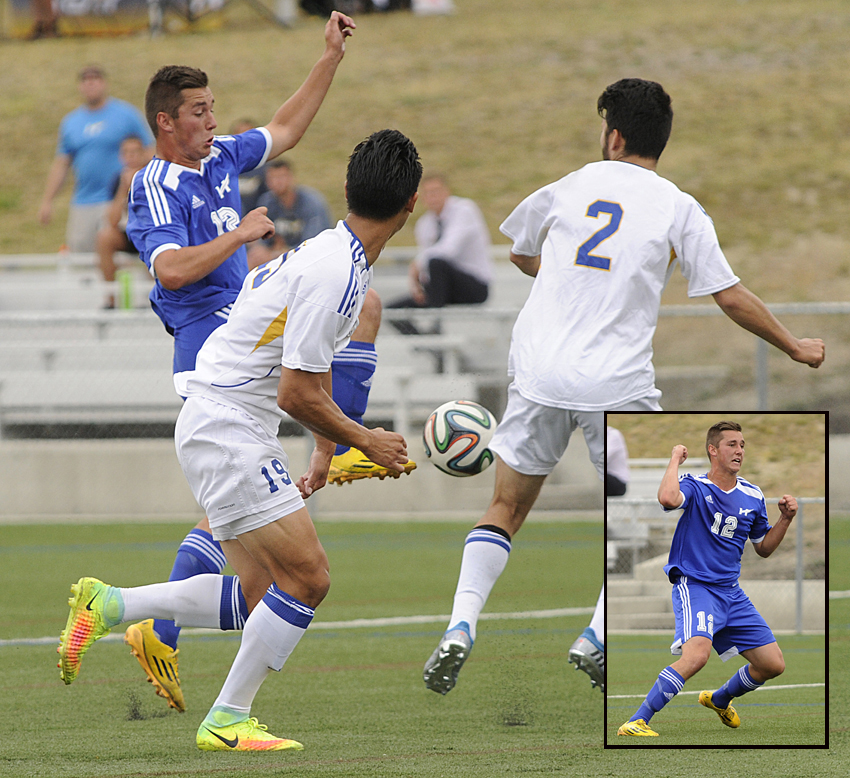 While the Heat were “full value for the win” according to Zanatta, the Vikes did come on strong in the late going, forcing newcomer Mitch McCaw of Calgary to make two impressive saves to secure his first CIS shutout after three seasons at Concordia University (NCAA Div. 2) in Portland, Ore.

On Sunday against UBC, McCaw was back in goal and was forced to make six saves, the most impressive coming in the 70th minute with the game tied and the T-Bird taking over the momentum. He dove outstretched to make a stop on the Thunderbirds’ Kerman Pannu. 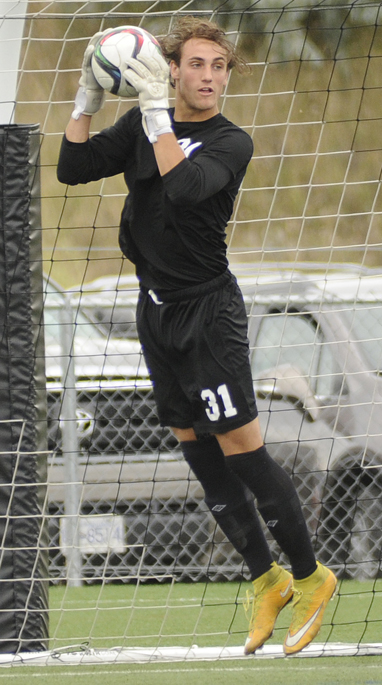 That McCaw played in both weekend games was something of a surprise considering the outstanding efforts of Heat keeper Tait Cuthill last season, but Zanatta said McCaw earned the starts with his impressive play in the pre-season.

“We have full confidence in Tait and Nick (rookie Nicholas Reitsma of Kelowna) — it’s a luxury to have three solid goalkeepers who had quite a battle leading up to the season openers — but at this point, our staff felt Mitch, with his experience, ground play and kicking ability, would give us the best chance to win. He certainly lived up to expectations on the weekend,” added Zanatta, who felt it was “unfortunate” his team was unable to sweep the weekend games.

After forward Luke Warkentin capitalized on a rare misplay by All-Canadian UBC keeper Chad Bush for a goal in the 22nd minute, Pannu tied the match for the T-Birds with a penalty shot early in the second half. The foul that led the equalizer was hotly disputed by the Heat.

While the Heat trailed in possession time and gave up 13 shots on goal to UBC, Zanatta said he was impressed with his team’s play and ability to stick to the game plan to at least pick up the one point against the defending Canada West champions and 13-time national champs. UBC had defeated the Heat in all five of their previous meetings since UBCO had joined the CIS two seasons ago. 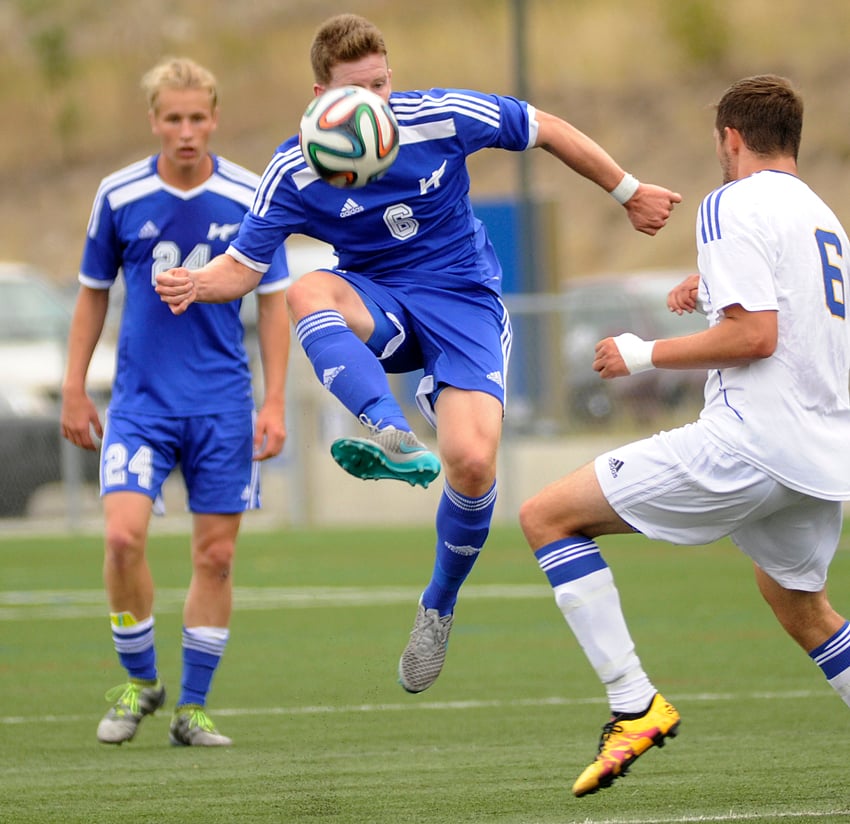 “Admittedly, our young players found the speed of the CIS a real eye-opener,” noted Zanatta. “But good players will adapt and learn quickly. And I believe we have a group that falls into that category.

“There will be trials and tribulations with these guys, however if they come with the commitment they had on the weekend — especially on Sunday — they’ll be very competitive and will surprise some teams going forward.” 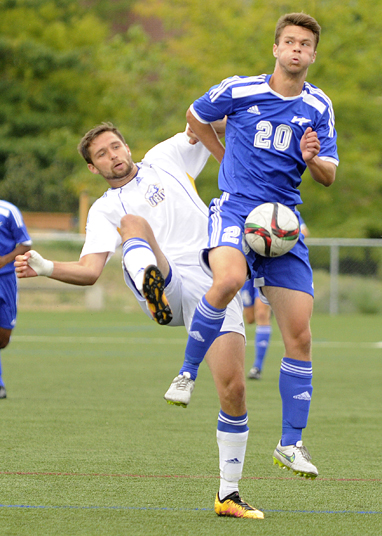 The Heat will be out to build on their solid start when they travel to Langley to take on the 2-0 Trinity Western Spartans on Friday. They’ll play the Fraser Valley Cascades on Saturday in Abbotsford.

HEAT SPOTS: Mitch McCaw was selected as the Heat’s player of the game on Sunday against UBC while sophomore defender Hamish Walde of Salt Spring Island earned the honour on Saturday vs Victoria . . . Spencer Young was forced to leave the after heading a ball late in the second half of Sunday’s match, but is expected to be back in action this weekend . . . The UBC Okanagan women’s soccer team played a pair of pre-season exhibition games on the weekend. They tied the visiting Grande Prairie College Wolves 2-2 on Saturday and doubled the Douglas College Royals 4-2 on Sunday.

Thu
23℃
Make Homepage Advertise with Us