Catching up with Kelowna athletes at the 2017 Canada Summer Games

Team BC has been dominating at the 2017 Canada Summer Games, earning second place with 66 medals.

The Canada Games, which happen every two years alternating between Summer and Winter, are the largest multi-sport competition in the country, and it is a great honour for those chosen to attend.

Lots of Team BC's talent is from right here in Kelowna, so we chatted with some of the local athletes that are competing at the games. 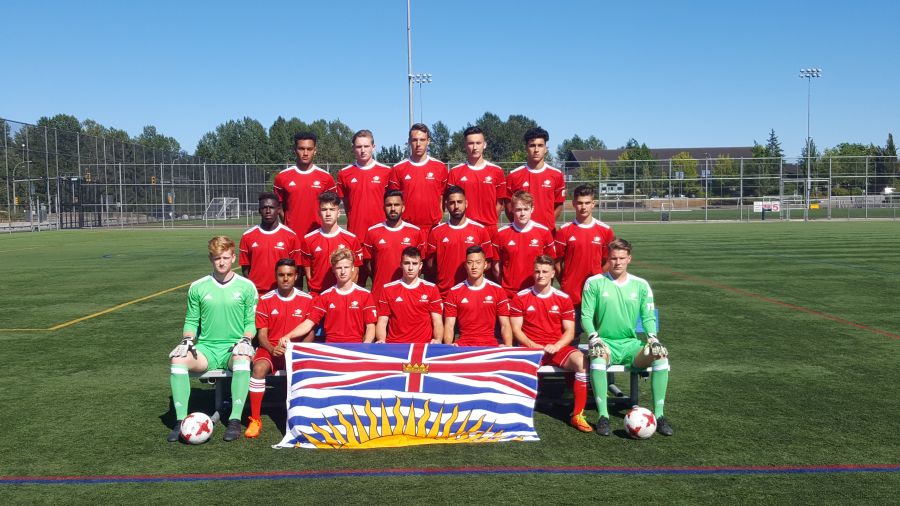 Carl Vanderkraats is an 18-year-old, Okanagan Mission Secondary school graduate. He started his soccer career at the age of 5 in North Vancouver, before moving to Prince George and playing for the Prince George Youth Soccer Association where he learned to play goalkeeper. Next up was a move from Prince George to Kelowna, where he recently finished his youth career playing for the Thompson Okanagan Football Club.

Vandercraats’ time at the Canada Summer Games has only begun, with one game under his belt. Due to a late equalizer from their opponent, Saskatchewan, the team tied the game 1-1. Their next game is Wednesday against Nova Scotia, which will determine whether they go to the quarterfinals the following day. Overall, the games have been a positive experience for the young goalkeeper, with his highlight being experiencing the atmosphere and being surrounded by high level athletes from across the country.

“Having the opportunity to represent your province and your family is an amazing accomplishment,” said Vandercraats. “Wish us luck as we hope to bring home that gold medal!”

This fall he is set to begin taking sciences at UBCO, while playing goalkeeper for the UBCO Heat. 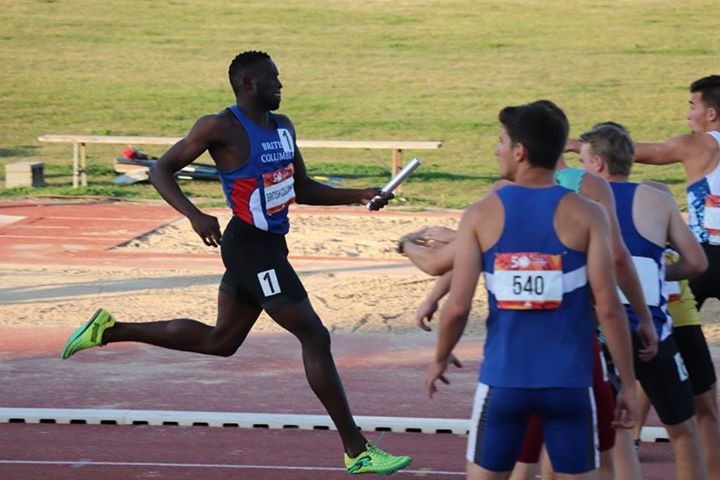 Jerome Blake is 21-years-old, and moved to Kelowna three years ago from Jamaica to live with his Mom. He went to Rutland Senior Secondary School for a year, and is hoping to attend Okanagan College this fall.

Blake participated in track and field at a young age in Jamaica, doing high jump, long jump, and hurdles, though he admits he was more interested in becoming a cricket player. Once he moved to Kelowna and met his coach Pat Ledding, he became more interested in the sport.

Blake finished the games with two gold medals and one silver medal. The closest competition happened at the 100m finals, as the athletes were so close in times. Blake finished with a time of 10.379 seconds taking silver, while gold medal winner Karson Kowalchuk, finished in 10.377 seconds.

Despite his success at the games, Blake admits that there was some disappointment, as they didn’t have a chance to finish the 4x100m relay team race. A mishap and dropped baton disqualified the team, throwing Blake for a loop.

“It was a little difficult to refocus and get ready for the 200m the next day, but I was able to get it together and win gold in the 200m,” said Blake.

Up next for Blake is a much needed break. He plans on taking a few weeks off before starting to work on his plans for the next season. 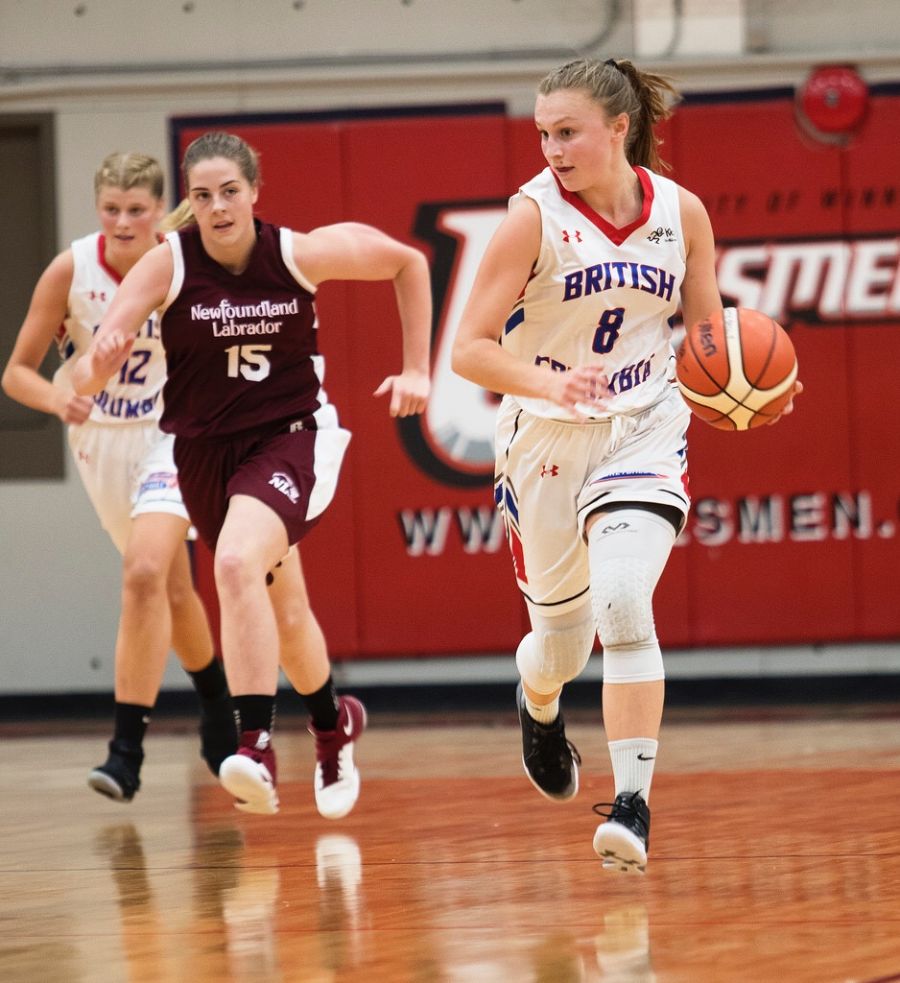 Rachel Hare is 17-years-old and currently attends Kelowna Secondary school (KSS). She started playing basketball in the third grade with the Steve Nash program. By going to summer camps and playing throughout elementary and middle school, she was able to join the provincial team at age 14.

At the 2017 Canada Summer Games, Team BC came in 8th, though she was only able to play a few games as she sustained a concussion in the second game. The concussion protocol took over, and did not allow her to play except a few minutes in the last game. Hare is excited to enjoy the upcoming season as a senior on the KSS basketball team, and is pursuing the next step of playing university basketball.

Her favourite part of the games was the opening ceremonies, as it was packed with people and performances. Another cool moment? Meeting Justin Trudeau.

“We were waiting outside for breakfast and Justin Trudeau came in and we got to meet him,” said Hare.

“It was a super cool once in a lifetime opportunity,” added Hare. 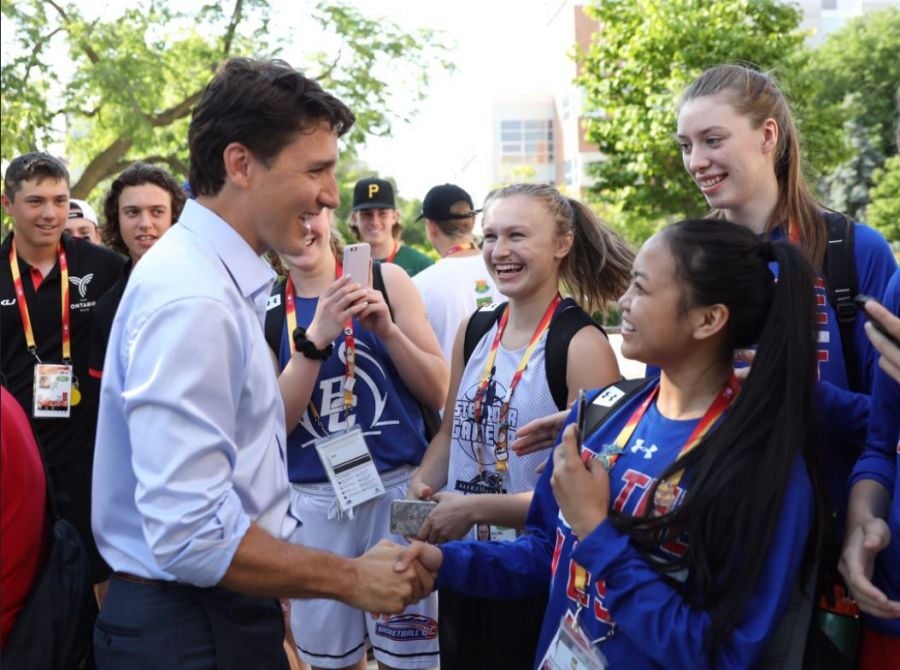 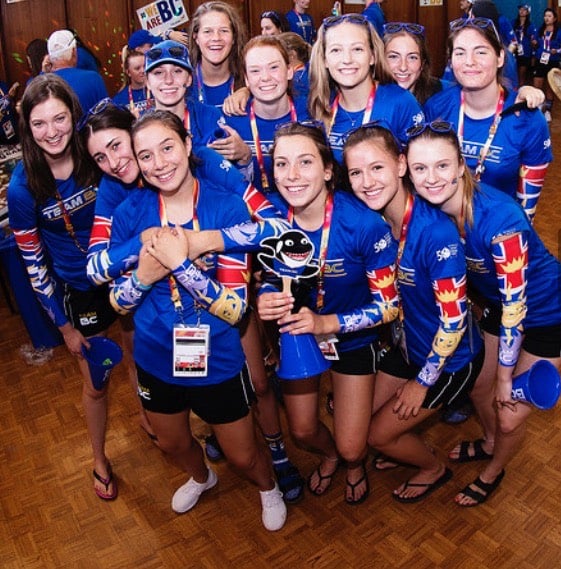 Team BC won their first game against PEI, however, they lost their second against Saskatchewan. Today they play Yukon, followed by Nova Scotia and Manitoba tomorrow to finish off their pool play.

The highlight of the games so far for Taylor-Parks has been meeting other players and trading pins. She says that the atmosphere of the games is amazing, and it is awesome how the other BC teams come together to support each other.

"There is a very strong and positive community within the province of BC," explains Taylor Parks.

This fall Taylor-Parks will be taking general sciences at UBCO while she plays on their varsity team. 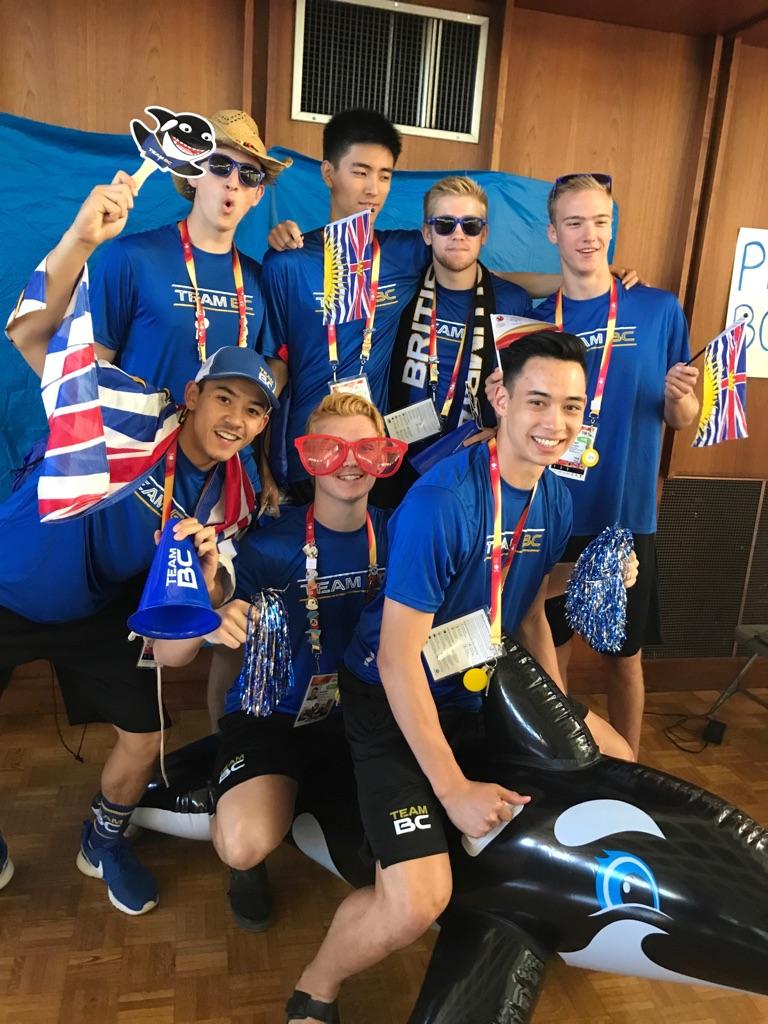 Bobby Blaskovits is an 18-year-old Mount Boucherie High School graduate. He has been playing volleyball since seventh grade, citing playing with older players as a good learning experience.

Blaskovits has been on Team BC since he was 14, though this is his first time being named one of fourteen athletes to represent at the Canada Games.

The men's volleyball team arrived in Winnipeg on Saturday, and began the competition on Monday with a three set victory over Yukon. Their next game, against Saskatchewan, was a straight set as well. Up next, the team takes on Quebec.

The best part of the game for Blaskovits has been getting the chance to meet athletes from across the country.

"I have already enjoyed training alongside some incredible guys both on and off the court and have made some great friends from all over the province," said Blaskovits. "I know I will continue to stay in contact with many of them for years to come".

Next year, Blaskovits will be playing volleyball for Douglas College, where he will continue to improve his skills and game. He hopes to play university ball following that, but says that regardless of what happens he will always be involved in the game somehow, whether that be coaching or playing. 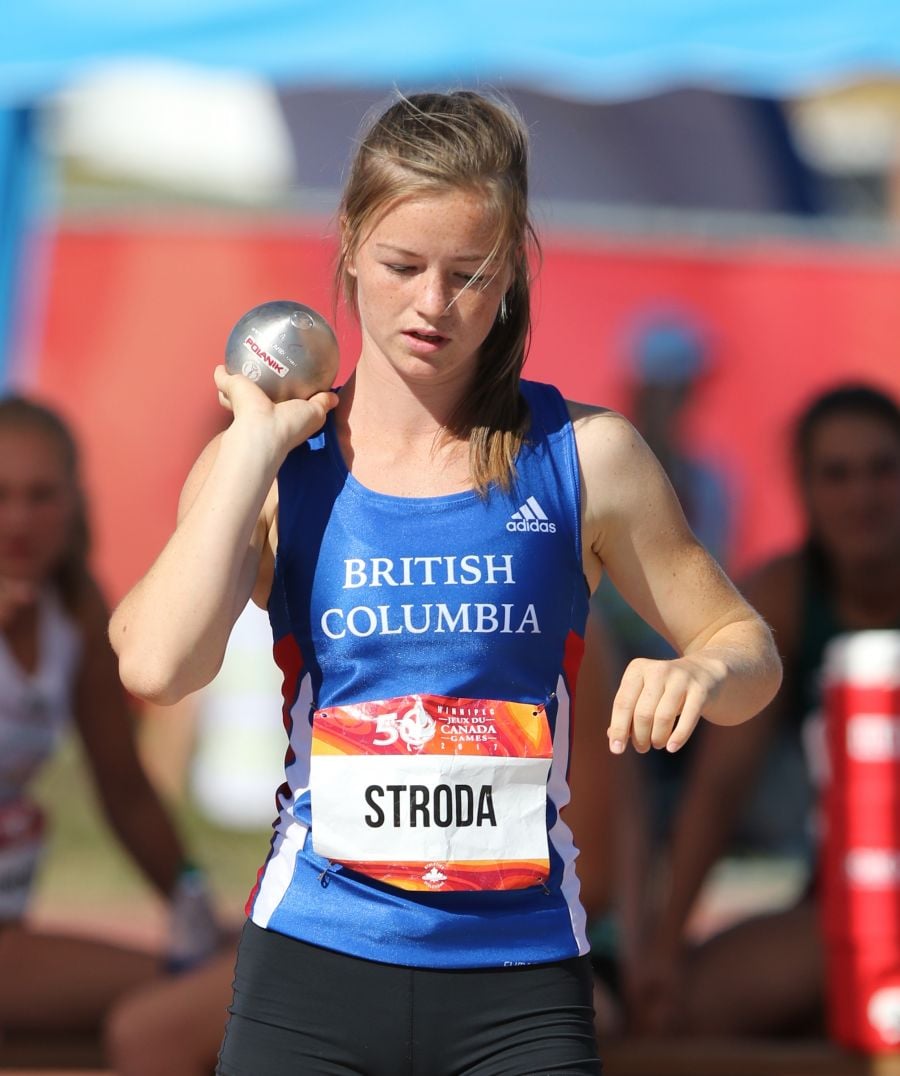 Muriel Stroda is a 16-year-old Okanagan Mission Secondary student, who began competing in track and field in 2012. She is no stranger to the sport, as both her mom and brother have competed in the sport.

Stroda's strengths lie in the multievents, in which she placed first at the BC Championships for her age group, and is currently ranked 5th in Canada in the youth category.

One challenge that comes with being on the younger end of the age spectrum for the games (16-22) is the fact that she has to compete up for many sports. The typical hurdle height for her age category is 30", while the games compete with a 33" women's hurdle height. The shot puts used at the games are 4 kg instead of the 3 kg weight she usually competes with, in addition to the heavier javelins used at the games.

After competing last week, Stroda placed 10th overall out of 15th athletes. Some highlights of competing for Stroda were setting personal bests in 100m hurdles, shot put and javelin throw.

Aside from the sports, she thoroughly enjoyed meeting other talented athletes from across the country.

"Trading pins and clothes with athletes from other provinces was fun and has created lasting memories," said Stroda.

Now that the season is over, she is taking a well deserved break from sports... that is until they pick back up again in September. 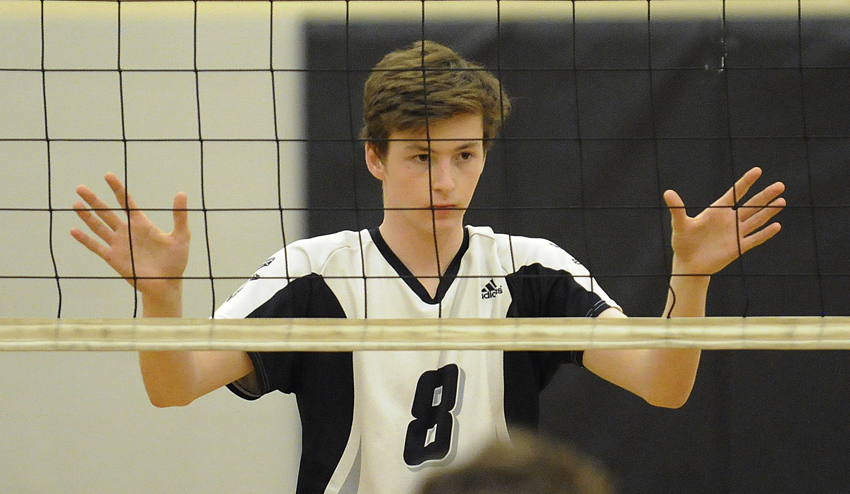 So far at the Canada Summer Games, they are two and zero, having won against Yukon and Saskatchewan. Later tonight, in an important match, they will play Quebec.

"My favourite part of the games so far has been being able to support other teams on their sports," said Nichols.

Up next for Nichols is attending UBCO, where he will play for the UBCO Heat. 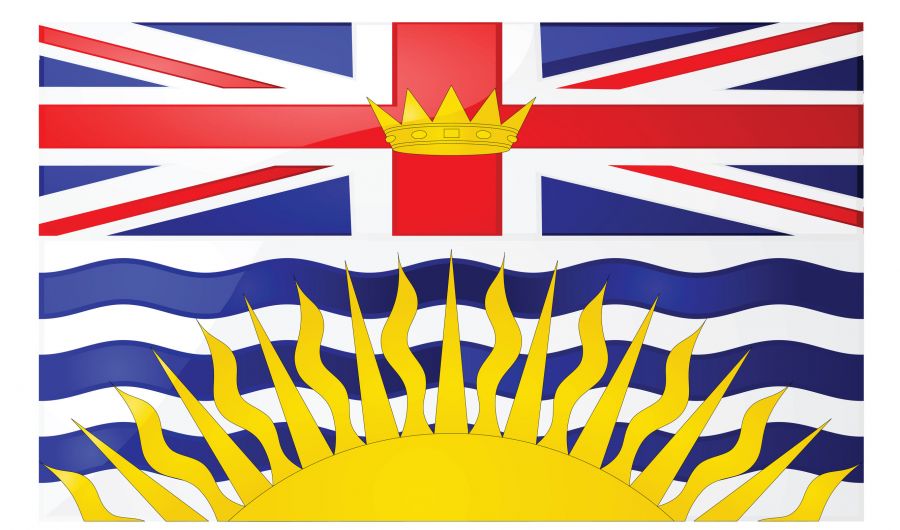 Congratulations to all the athletes on their accomplishments! The 2017 Canada Summer Games will continue until August 13th. For more information on the games, check out their website.

Are you at the 2017 Canada Summer Games? Email us at news@kelownanow.com and tell us about your experience.