Chris Van Hooydonk takes us to the back porch of his farmhouse situated halfway between Oliver and Osoyoos.

Above us, massive garlic plants hang from the rafters, curing in the dry, warm Okanagan air. And all around us, fruit trees - big, mature trees, their branches heavy with peaches and plums and apricots and whatever else that's ripening in early August. 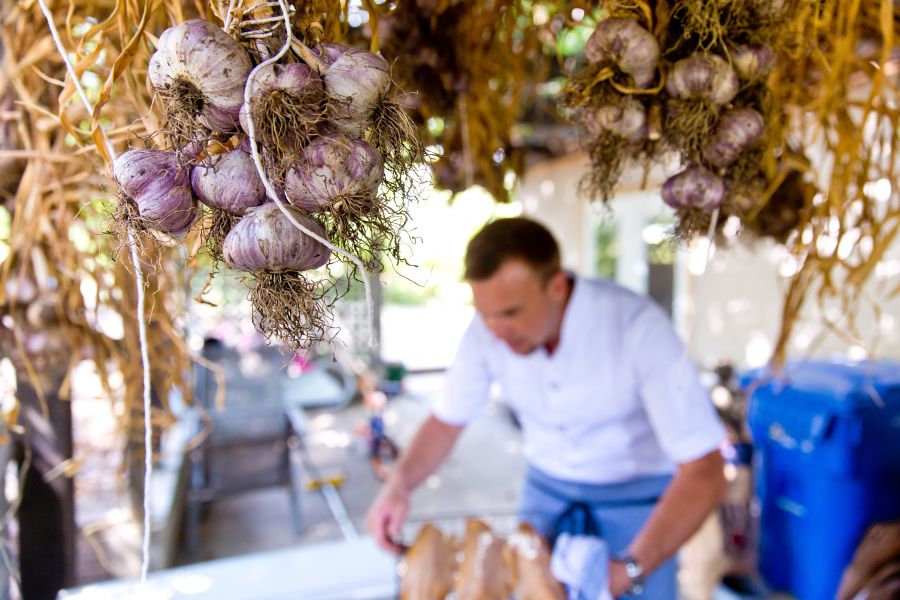 But Van Hooydonk didn't bring us to his idyllic old-school porch to check out the produce. Instead, he brought us here for the fish. Arctic char, to be exact.

He opens the door to a smoker, lets us look inside and breathe in the amazing aroma, and explains. 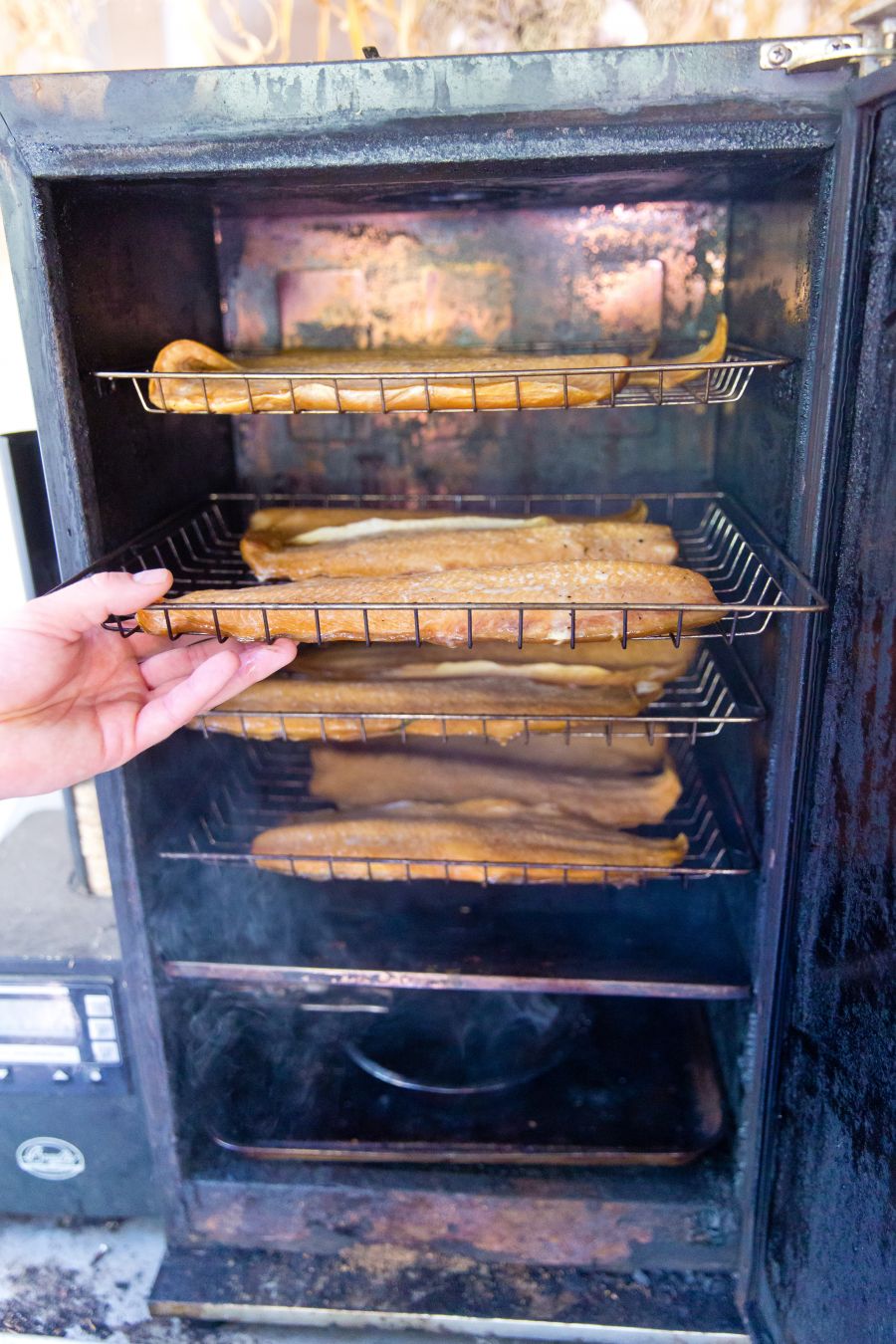 "This," he says, "is 'Road 17 Arctic Char'. It comes from a family-owned business called DelicaSea, just a few kilometers from here. They raise cold-water fish in the only dessert in Canada. It's stunning. It's the future of aquaculture."

And, he says, "It's one of the most exciting things we currently put on our menu."

Menu? Why, yes. Van Hooydonk's farmhouse, you see, isn't simply a farmhouse. It's also home to one of the most unique farm-to-table dining experiences in the Okanagan. It's called Backyard Farm Chef's Table, and today the owner and chef is giving us a crash course. 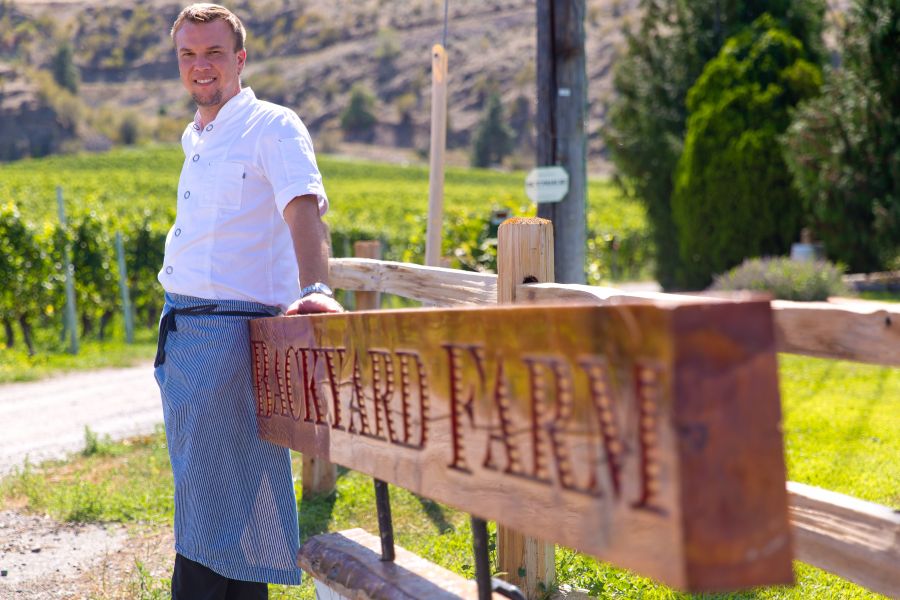 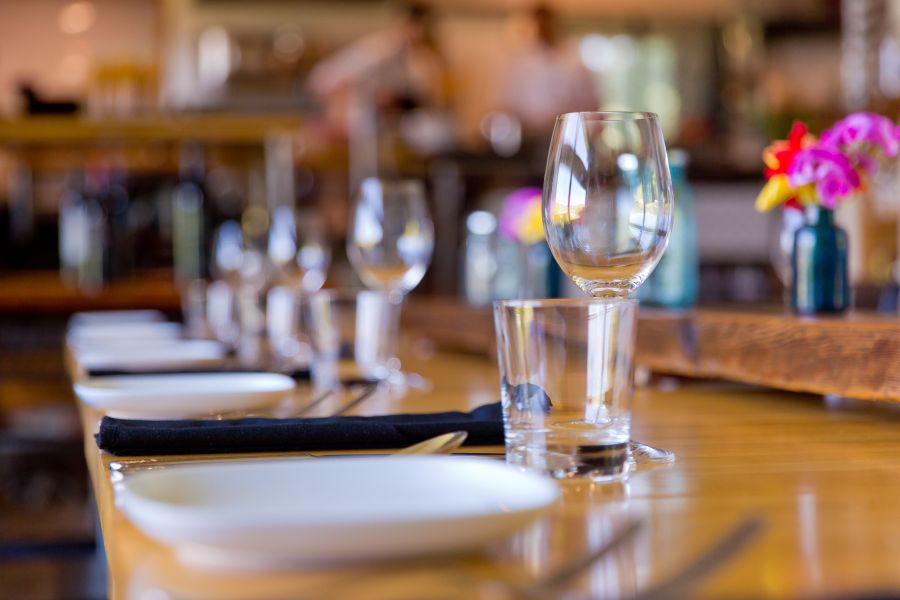 He starts with the Arctic char. It's locally sourced, it's ethically raised and harvested, and it's crazy fresh - the three principles intrinsic to Van Hooydonk's operation.

"It's Ocean Wise certified, which means biologists assess how they handle and harvest the fish. They actually put them to sleep by pumping CO2 into the tank. There's no stress, which makes a big difference to the fish and to its quality." "And it really can't get much fresher. On Monday I sent a text message, on Tuesday the fish was dropped off, and yesterday we did all the work on it. And now we have it here in the smoker, basically within two days."

Back inside, Van Hooydonk hands off the char to Backyard Farm's chef de partie, Kyle Campbell. Second Apprentice Jack Van Dyke is busy chopping veggies and all three are working in a kitchen that's more than a kitchen. It's also a stage. 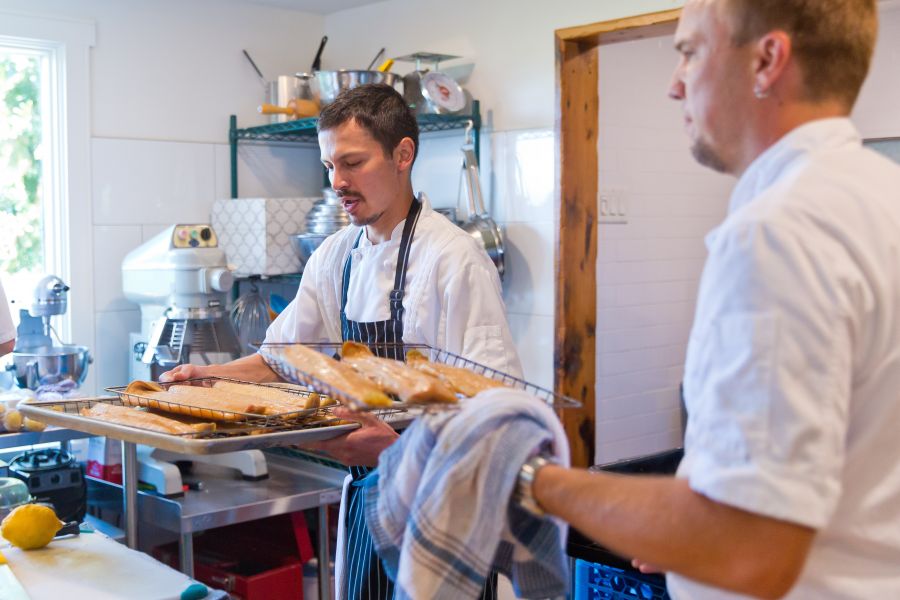 And that's a big part of the allure. At Backyard Farm, the kitchen space is wide open to the dining space and raised a couple feet above it. Not only are guests encouraged to watch their meal being prepared, they can freely mix and mingle with the staff as they do it. "We want our guests to come up and ask questions and be involved in the culinary demonstration," says Van Hooydonk. "You're fully accessible to the entire premises."

Campbell is now making corn crema. He explains that it's made "like a vegetable stock. We're cooking it down with onions and garlic, white wine, tarragon, bay leaf, and some whipping cream to help build a little richness. It'll then be pureed." 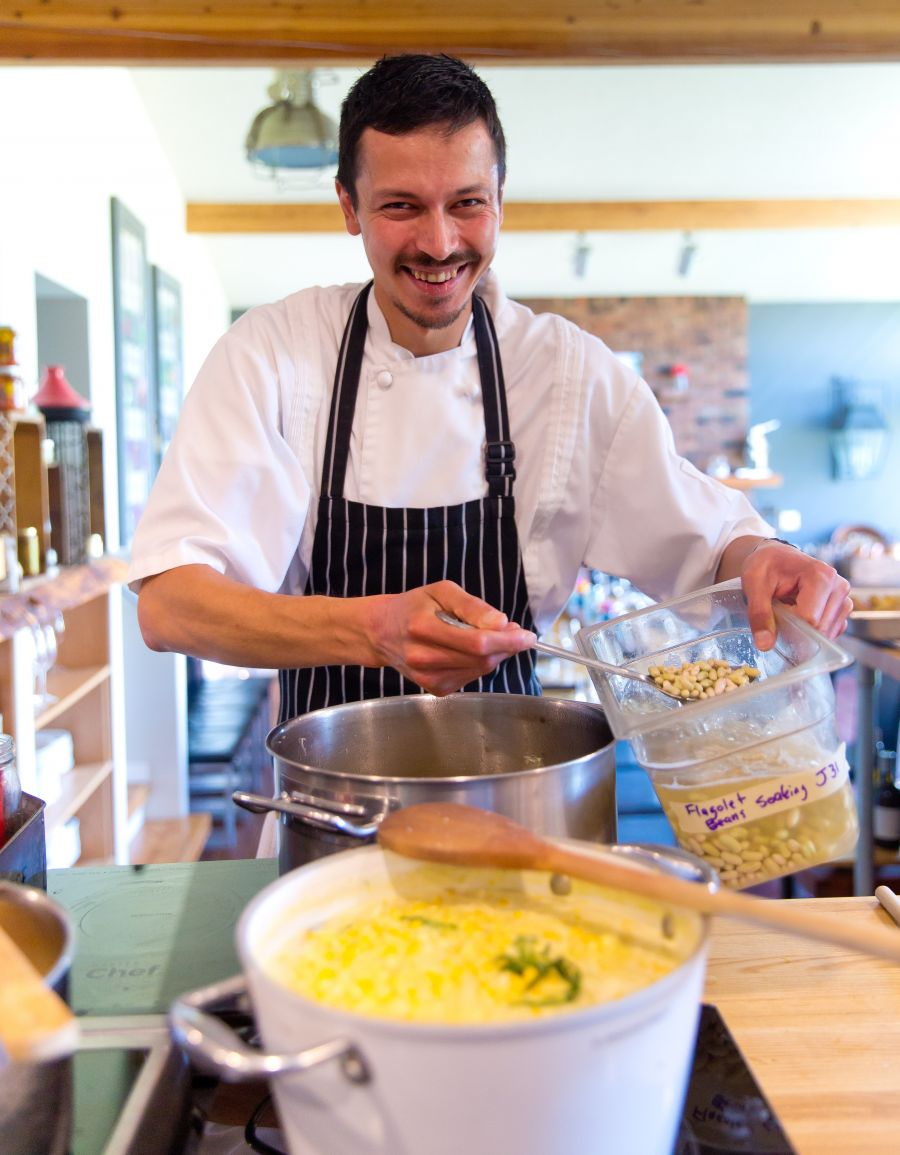 The corn crema, says Van Hooydonk, will become the sauce for pan-roasted sable fish that was likely caught yesterday and will arrive later in the afternoon.

"And we'll have some tree-ripened peaches that we're just going to pick in the backyard, then grill, and some of our vine beans - we grow three variety of beans - which my wife will be picking any moment." 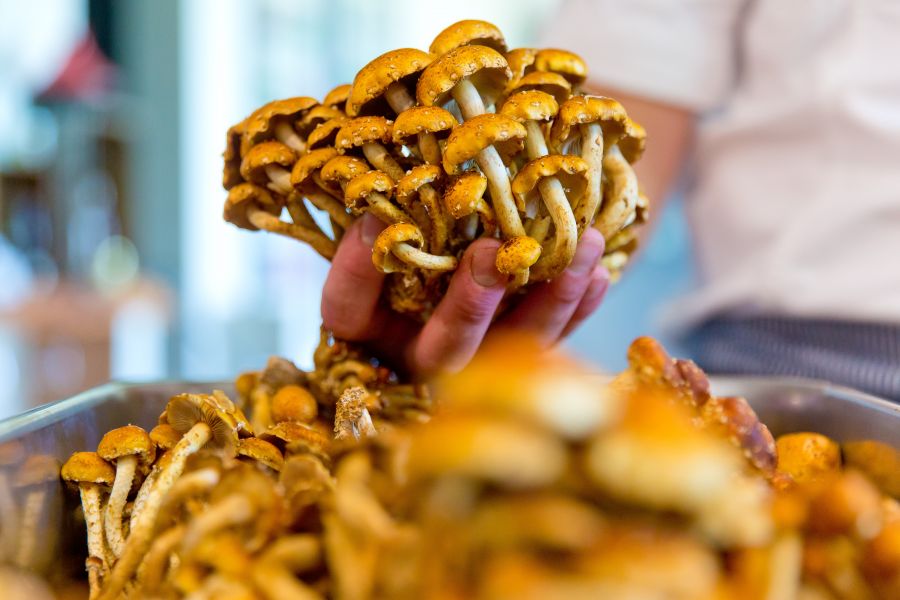 Van Hooydonk's journey to this place in his life was as long as it is impressive. Red Seal certified in 2001, he honed his craft at such geographically diverse restaurants as the Harvest Dining Room in Kelowna, Chef Bernard's Cafe in Whistler, the Four Seasons Hotel in Boston, and, most recently, as executive chef at Oliver's own Burrowing Owl Winery. "Now we're in our sixth season at Backyard Farm," he says. "In 2014, after taking the Community Futures Program, my wife (Mikkel) and I decided out of pocket to do the very intensive renovations on this old farmhouse and launched Backyard Farm six months after that." 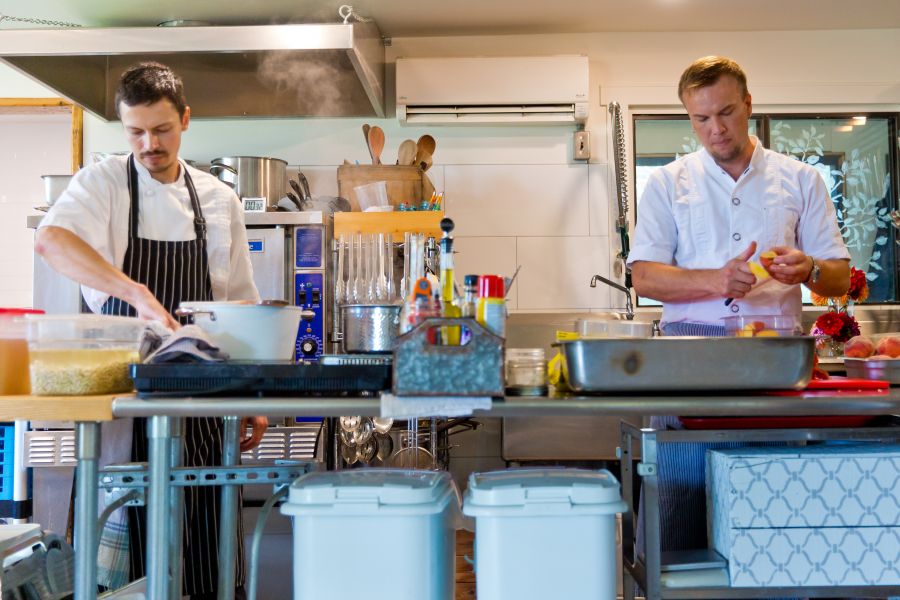 To Van Hooydonk, it's a logical progression. As the years went by, he became increasingly immersed in food culture, in ensuring sustainability, and in the concept of growing your own.

"I want the opportunity to be a farmer, a chef, a father and a mentor (the couple has two young girls), and a better husband. I work harder than I ever have, but I'm also much more inspired and far less stressed." 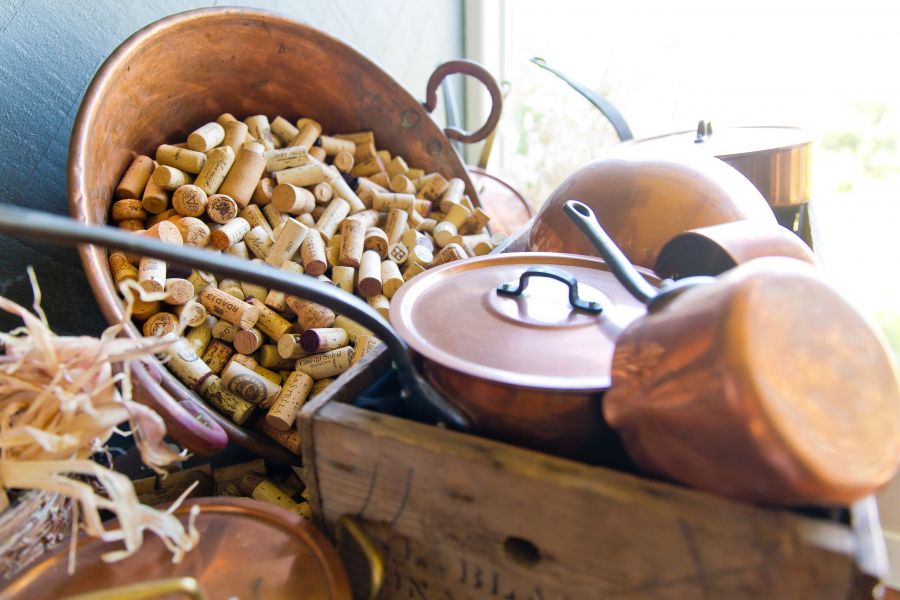 It's important to note though that you can't simply show up at Backyard Farm and expect to be served. The venue caters to groups and advance bookings only, and works hand in hand with its guests to create sophisticated, customized menus comprised generally of in-season food. 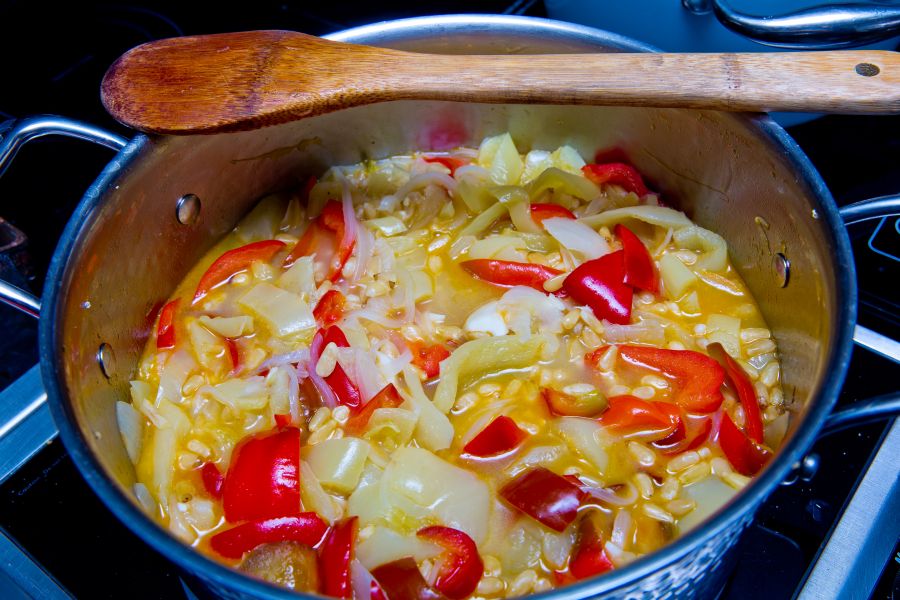 Careful attention is also paid to dietary restrictions and food allergies. Knowledgeable wine pairing suggestions are also offered with each tailored meal, though the venue does not supply wine. Instead, customers are welcome to bring their own. There are no corkage fees.

The result? A distinctive experience that keeps the place booked months in advance during the warm months and often attracts visitors from far-flung locales. Van Hooydonk says a typical evening at Backyard Farm will run three to five leisurely hours. "We never do two dinners in a single night. The entire facility is for you and your guests. And, time permitting, we'll offer a farm tour as well."

A four-course meal - two appetizers, a main course, and a dessert - is standard fare, though six, and even seven-course extravaganzas are not uncommon. But that doesn't even begin to describe all that goes into the menu. Check out the board below for a better idea. 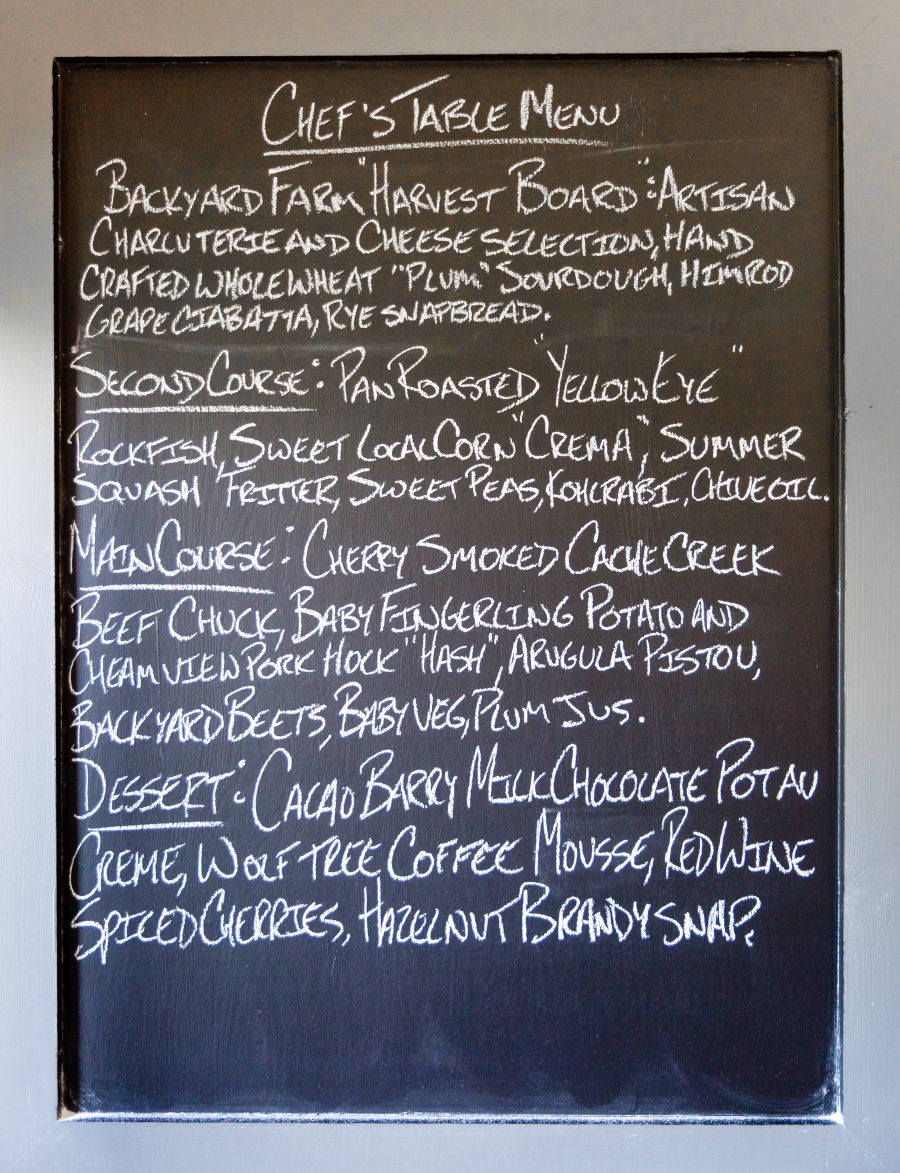 Later, we walk the property. There are a hundred fruit trees in all, mostly older and producing one heck of a bounty. And there are veggies galore, including multiple varieties of heirloom tomatoes, cukes, a wide range of beans, edible flowers, and much, much more. 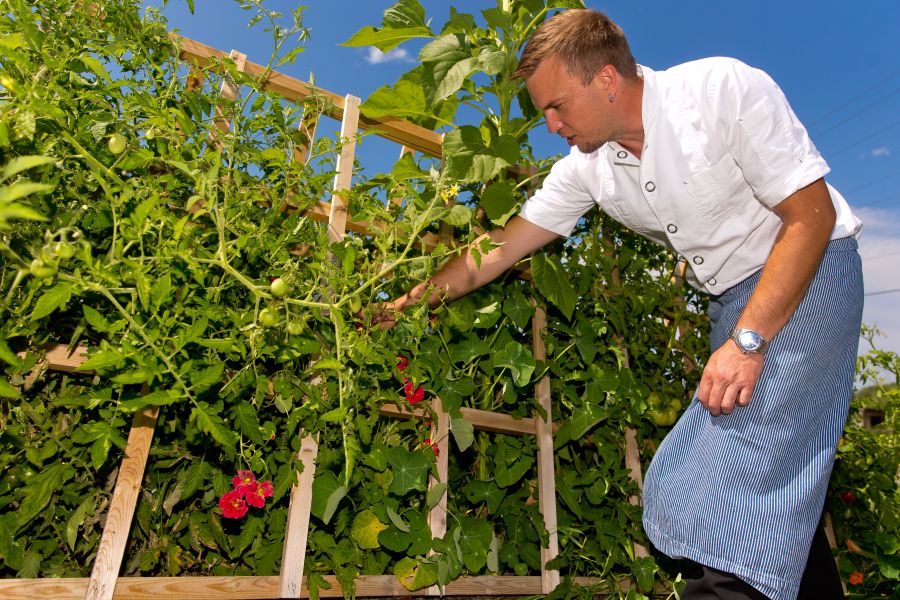 There are chickens. Van Hooydonk says they're "aerating and fertilizing, and they lay eggs that we use in the menus. We move them around every five days so that they go under the fruit trees and spread their wealth, so to speak."

Must be working. Many of the peaches were the size of grapefruits. That they tasted better than they looked is no small compliment. 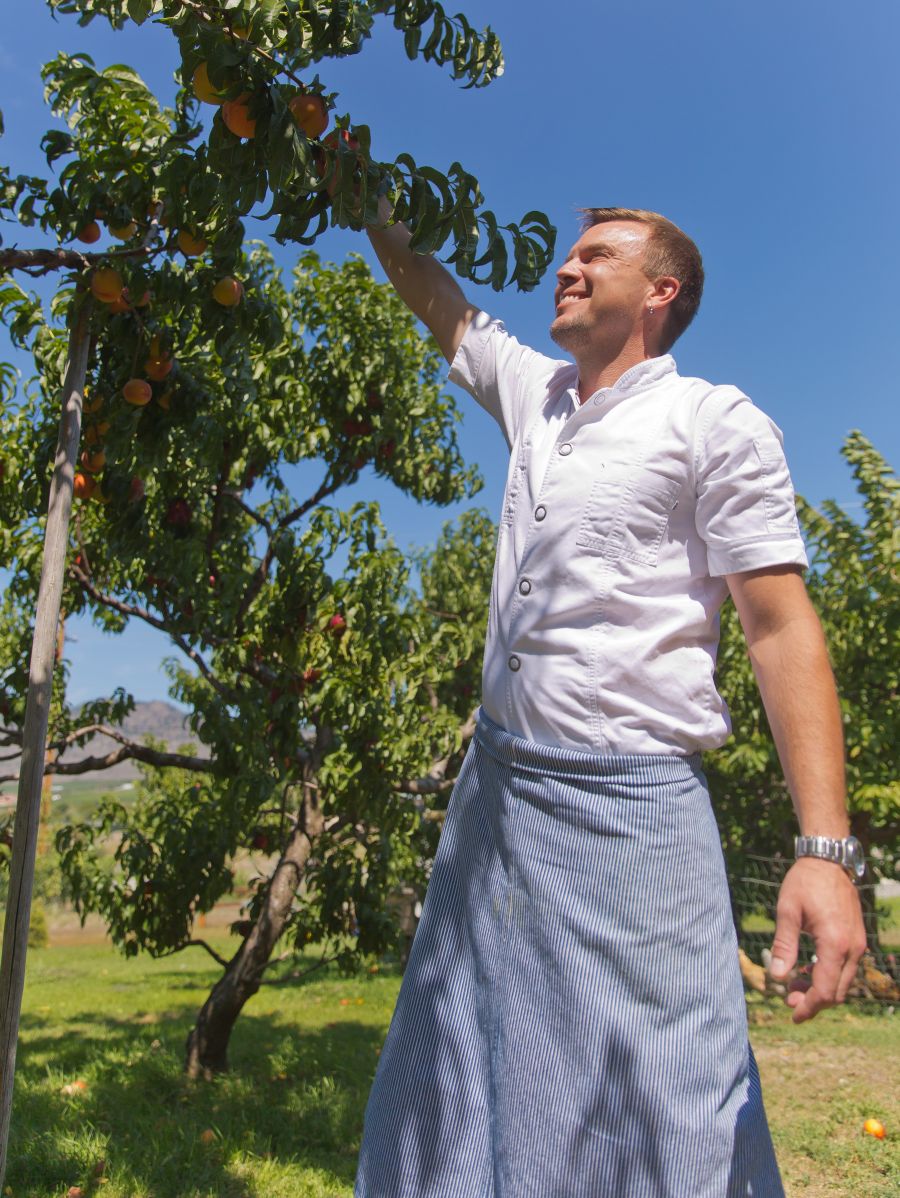 Backyard Farm Chef's Table can host groups up to 20, though Van Hooydonk says ten to 14 is the ideal number. A three-course meal is approximately $80 per person, plus tax and an 18-percent gratuity. "If the experience outweighs the cost, then I'm a pretty happy guy and I sleep well," he says.

For more information and to check Backyard Farm's availability calendar, head to the venue's website. Be prepared to book well in advance. We think it's worth the wait.